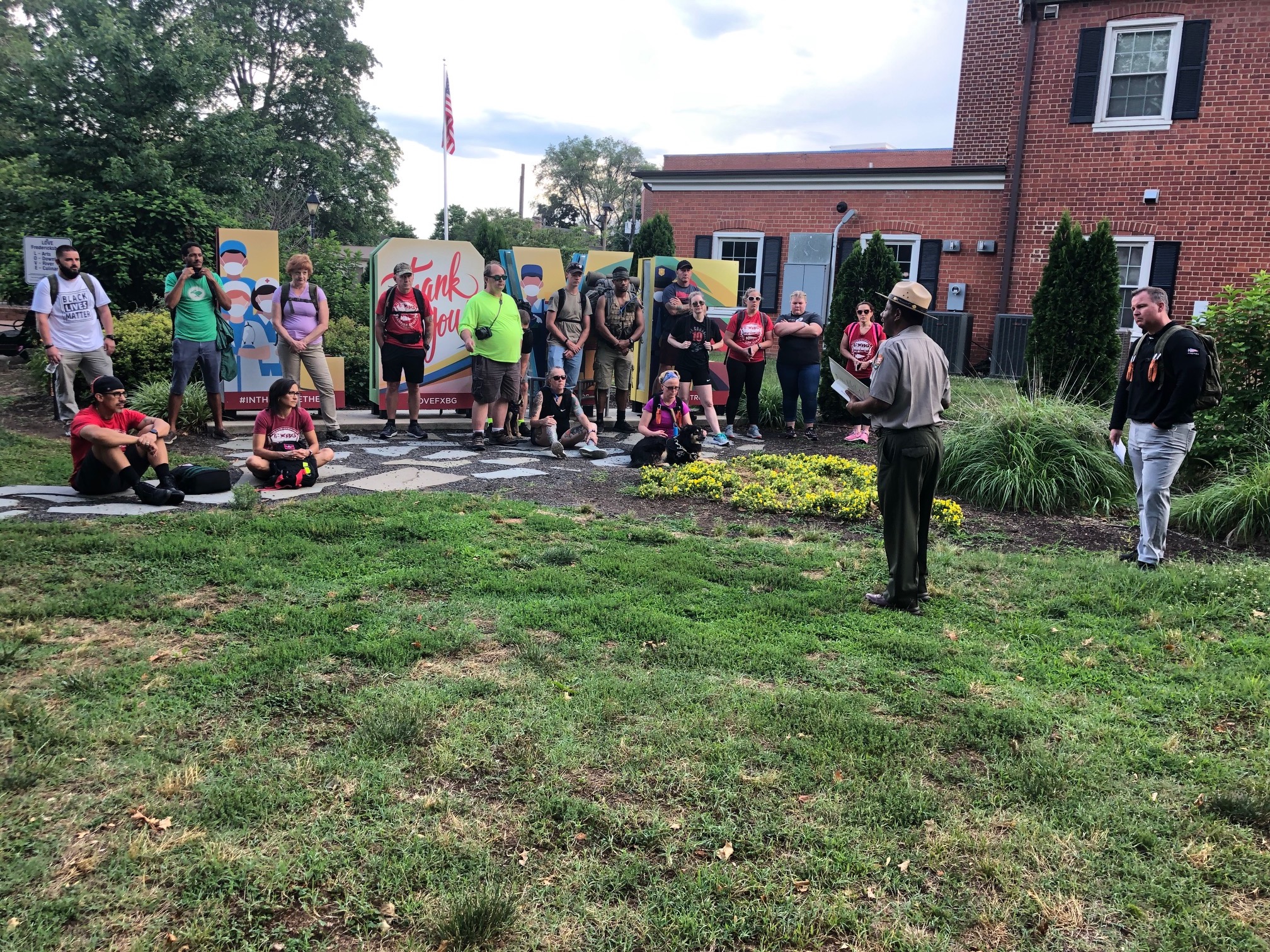 For GORUCK’s One Team One Fight Callout, a group of us organized a “Differing Perspectives” Ruck and a Juneteenth Ruck in Fredericksburg, VA. What most people do not realize (I didn’t until just a few days ago) is that for some time the Rappahannock River here in Virginia separated the Free and the Slaves. On one side of the river he or she was “property” and on the other side he or she was “person.” We decided to rucked both sides.

We took the route that John Washington took on Good Friday 1862. In the morning, he was a slave working in what is now the “Soup and Taco” on Caroline Street, but later in the day he was a free man over very close to where John DeBaptiste is buried in Falmouth Cemetery.

It was about five miles round trip. It should remind us that we can, with a little effort, see the nuances of different perspectives. It can feel difficult or scary or shameful. That is all part of it. I am very grateful for the challenge us with this GORUCK Club Callout because it has truly changed my perspective.

For the Juneteenth Ruck, we first traveled back another four score and seven years to talk about John DeBaptiste, a free black man that fought in the Revolutionary War. He served on one of Fielding Lewis’ (brother-in-law to George Washington) ships called the Dragon. After the war he ran a ferry to cross the Rappahannock. It was called  “French John’s Wharf.” Today that wharf is an empty lot owned by the City that is currently overrun by bamboo.

My goal is to have the city reopen French John’s Wharf in DeBaptiste Family Park. A place for folks to put their kayaks, paddle boards and tubes into the water and to fish. This park would also honor John’s grandson George DeBaptiste who was born in Fredericksburg but led an exciting life as a steward to President William Henry Harrison and ultimately an abolitionist who took 30,000 people to freedom in Canada.

Towards the beginning of the ruck we were lucky enough for Steward Henderson from the National Park Service to join us and enlighten us about General Order Number 3 and then our first leg through Free Alley to the grave of Dr. Urbane Bass. He was the first African American physician in Fredericksburg and he volunteered to serve in WWI and was KIA in October 1918. He was posthumously awarded the Distinguished Service Cross. There is of course much more to his story that I will tell you about if you come to visit the area. He is memorialized in a stained glass window in the Shiloh Church on Princess Anne. My goal is to get a real Memorial for him in our local community.

The next leg of the ruck began at 900 Princess Anne, a building was used by the Union governor of Fredericksburg during the occupation that began in April 1862. Abraham Lincoln stood on the steps to the building behind me addressed troops and townspeople in May of that year. We read the Gettysburg Address and talked about “the great task remaining before us.” We then moved down to Market Square and talked about John Washington who was a slave that escaped from Fredericksburg on Good Friday 1862. 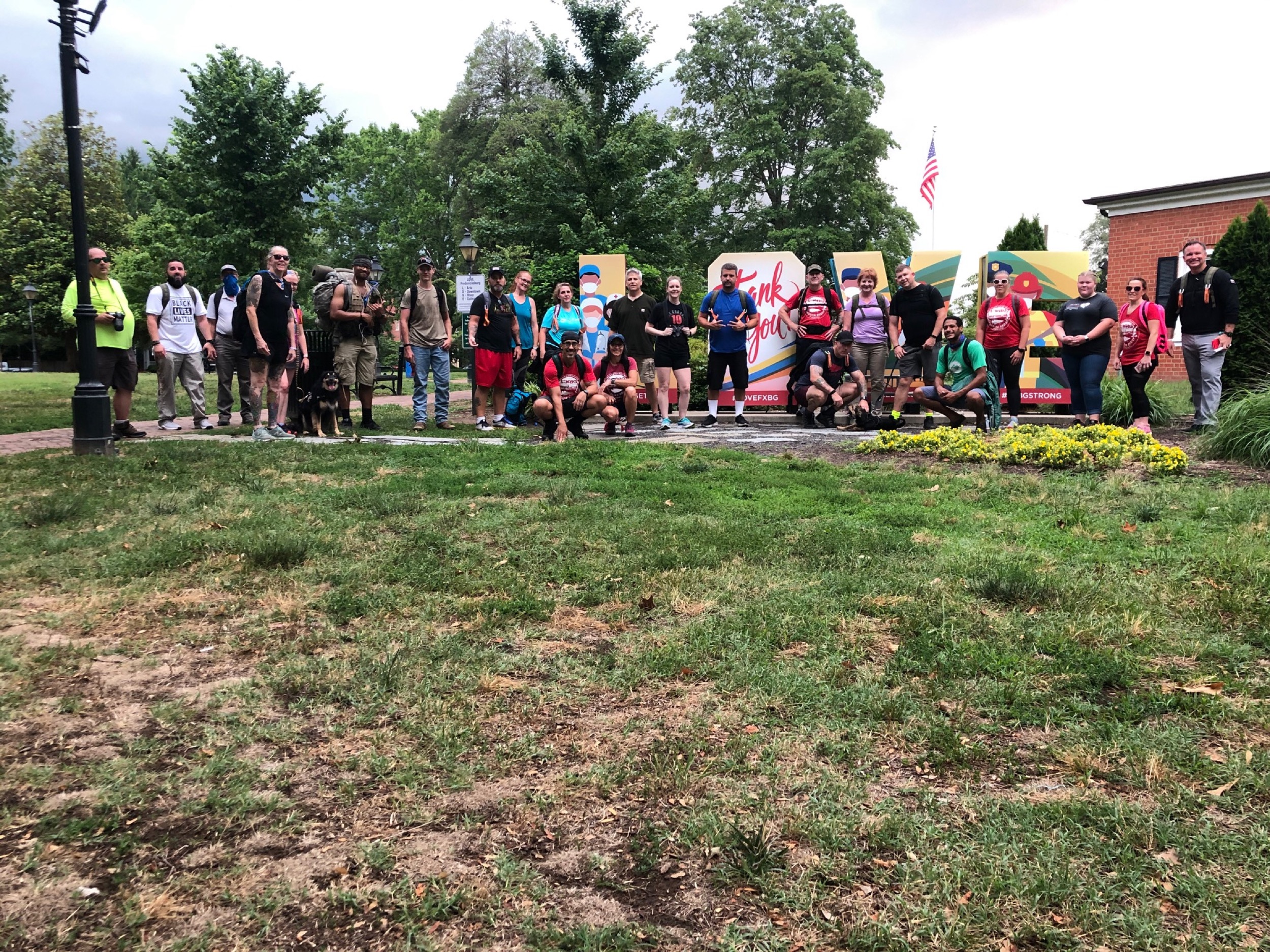 It was an honor to celebrate Juneteenth together and learn about our local African American heroes. Thank you to Steward Henderson and the National Park Service for providing us the background on General Order Number 3. If anyone who reads this wants to visit Fredericksburg I will gladly take you rucking on this route. I will tell you the stories of John DeBaptiste, George DeBaptiste, John Washington and most assuredly I will tell you all about the American hero Urbane Bass.

Chris Ruble is a GRT who enjoys history and the leader of the FXBG Rucking Group.