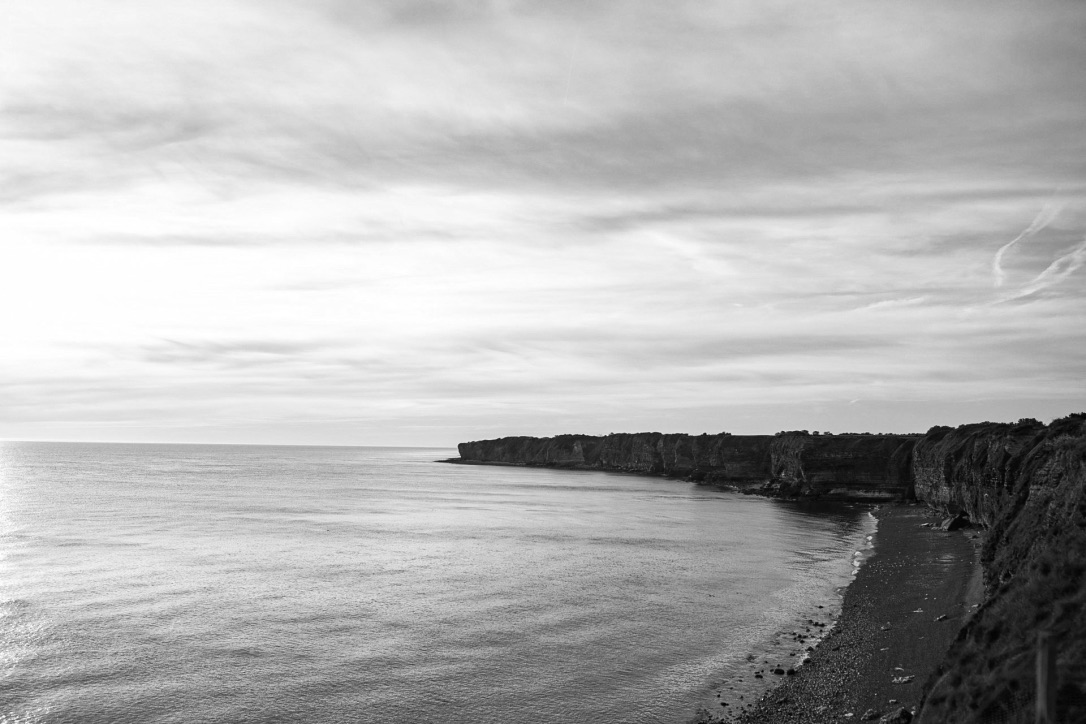 “We’re here to mark that day in history when the Allied peoples joined in battle to reclaim this continent to liberty. For four long years, much of Europe had been under a terrible shadow. Free nations had fallen, Jews cried out in the camps, millions cried out for liberation. Europe was enslaved, and the world prayed for its rescue. Here in Normandy the rescue began. Here the Allies stood and fought against tyranny in a giant undertaking unparalleled in human history.” – Ronald Reagan, Pointe de Hoc, June 6th, 1984

On June 5th, on a hot, clear night in a Nashville suburb, twenty-eight stood in formation to begin one of the first GORUCK events held in three months. With much of normal life having been shut down for so long, returning to our ranks with both GRTs we knew and ones we didn’t felt exciting, heady and not insignificantly, like the first deep inhale after a period of labored or restricted breathing. A worldwide pandemic which took the ease of breathing from so many, both temporarily and permanently, had changed us and this return to a favored pastime was not left untouched. Yet in recent days the effects of COVID-19 seemed to fade to background as our nation grappled with grief and newfound awareness of the many issues that led to the death of a man who begged for breath as life was unjustly denied him.

In short, the night was charged with expectation in a way I felt I’d never experienced before. Then it hit me that this felt all too familiar. This felt much like the night I trepidatiously returned to Ft. Bragg the year after we lost Jerome Gonzales. I’ll never forget the feeling in the air that night as we stood together, unsure of so much but unshakeable in our determination to stand as a community and as individuals. Last Friday, we stood to persevere through what’s happening in the world today by honoring the actions of 225 Rangers in their invasion on Pointe de Hoc on June 6th, 1944. 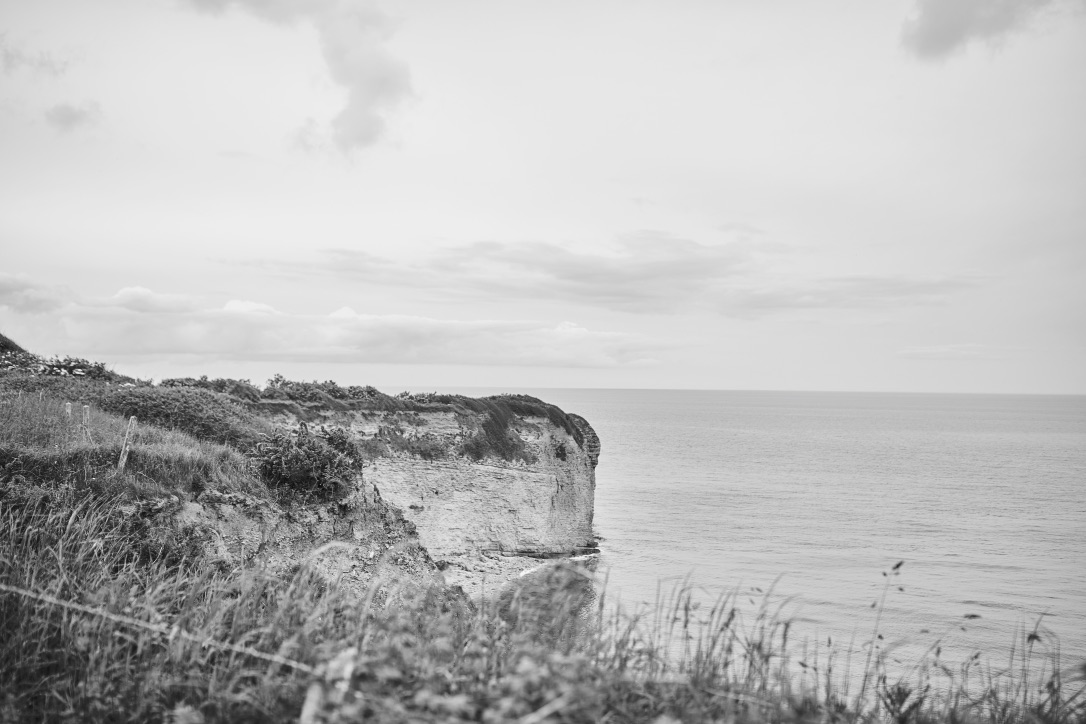 “At dawn, on the morning of the 6th of June 1944, 225 Rangers jumped off the British landing craft and ran to the bottom of these cliffs. Their mission was one of the most difficult and daring of the invasion: to climb these sheer and desolate cliffs and take out the enemy guns. The Rangers looked up and saw the enemy soldiers — at the edge of the cliffs shooting down at them with machine-guns and throwing grenades. And the American Rangers began to climb.”

Two of today’s American Rangers began to lead us. As the admin session began and the Cadre introduced themselves, it was evident to anyone who hadn’t previously known that our events were to be led by two Army Rangers, Cadre John Belman and Aaron Hand. More importantly, two Rangers who had participated in another well-known mission, the Battle of Mogadishu in 1993. The stage was set to see the history and role of Rangers from both distant and not-so-distant points in history.

In the weeks preceding the events, HQ and the Cadre kept us well-informed of the process of making decisions on whether or not they would take place. The Nashville events were allowed to continue primarily because the Start Point was already set in a suburb well outside the city. In the days prior, Cadre communicated frequently with local police and park staff to minimize the risk of us being mistaken as a threat. Numerous precautions were also taken to allay fears over possible transmission of COVID-19, including instructions for participants leading up to the events. 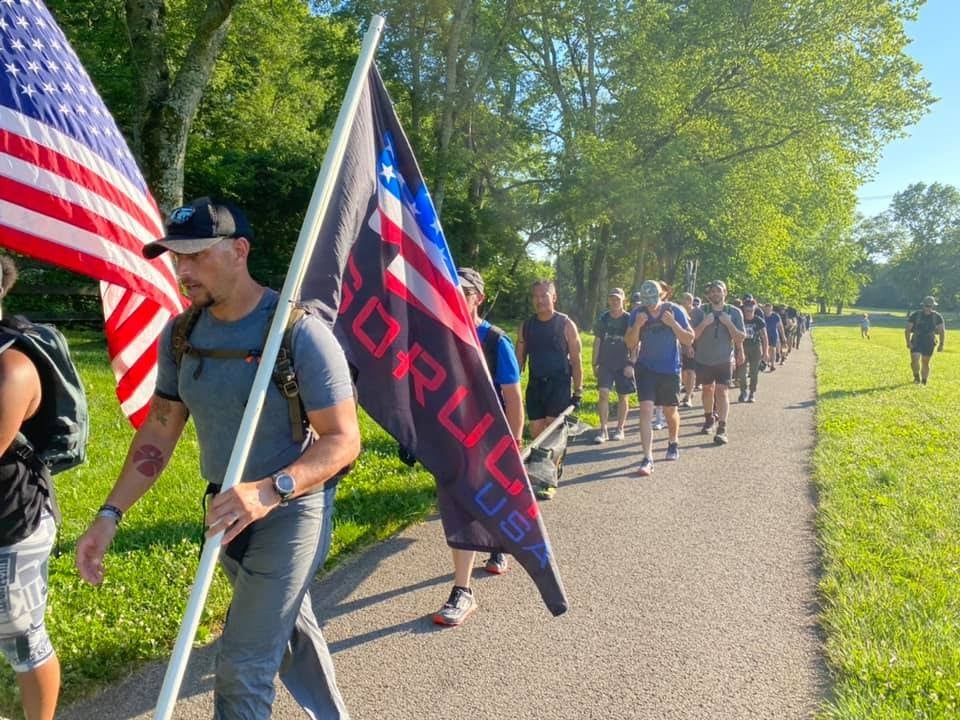 During the admin phase of each event, we were told that disinfecting wipes and disinfecting spray designed specifically for fabric were available and we were encouraged to use them at any point we wished to. As previously noted in social media posts, there were none of the typical event elements that would have had us in close proximity to each other, e.g. buddy carries, tunnel of love. While I don’t know that anyone utilized the wipes or spray, eliminating those PT elements made a lot more of a difference at keeping us apart than I thought.

Like most any GRT, I wondered how not being able to carry sandbags would affect the event. Would it even feel like an event without the grind of hundreds of pounds of weight to carry and swap among us? The answer is, of course, yes. Cadre are not one-trick ponies and sandbag carries are a common but not the ultimate in team drudgery.

In short, we did have weight to carry and we did carry it together. We had four litters that each held at least 120# of weight. We also had two water jugs which were swapped around between the litters. The litters’ width did not allow for a two-person shoulder carry and a four-person carry would have had us too close to each other. I cringed when the cadre announced at the beginning of the Heavy that our only allowable carry was a low one. I thought my grip strength couldn’t hold up to a weekend of that but we worked out a system of switches and it never became an issue.

Another significant factor in this HTL was that the cadre had limited our AO to specific greenways and a park that would keep us largely out of sight. They were upfront in saying that this would limit our mileage and have us covering the same ground over and over. I can’t speak for everyone but I know at least some of us were happy to accept that limitation in order to just be out there again. Again, the Cadre clearly setting expectation and explaining certain decisions went a long way toward accepting changes we didn’t necessarily love. 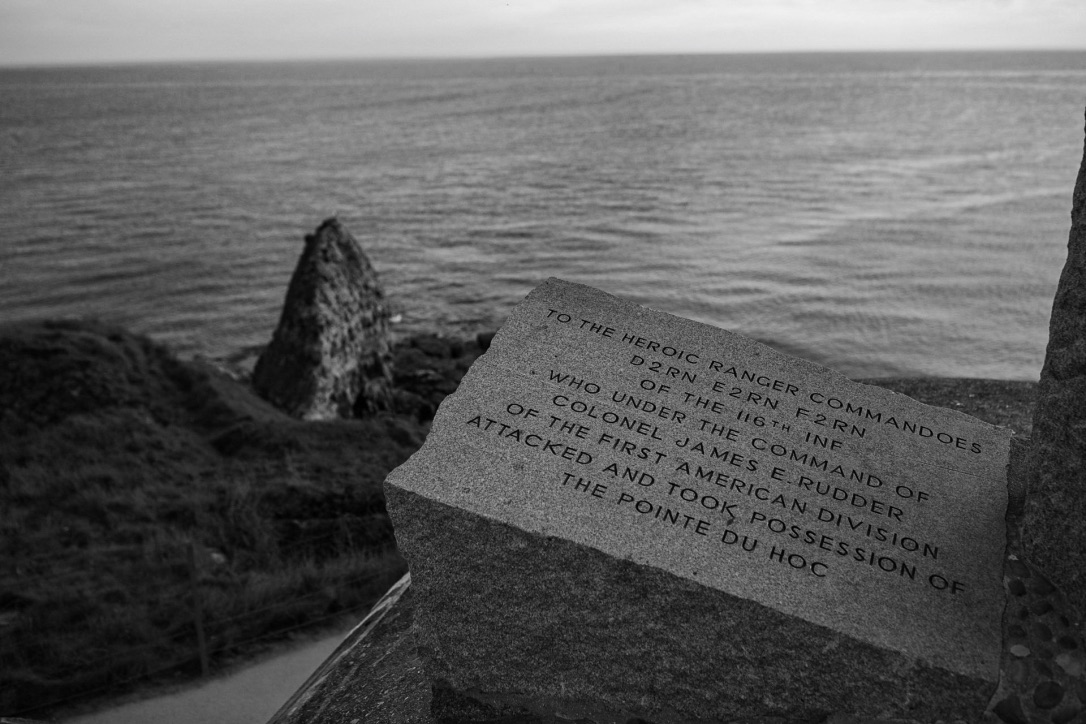 “They shot rope ladders over the face of these cliffs and began to pull themselves up. When one Ranger fell, another would take his place. When one rope was cut, a Ranger would grab another and begin his climb again. They climbed, shot back, and held their footing. Soon, one by one, the Rangers pulled themselves over the top, and in seizing the firm land at the top of these cliffs, they began to seize back the continent of Europe. “

This weekend could have been a long one full of discontent and discord over the state of the world today and the aforementioned changes to the event. But it wasn’t. It was litter carries and litter carries only and that’s what we did. We partnered up and divided ourselves into equal ranks. Either the TL or ATL kept interval time and the entire team would set down and pick up together. As one team or another would fall behind, that team would be instructed to move to the front. These strategies were consistent throughout the events. Further, the litter were used in PT sessions to great effect. Racing the length of soccer fields in two-person carry teams was no joke.

In my personal experience, the events of this weekend represented the most equitable workload of any I’ve done. By that I mean that I felt that I more equally contributed to the work needed. At 5’2” and 125#, I’m a desirable option as a casualty carry. I (and other women I know who are my size) often wonder if the guys realize how much we don’t want to be carried. We have to work harder and carry a higher percentage of our bodyweight to fully participate these events. (Frankly, the smaller of us carry a higher percentage of our BW in rucks alone.) We train very hard to be ready for that. The moment in most events where a guy turns around and points, “YOU’RE our casualty” is reliably deflating. Most often, they’re smiling like they’re offering us a welcome reprieve. I haven’t yet had the heart to burst that bubble and inform them that being carried will challenge your capacity to be comfortable with the uncomfortable like few other things. 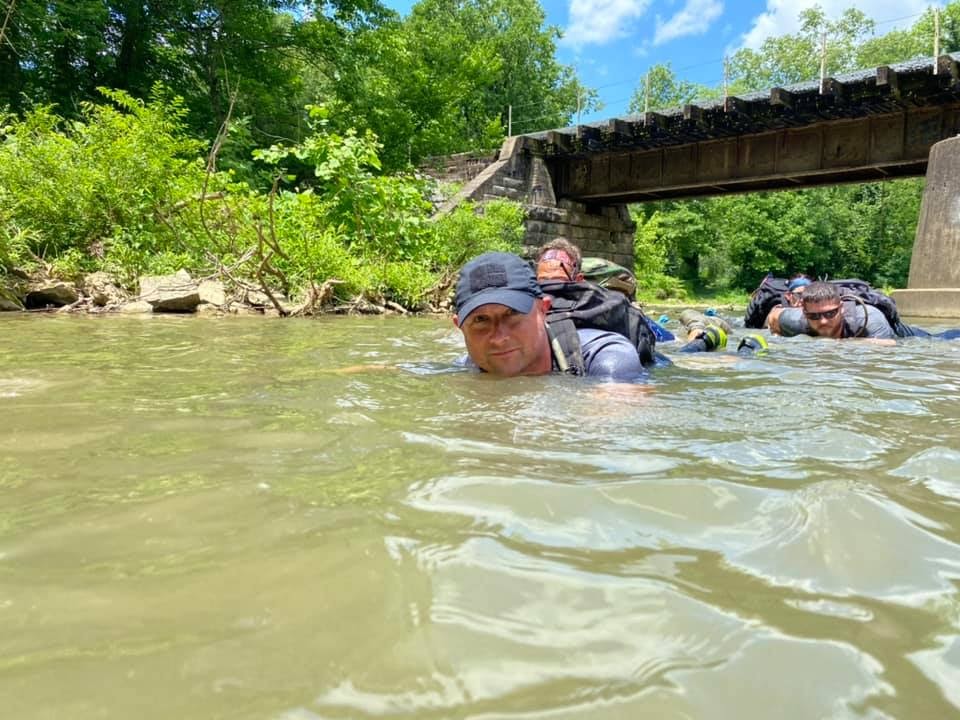 Similarly, these events brought to the forefront a common but infrequently discussed topic – stride length. I mean, maybe a short girl shouldn’t be writing this because I can’t help but sharing perspective from my vertically-challenged existence but I can only call the shots like I see them, right? While I was delighted that my grip stood to the test, I was continually dismayed at not being able to keep up with most of the team. It seemed more evident in this type of carry situation. My frequent partner, Teresa, who is even shorter than I, and I would try shuffling as we carried the litter but doing so meant recovering enough before our next turn was difficult. We were often deciding between walking at a pace that felt too fast for walking and too slow for shuffling. There really wasn’t a solution that allowed us to keep up in the way we wanted. Enter humility and dogged determination and we continued on.

The theme of this HTL was seamlessly woven into our tasks and efforts. Excerpts of Reagan’s D- Day speech at Pointe de Hoc on the 40th anniversary were read throughout each event. PT was designed to honor those killed and wounded (sets of 135 reps of various exercises, including ruck burpees) and to simulate what those two hundred and twenty-five men felt as they made landfall (log rolls the length of a soccer field to induce nausea and disorientation).

During each event, we spent time in a creek. We completed a half-mile-plus of litter carries through a slippery creek bed in both the Heavy and Tough. In each event, we low crawled through the water, providing both relief from the heat and humidity as well as ensuring that our feet were never, ever dry. 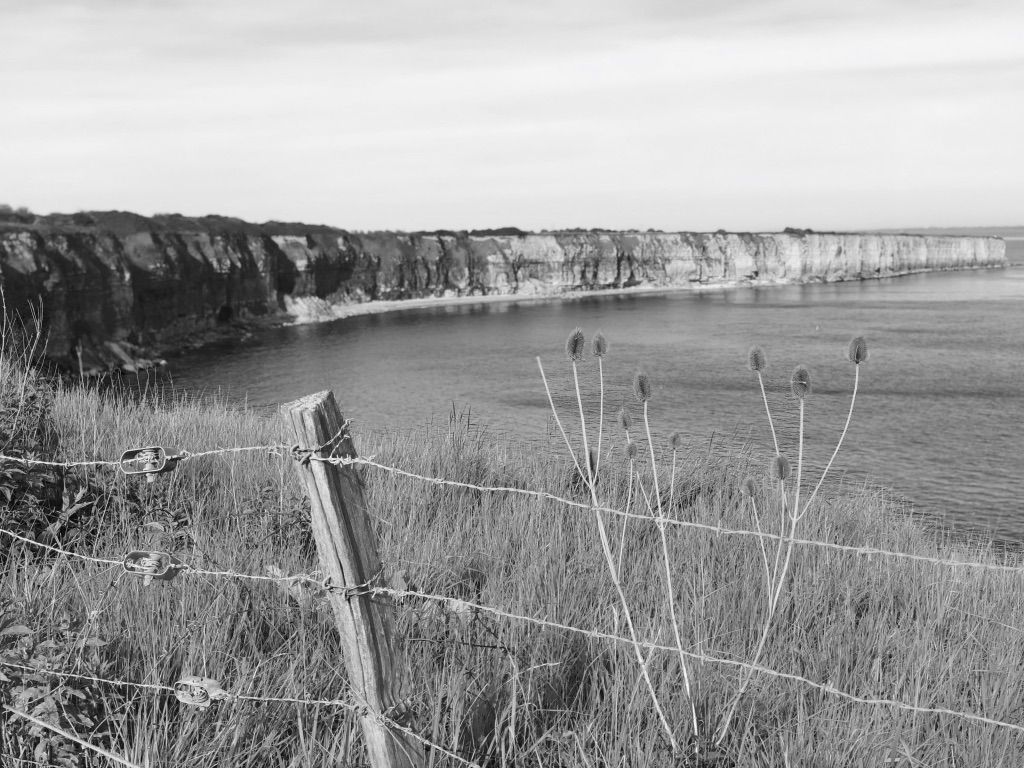 My exhaustion in the wee hours of Saturday morning could not steal from me the opportunity to be humbled as I heard a break of emotion in the voice of a Ranger as he read those words. As is the case in many institutions, the Rangers of today follow in the path of those of yesterday. To fight the same battles in the same wars is not required for unity for the same blood and the same belief flows within those who choose this manner of service.

Sure, I left this weekend with the HTL patch I hadn’t made time to earn before. But as with any GORUCK event, I left with so much more. In once again joining an unknown team to endure unknown challenges and to look back at a particular time in our nation’s history, I gained new strength and perspective on how I can face the challenges our nation is grappling with right now. Those challenges include growth in understanding, listening and compassion for those of different experience and perspective. Looking back is an excellent way to wisely move forward.

It was indeed a weekend of ‘building better Americans’ and Rangers led the way.

NASHVILLE HTL BY THE NUMBERS