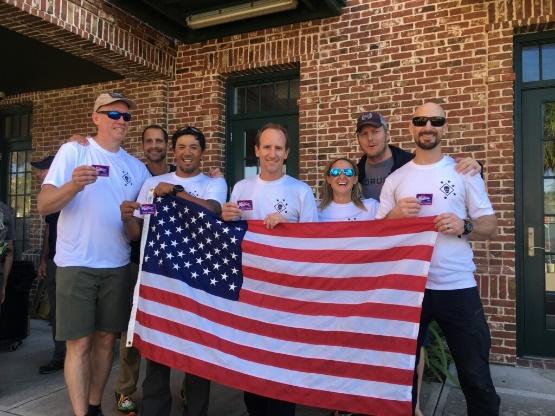 Mocha started yelling, I flinched. Wait can I talk to Mocha and Joel or is there still no talking? Approached cautiously. Did JC trick me into something? Big smiles and hugs….ahhh cool. Let’s roll.

Took us about 20 mins to figure out the app and load in our route. See above about event respect…know your gear.

Hit quite a few points around Scars and felt good banging them out. 1, 2, 3, 4, 5…we are just about half way there. Dang how far was 6 again? Wait what, private neighborhood? Yeah whatever we’ll get through. Jungle, not enough tiger stripe, deep mud, floppy 7 ft fence. Shhh they are watching tv, made it. High fives…hell yeah that just saved us….WE TOLD YOU GUYS NOT TO COME THROUGH! THIS IS A PRIVATE NEIGHBORHOOD. WE ARE CALLING THE COPS! YOU GUYS THINK YOU ARE CUTE SNEAKING UNDER THE GATE RIGHT NEXT TO THE GUARD SHACK! Wait what…no….umm…dude we are just exiting right here…see right there. NO, YOU ARE GOING BACK AND IF YOU COME BACK IN HERE WE ARE CALLING THE COPS! Seriously bro, why can’t we just go out right there…it’s like 50m away we are trying to leave. I’M CALLING THE COPS. Fine we’ll go back. WHO ARE YOU GUYS WITH ANYWAY? We are just doing a scavenger….WHAT? you know a scavenger hunt. WE HAD SOME OTHER PEOPLE SAYING SOMETHING ABOUT A STAR FORCE. Oh well yeah we are doing a scavenger hunt but we are all with the space force. TELL ALL YOUR SPACE FORCE FRIENDS NOT TO COME THROUGH HERE.
Sure thing.

Do yourself a solid and pick an awesome team. People you can be yourself around and know who you are so when you are too chipper and dancing while walking and someone tells you to quit being so happy; you know they are mostly kidding and you can ask them if they whined this much in the Marines. But in all seriousness the last thing you want is drama and people talking crazy and negative. We all had low points but overall, we had fun and did stupid stuff and talked about pointless things like how much money would it take for you do to this exact course again right when we finished? Crickets…..hey did you guys hear me? “There is no money.” “Maybe that big f*cking house. No, the bigger one.” “I’d rather do selection.” As with all GORUCK events, the body doesn’t remember pain but only the good times. So, a few hours later at some amazing seafood place with some cold beers we were already talking about where we’d meet for the next one.

Sh!t dude how far have we gone? Where was 6 again? Another fence? Oh, hey Mocha and Joel thanks for the oranges. On to 7. And so, it goes. You ever do a 20 mile overnight ruck. Know that feeling when you are done? It still feels the same except you’re not done.Now where was that golf course we can cut across….

Oh, and one last thing. Those red shoes…the ones I trained in over the summer and walked around Ohio in…the Star Course finally broke them down. I’ve got some black ones to try out now.