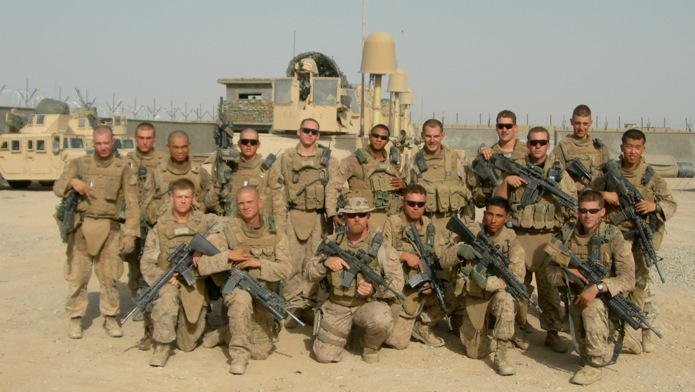 Dave served with Second Battalion, Seventh Marines, Golf Company, First Marine Division from 2004-2008, and deployed to both Iraq and Afghanistan. In his words:

“Six years ago I came back from Afghanistan 161 lbs. It was my third deployment with 2/7 G. I put on 90 lbs. Kept drinking really hard. Got into a dark place that I was having trouble working my way out of. Then I kept seeing all this stuff about GORUCK from Sal Rizo and thought. I remember that stuff. So I started walking my dog farther and farther from home. Then when we hit five miles I put on a pack. Then I started walking with a 25 lbs dumbbell in my pack. Then added on water bottles for weight. Then I got my GR2 and even more dumbbells. Now bricks. The other day I left my ruck at home and went for a run. First time I ran more than a mile since I wore the uniform. You guys do more than challenge people to be better. You give people hope after they’ve given up on themselves. Thank you. My New Years resolutions are to do a Light, Challenge, and Heavy in 2015.”

And here’s my take is that everyone who goes to war comes back a little different. In some ways better in some ways worse and both ways the world is never the same and this applies to the definition of everyone and that’s a lot of people and it includes the dudes in the most elite units in the military and it involves the other 99.9%, too. Hence everyone.

If you’re out there and still adjusting to being home, nothing could be more normal than that. Dave found GORUCK and that helped him. Tyler back in the day found shooting again after swearing it off. I found Java and Java found GORUCK. Find something because something’s out there, people are out there who care and in our corner of the universe feedback like this from Dave is what keeps us going as Cadre and as a company called GORUCK.