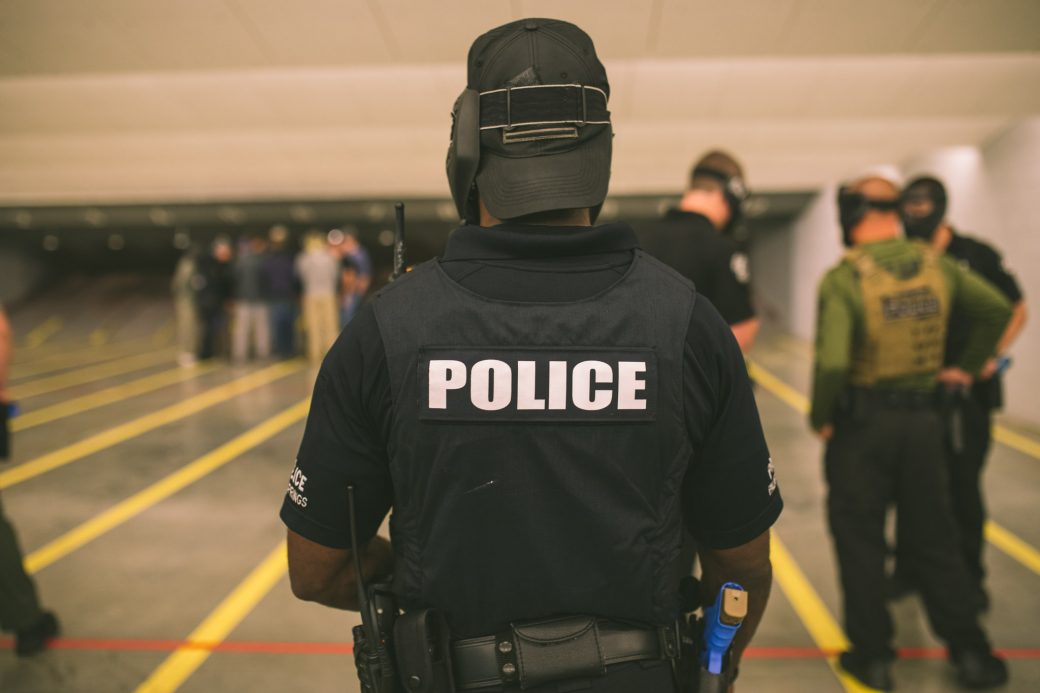 When the only thing standing between order and anarchy is a brave and well-trained police officer who is prepared for duty. Split-second decisions can change the course of human lives in an instant. Decisions made under high stress are never innate when a law enforcement officer (LEO) responds to “shots fired”. By simulating the chaos and stress experienced in real life, police can train for the worst in a forgiving environment and develop critical life-saving skills.

The GORUCK Firearms Program and Cadre offer specialized courses to address the most critical of needs for law enforcement agencies across the nation. This month, GORUCK conducted a series of courses for LEO in the Palm Beach area over a four day period: Active Shooter Intervention (ASI), Force on Force, Counter Terror Rifle (CTR) and Night Fire Rifle (NFR). I had the good fortune to participate as a role player in these courses and the healthy respect I already had for law enforcement increased ten-fold, watching these LEOs in action and witnessing how deeply they care about doing the right thing.

THE HIGHEST CALIBER INSTRUCTION OUTSIDE OF SPECIAL FORCES TRAINING

Active Shooter Intervention focuses on identifying the necessary tactics and strategies to closing with the adversary, making contact, neutralizing the threat, and taking immediate after actions necessary to control the scene.

Force on Force uses role players and simunitions (small, paintball-like ammo that can break the skin when shot from a handgun or rifle) to recreate the chaos and stress of real life. Trial by fire evaluations and learning is achieved in split second shoot/no shoot decisions. Officers experience threat identification, surgical shooting, de-escalation through dominance and the most realistic training on the market today.

GORUCK’s Counter Terror Rifle course teaches LEO’s how to best employ their patrol rifle in the most efficient manner possible in the most difficult conditions imaginable. What most people do not realize is that the standard method of carry for an officer is actually condition three. Meaning the rifle is either in a rack on the passenger seat or the trunk of his unit, it has a full magazine but NO round in the chamber. Officers must be able to select the best tool for the job and when there are moving targets, innocents in the foreground and background and surgical shooting is a requirement, the rifle is the best tool for the job. In the CTR course, officers sharpen skills and increase confidence in their ability to access, chamber, and close distance to a threat immediately, efficiently, and above all, accurately. This is the primary training objective of CTR for law enforcement.

Night Fire Rifle is a unique and rare opportunity to test gear, equipment, and skills in the most likely conditions for bad things to happen…at night. The NFR block of instruction builds confidence for LEO’s to bring the fight to the enemy to protect the public. Shooting and moving, proper use of weapon-mounted light, communications, transitions, target discrimination, and other advanced skill sets are honed to a razor’s edge in this dynamic and exciting course.

And for those of you who are wondering, yes, civilian versions of these courses are also available to the public.

“Law enforcement officers need to be absolute experts at the high liability topics of shooting, driving, first aid, and defensive tactics. These are the skill sets that LEO will have to perform without warning and on a moment’s notice to a standard beyond the general public’s reproach, “ Garret Machine, Head of GORUCK Firearms. 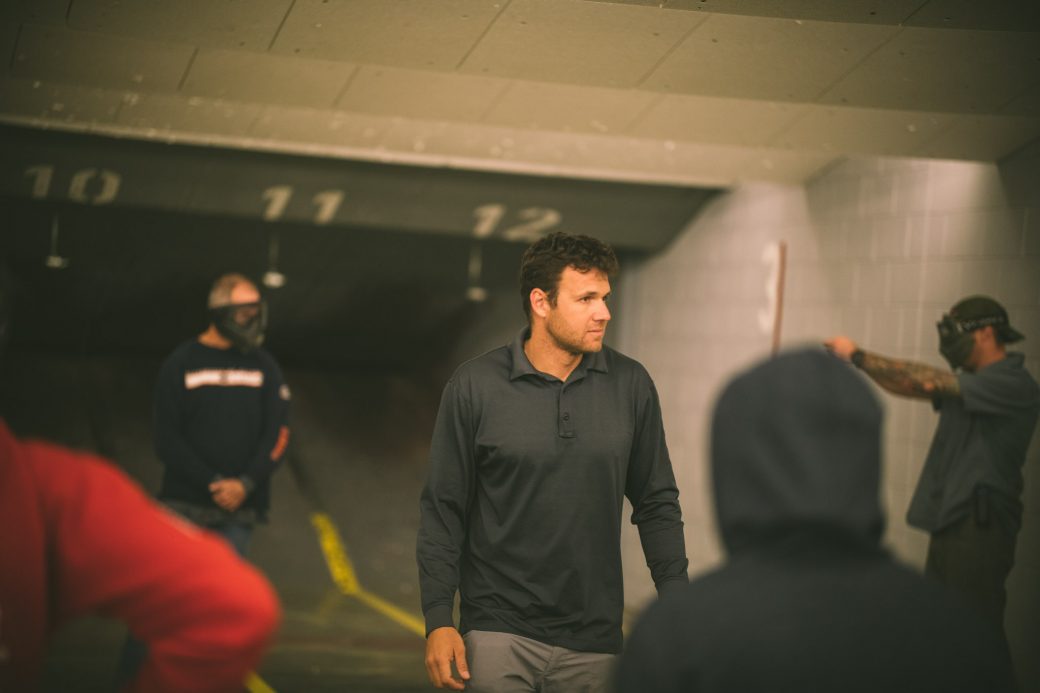 All GORUCK Firearms Cadre are current or former counter-terrorism soldiers. They come from tip of the spear Special Operations Units around the world and many have served as repeat instructors in their own agencies. Due to the vast experience and flexibility of our Cadre, no two GORUCK Firearms Training Courses are exactly alike.

As a result, these are not your ordinary courses where there is a lot of sitting and talking about what one should and should not do in theoretical table-top exercises. We start with roll call, safety brief, course overview and before you know it, you are on the range shooting and moving in a 3-dimensional space using discretionary fire, trying to not hit a “meat pole” or innocent bystander.

Next up are more real life scenarios that law enforcement officers undergo (clockwise from left) such as a mentally-ill homeless person who presents a found weapon; an armed and emotionally disturbed student in a full classroom; a stabbing attack at a crowded club on New Year’s Eve; a riot that has formed around a police vehicle; and a group of armed adversaries interspersed with innocent bystanders. Officers are encouraged by Cadre to establish authority swiftly and with confidence. 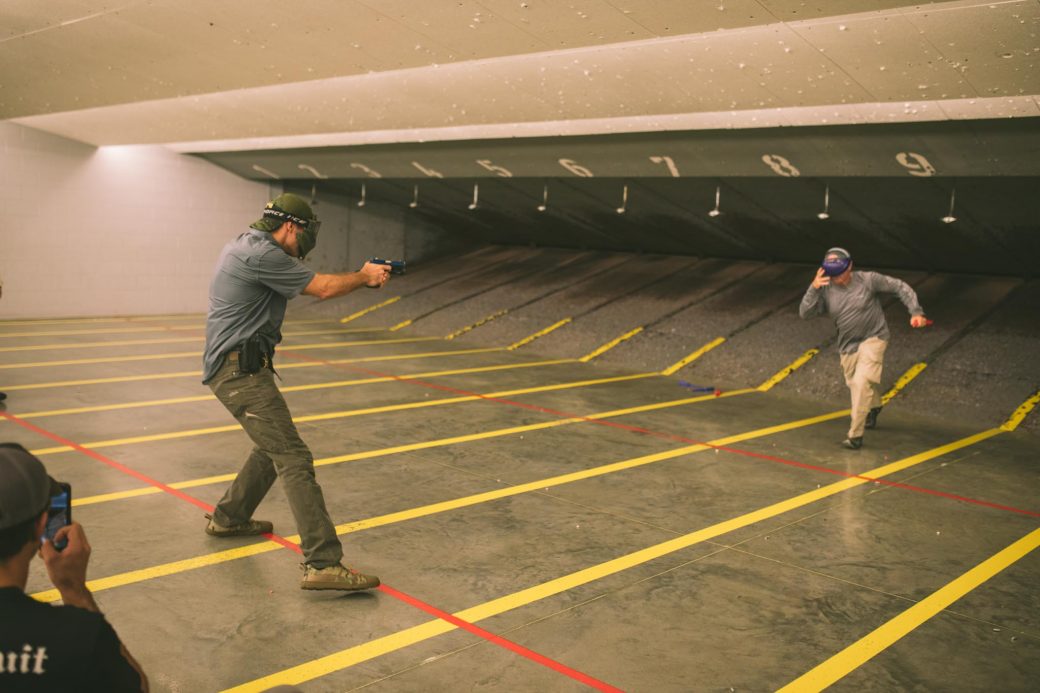 The 20 ft or Tueller Drill came up in conversation during this particular course. The Cadre had one of the more experienced officers demonstrate how quickly an adversary can close in on an armed officer who is anticipating the attack. The lesson was clear. Avoid that situation if at all possible. “De-escalation comes through establishing dominance,” said Machine, “and could prevent the need to pull the trigger.”

Each officer gets their own chance to solve the problem at hand with real-time feedback from the Firearms Cadre. “Backup arrives in minutes, I am presenting you with a problem that needs to be solved in seconds,” Machine states matter-of-factly. “As the first officer arriving on the scene, you are 100% of the manpower available and 100% of the solution to this problem.”

Officers download what they were thinking right after completing the scenario, prompted by a simple question from the Cadre: “How do you think that went?” Then officers who have already gone get a chance to watch their colleagues in action, noting how different techniques and styles fare in the situation.

At the end of the course, I observed that every officer gave the GORUCK Firearms training 5 out of 5 stars except for one officer who gave it 10/10 by adding his own stars on the required feedback form. The LEOs had unique, personalized take-aways from the courses, though all agreed on one aspect: the use of trained GORUCK role players was critical in making the scenarios look and feel realistic. These roleplayers have participated in numerous GORUCK Firearms courses and fly in from around the country to roleplay. Some are even police officers themselves, others are working moms and dads who often invite their high school sons and daughters to learn about law and order from another perspective.

All this takes me back to a day in 11th grade English Literature when a favorite teacher of Jason’s and mine once said to our class, “Police officers are the knights of the modern day. They are charged with keeping the peace that allows the rest of us to go about living our daily lives. Without them, there would be anarchy.” In retrospect, I was only beginning to understand what he meant by that statement. Now I want to support any and all training for LEOs and education for our youth to reinforce that thin blue line.

It can be easy to take for granted the sacrifices that our law enforcement officers and their families make every time they report for their shifts or when they run toward danger when off-duty. At GORUCK, we keep our LEO friends top of mind every day and especially during National Police Week. Please take the time to thank an officer in your community and dedicate this week’s LEO rucking workout to our brothers and sisters in blue. 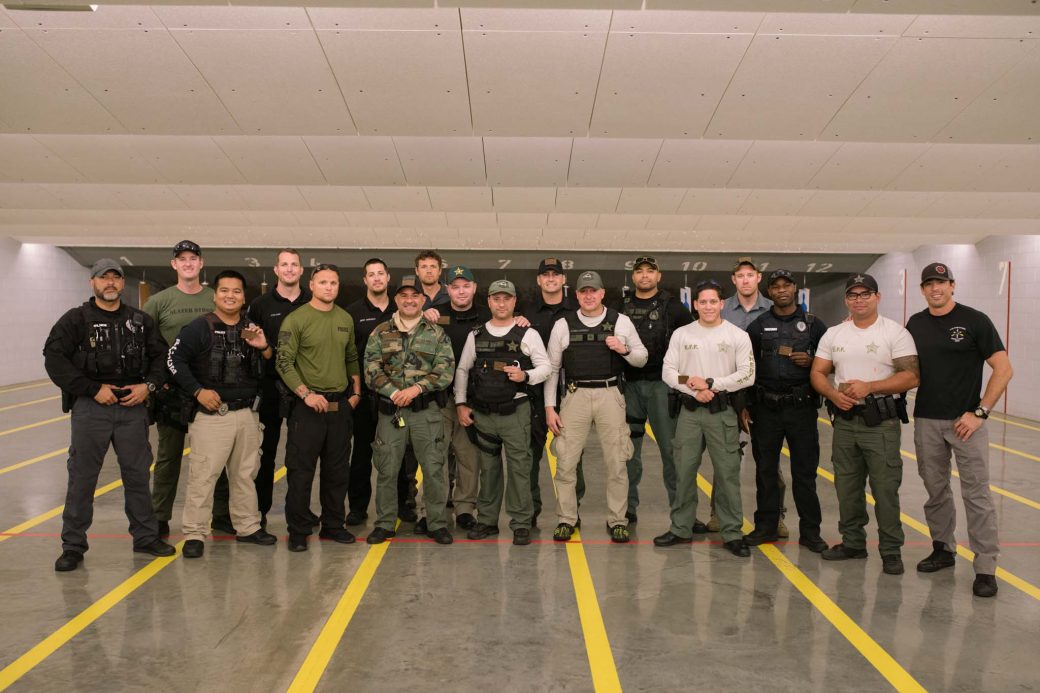