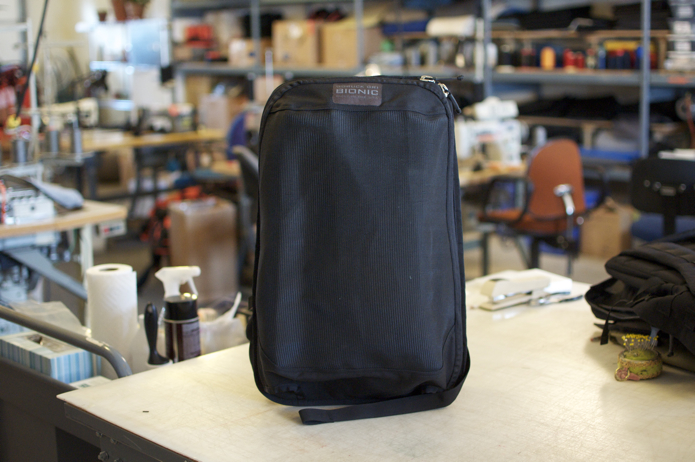 Ten years into two wars, there is more reason than ever to focus on a functional bionic limb. A team of engineers at West Point was tasked with designing and building a powered prosthetic (aka bionic) limb to allow below-the-knee amputees to run and walk more easily than they would with a conventional prosthetic. Working with Army Research Laboratories, the West Pointers contacted us to design a ruck for the bionic tester, who needs to comfortably carry a power generator and two batteries that must remain cool as they power the bionic leg. Given the scope of the bionic project, it’s an honor to be involved. GR1 Bionic is now a custom, one of a kind bag that is part of the bionic testing process. 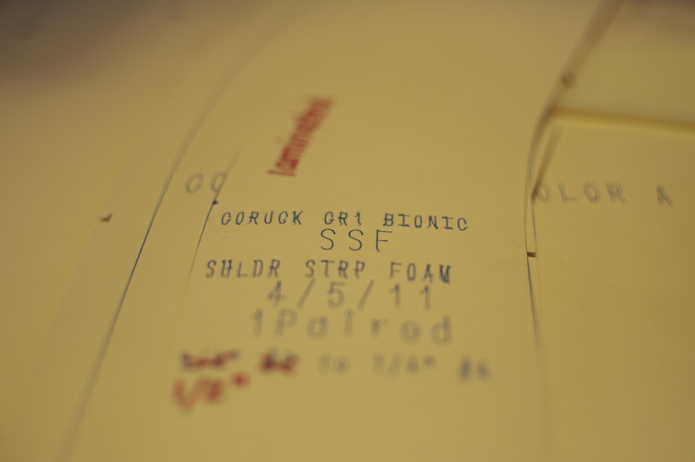 GR1 Bionic is a modification of our GR1.  The shoulder straps and the back panel, with the laptop compartment, are identical to GR1’s.  The remainder required multiple prototypes to get right given the functionality demands. 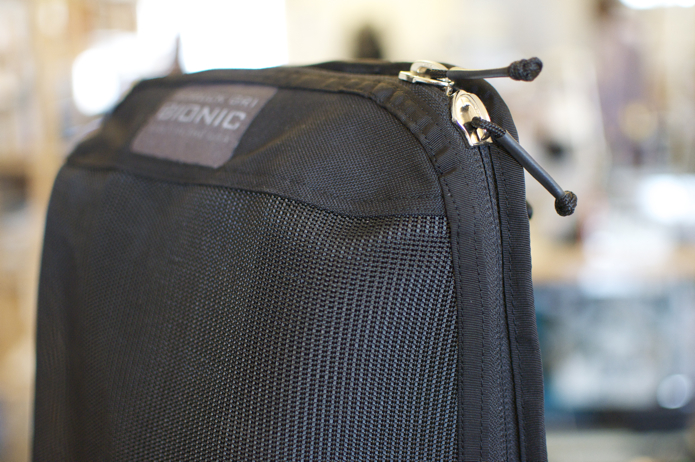 We used military-grade, non-stretch mesh to cover the exterior.  This allows for heat dispersion from the generator and the batteries. 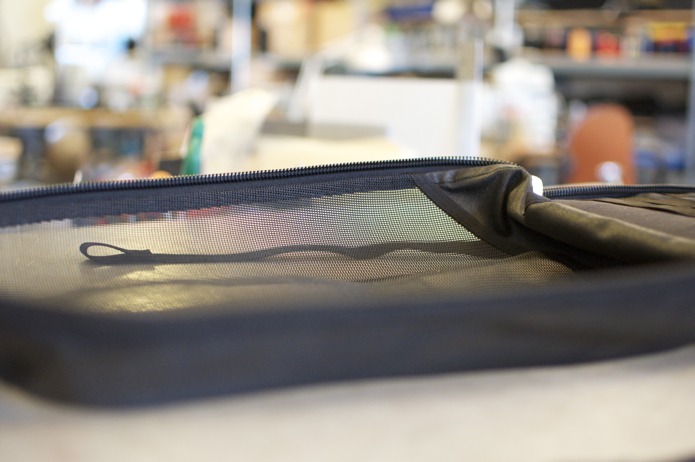 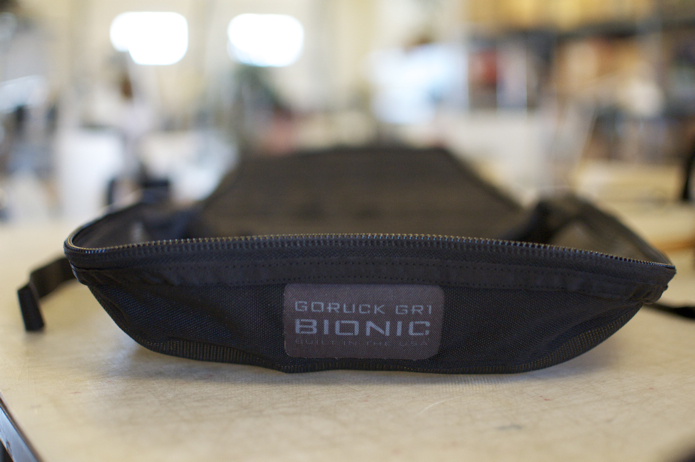 The team asked us for an external product label (to more easily keep track of the ruck’s name on an equipment list), so we centered it at the top. 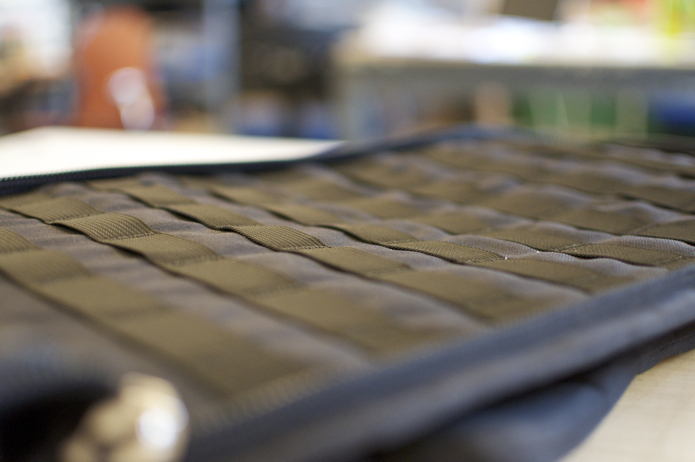 The interior is covered with MOLLE webbing, standard in the military to allow soldiers to customize the layout of their pockets on top of their body armor. Additionally, GORUCK will be rolling out several field pockets that utilize this attachment system in the coming months. 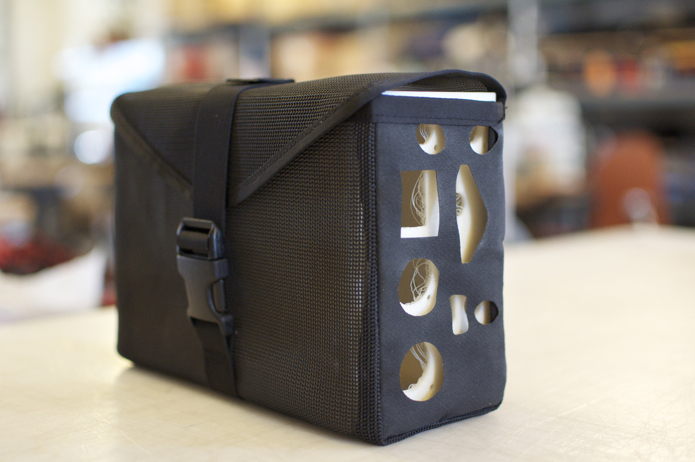 The West Pointers sent us the dimensions and a mock up of the generator, which powers the bionic leg. This custom pocket is also made of mesh which lets the heat escape and includes cut outs in the side for the wire configuration. 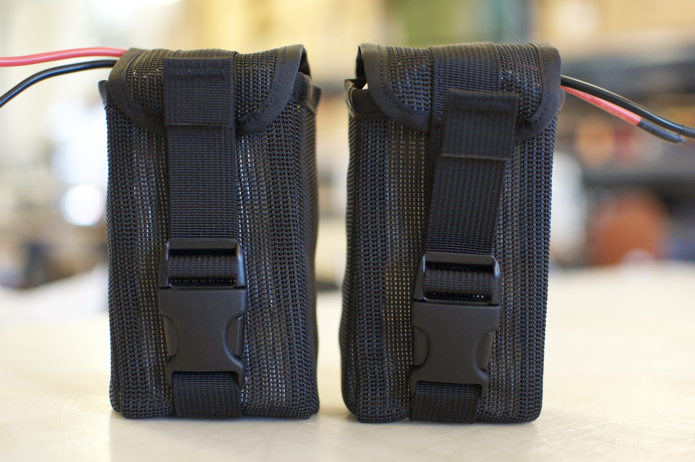 Two custom battery pockets.  Together with the generator, they all attach to the MOLLE webbing. 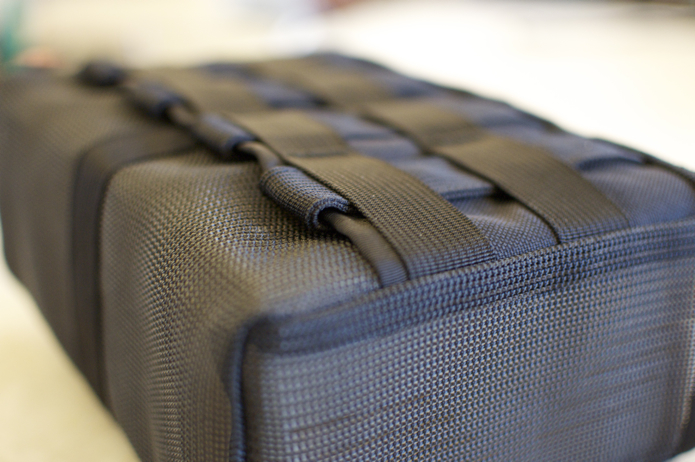 The back of the generator pocket. The reinforced webbing strips that are tucked in come out and weave into the MOLLE webbing on the interior of the GR1 Bionic. 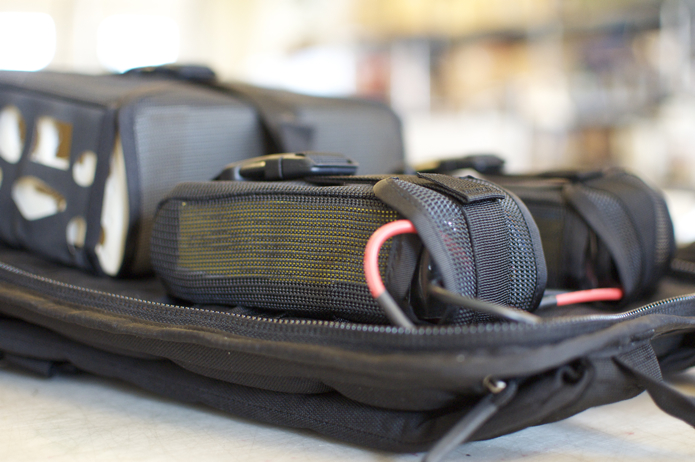 The pockets are shown secured into the ruck via the MOLLE webbing. As the ruck was designed at our factory, and not at West Point, the cables are simulated. 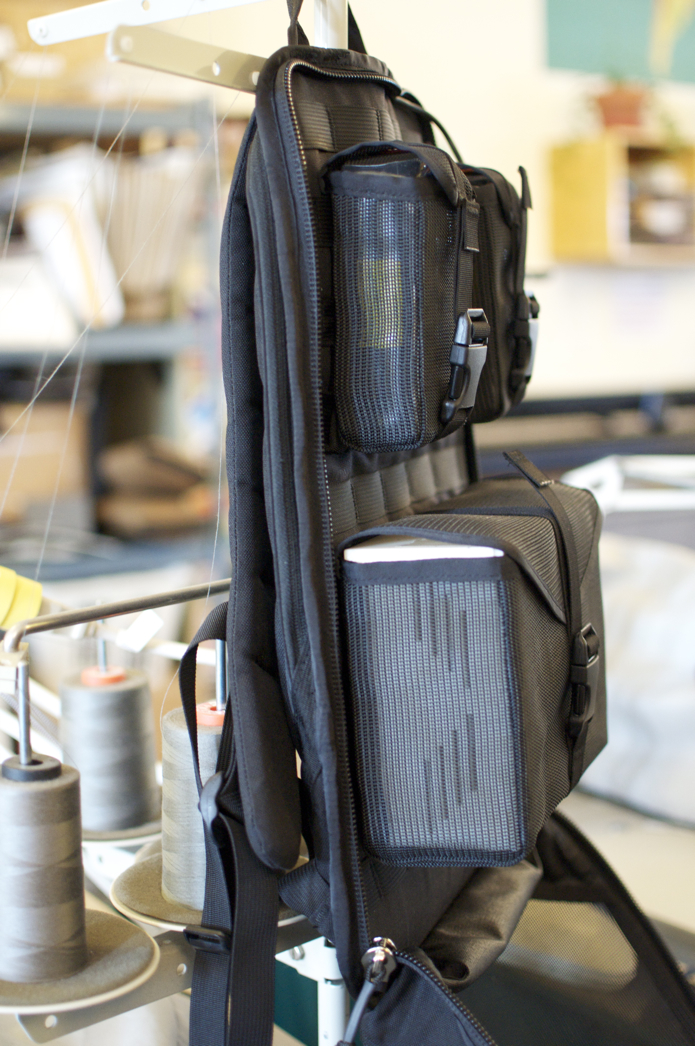 The exterior of the bag is unzipped, and the pockets are securely in place.  The MOLLE system is tried and tested and allows for maximum customization. 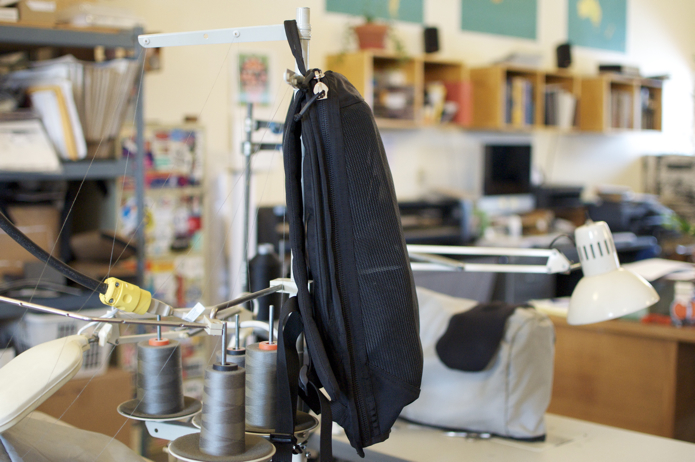 Shown in profile, completely zipped up.  The mesh exterior allows for heat dispersion but remains a protective cover. 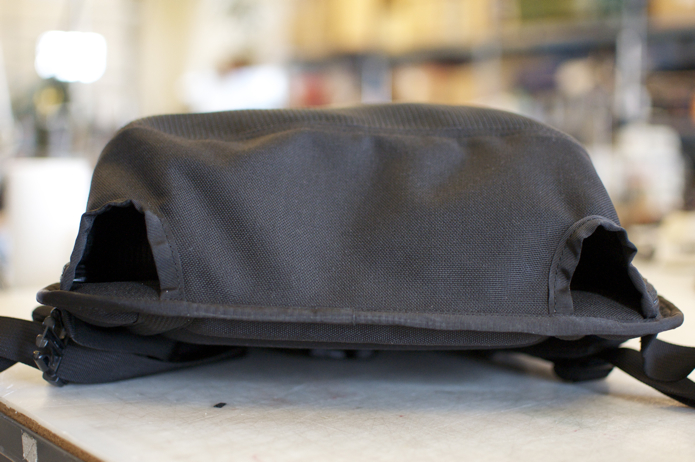 Depending on which leg the bionic is replacing, there are exit holes for the power cables at the bottom on the left and the right sides. 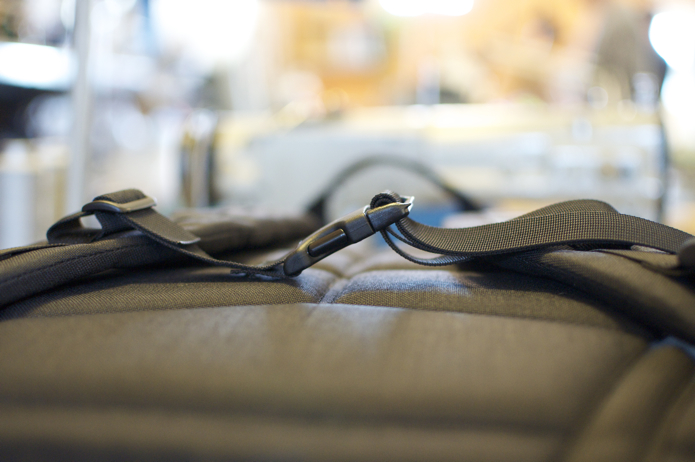 A sternum strap, adjustable and customizable via the MOLLE webbing on the shoulder straps, was requested. It allows for a slightly different distribution of the ruck’s weight and can offer additional stability for the wearer. 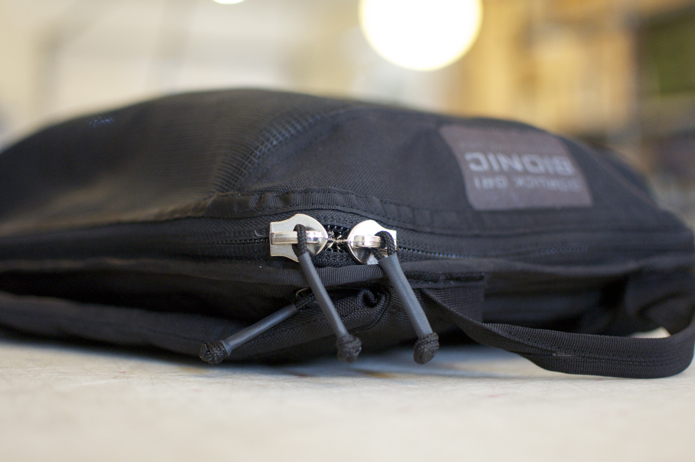 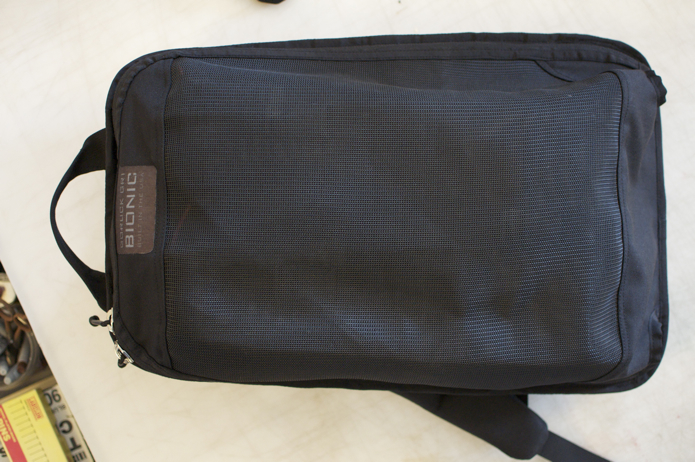 The GR1 Bionic is our favorite project thus far, no doubt because of the purpose it will serve. Functional, simple, comfortable, and customizable were the requirements and went into every aspect of the design. This is the first of three posts to cover the story. The second post will feature Lieutenant Harp, the bionic tester who lost his leg in Afghanistan and is currently at Walter Reed. The third post will focus on the actual bionic testing at West Point.