“Associate yourself with men of good quality, if you esteem your own reputation; for ‘tis better to be alone than in bad company.” — George Washington

A handful of rebels defeated the most powerful empire on Earth for the mere opportunity to forge their own future. People who just wanted to think freely, be treated as part of the country they identified with, and live their lives, which ultimately lit a match that ignited a powder keg in history.

The American story is complex, bloody, bumpy, but still going. No country is without or people are without sin. We see the ripples and growing pains of a relatively young country. The only way to overcome that is unity. Unity in understanding. Unity in vision. It doesn’t mean you have to think the same thing, or support the same people – but it does mean everyone has to be rowing the boat towards something bigger than themselves.

When you consider the start of the Nation one man comes to Mind – George Washington – Soldier, Statesman, Surveyor, and Spymaster. A man whose image has stood the test of time and whose mark on history is undeniable. From establishing the Nation’s first espionage operation to supporting Knowlton and his Rangers, paving the way for modern Special Forces, there is no shortage to the adventures Washington supported.

DMV GRT is surrounded by history. We have an obligation to embrace it. Our group of oh so social enthusiastic amateurs do just that. The DMV GRT crew isn’t about endless smoke sessions and diary entries on social media. We’re about more. During our capstone event, Washington’s Way Home, our goal is to strengthen mind, body, and spirit by learning and doing.

That’s why, on a cold and windy February morning, we assembled under the George Washington National Masonic Temple in Alexandria, Virginia. The clear sky and blisteringly cold wind seemed appropriate to remember a man who seemed to deem no challenge unworthy and thus we carried not only ourselves and our weight, but tools necessary to remember a great man and an 80lbs sandbag that was ‘The American Dream.’ The American Dream is easy to carry for hard chargers, harder for others, and seemingly out of reach for some. The purpose here is to show that everyone has an opportunity if everyone is focused on moving the Dream forward. To make it to the end, everyone has a part. The plan, as understood by the participants, was a long haul with lots of learnin and lessons on Washington’s youth, his time as a Mason, his time commanding the Virginia militia, and other exploits. 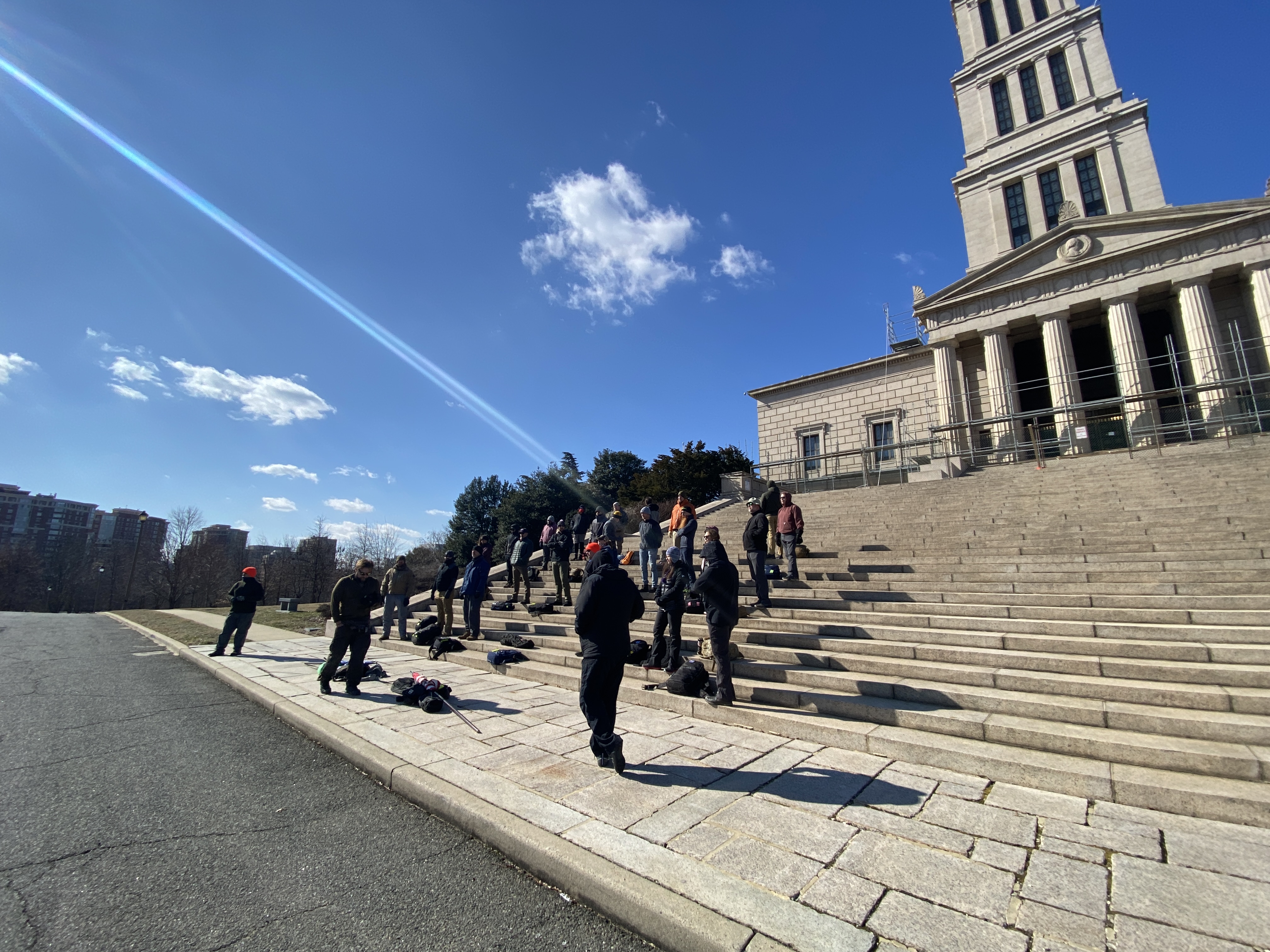 No plan survives first contact. Participants found that out early when their first challenge came before the event even started. The plan that the participants understood was simple. A movement from the Temple to George Washington’s home at Mount Vernon, roughly 13 miles away. A one way trip meant the group of individuals needed to unify before showing up to make sure they could get from their cars to the start point, and from the end point back to their cars.

Once we had everyone set up and checked in we set the ground rules. The US Flag we carried had been flown over New York City, Shanksville, DC, Kuwait, Afghanistan, traveled across the US, and would lead us on the path followed closely by George Washington’s Standard as flown in Valley Forge. 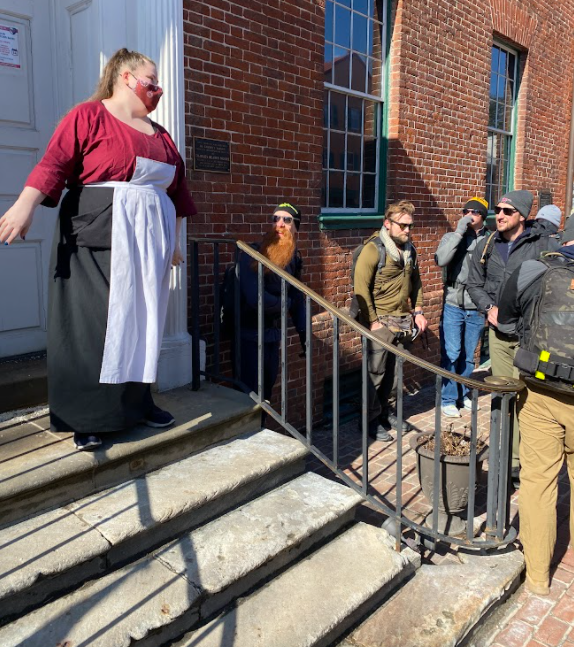 The group was presented with a choice. Accept a message from a stranger. Join in something bigger than themselves. Decrypt a message passed off by an unassuming maiden at the local watering hole or continue on, uninterested in the affairs of rebels and spies. 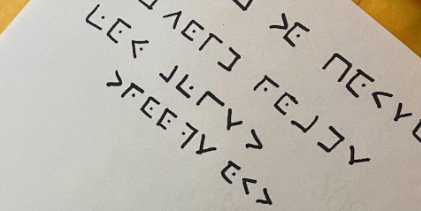 “We must consult our means rather than our wishes.” — George Washington

When you’re given a bag of gear it’s best to understand what you’ve got and think through how you might use it. It’s easy to wish for an easy day, it’s better to have the means to solve problems. George Washington was the Nation’s first spymaster. He directed the establishment of, and participated in, a spy ring which provided information and intelligence directly supporting the Revolutionary War. Now, this ruck had shifted from a stroll to a mission and the crew had the tools to solve the problems. 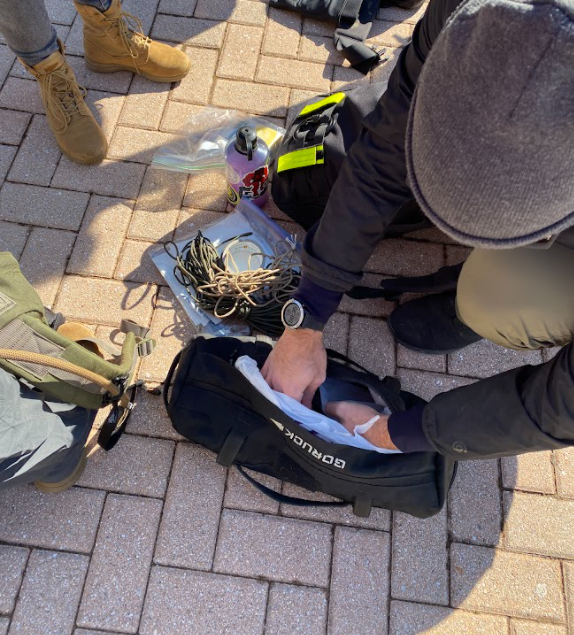 Using both tools and their wit these weirdos found the first of many hidden messages and learned about how the Culper Spy Ring were able to hide in plain sight while operating throughout the Revolution. They worked through the manual process of decrypting and understanding the task and started moving out, under surveillance. 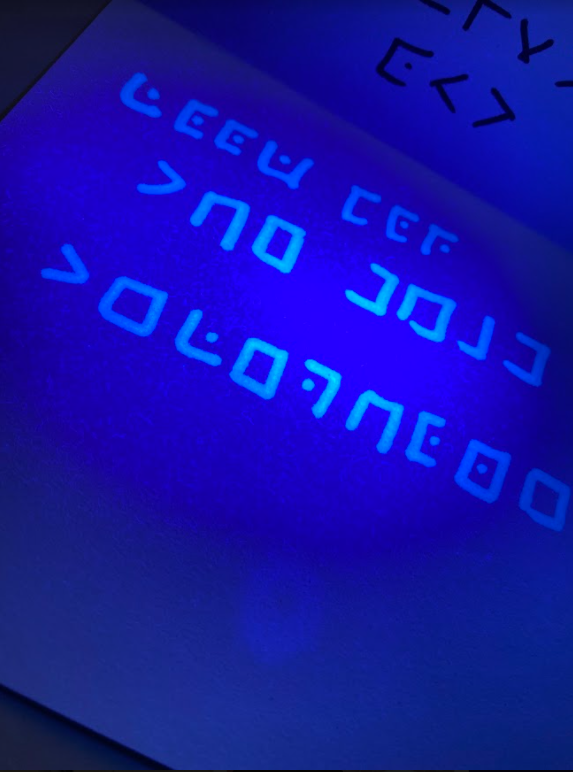 Once they got out of the city area, to someone more conducive to having a large group of nerds hanging out they needed to learn the basics of surveying. Washington was an astute student in math, leading to a love of surveying. With their mission still underway it was important to understand how to navigate and keep on track while moving across the woods and terrain of historic Virginia. First came using lensatic compasses to determine and heading and shoot an azimuth. Doing complex things really comes down to doing simple things right. 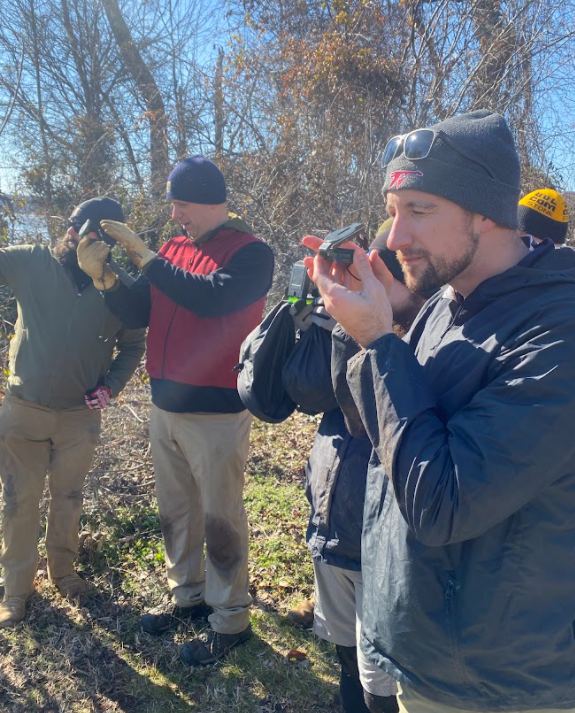 With these new skills it was all too easy to make their way across arduous terrain and over grueling features. Something Washington would have done in the early days of the Commonwealth of Virginia.

It might have just been rolling over a wall of rucks, but it felt like the real deal …probably.

After that lesson there were still a lot of miles to go before they lost the sun and the temperature dropped again. From here out it was all wilderness and backcountry. Not the place you want to be without shelter or support. 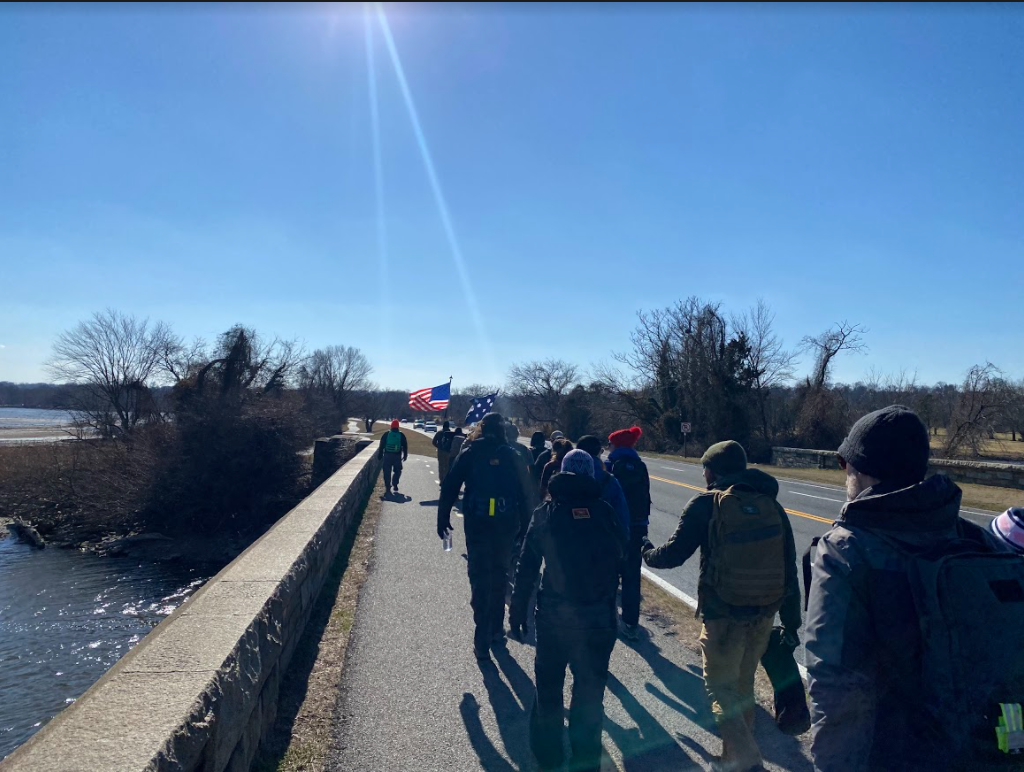 Along the way they learned about dead drops, secret inks, and how Washington directed various operations ranging from espionage through irregular warfare activities with Knowlton’s Rangers. Each piece of the puzzle built on prior pieces to provide the clues and tips necessary. In any normal endurance event you can turn off your brain and just work through the physical parts. That’s not the case in real life, and it was not the case here. Missing a clue, missing a dead drop, missing a hidden message meant mission failure. No one rises to the occasion under stress, but everyone falls back on their training. With only minor training this group found their clues, and continued to execute their mission, destroying evidence and protecting the home team along the way.

“There is nothing so likely to produce peace as to be well prepared to meet the enemy.” — George Washington

If the enemy is a physical or mental challenge, the easiest way to produce peace is to be well prepared to overcome those challenges. This is why we train, and read, and learn, and remember, and grow. After moving most of the distance. Under a quickly setting sun the team came up to their last major challenge. A lesson about Knowlton’s Rangers and the challenges faced at the time of the revolution. The last challenge was simple. The team had to get this piece of driftwood off the ground. Every. Single. Person. Needed to be part of the solution. It wasn’t good enough to watch the brutes lift a coupon, the lesson was that it’s easy to watch other people do hard work, and plenty of people will coast if given an opportunity. 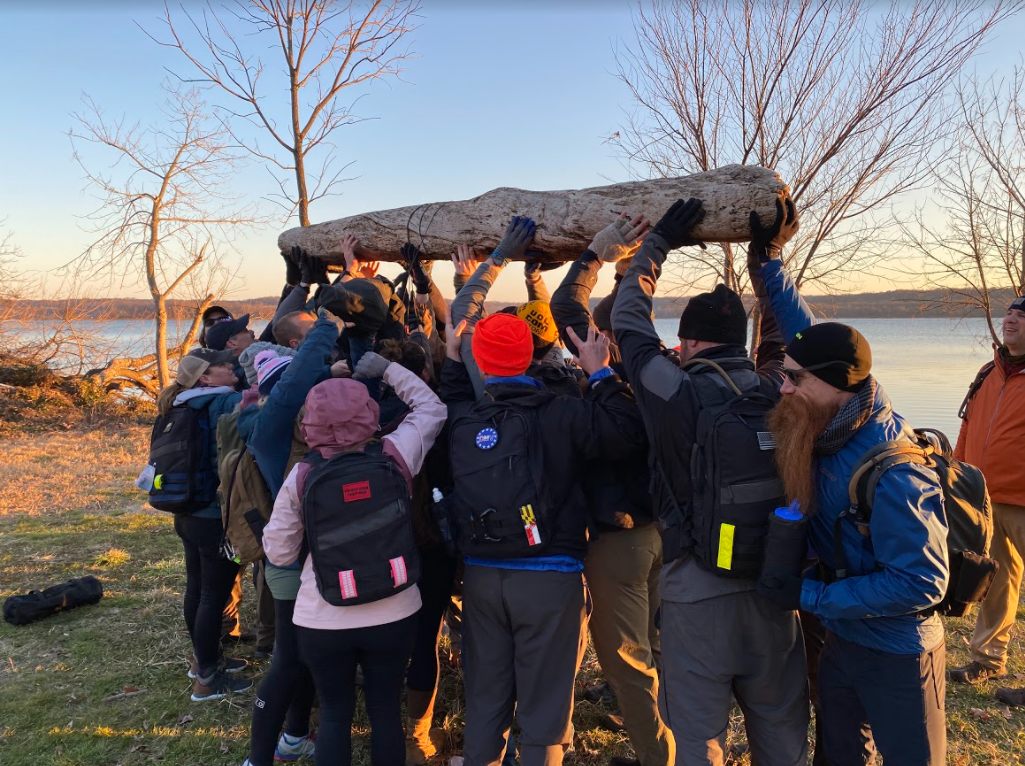 Hidden messages, timeless lessons, dead drops, and calls to action. One simple ruck became a series of history lessons, social collaboration, strategy, problem solving, and teamwork. Not everything is always as it appears and some friendships run deeper than the internet.

When everything is said and done we’re simply a ruck club whose focus is allowing people to get out and do things together. The social media rat race isn’t important, people are. It doesn’t matter what your favorite brand of backpack is, or what shoes you wear, because humans are more important than hardware. It doesn’t matter how far you go, or how many pounds you carry. What matters is how you use the strength and skills you have to motivate people to go further, not just settle for the bare minimum. 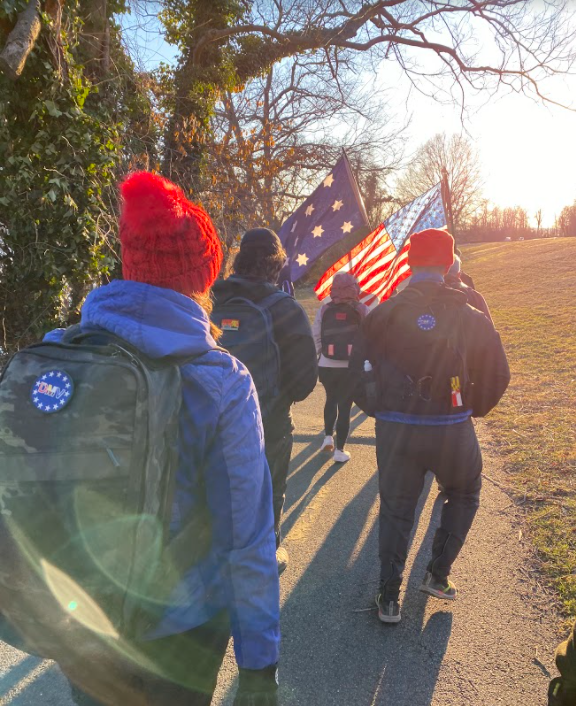 “Be courteous to all, but intimate with few, and let those few be well tried before you give them your confidence. True friendship is a plant of slow growth, and must undergo and withstand the shocks of adversity before it is entitled to appellation.” – George Washington