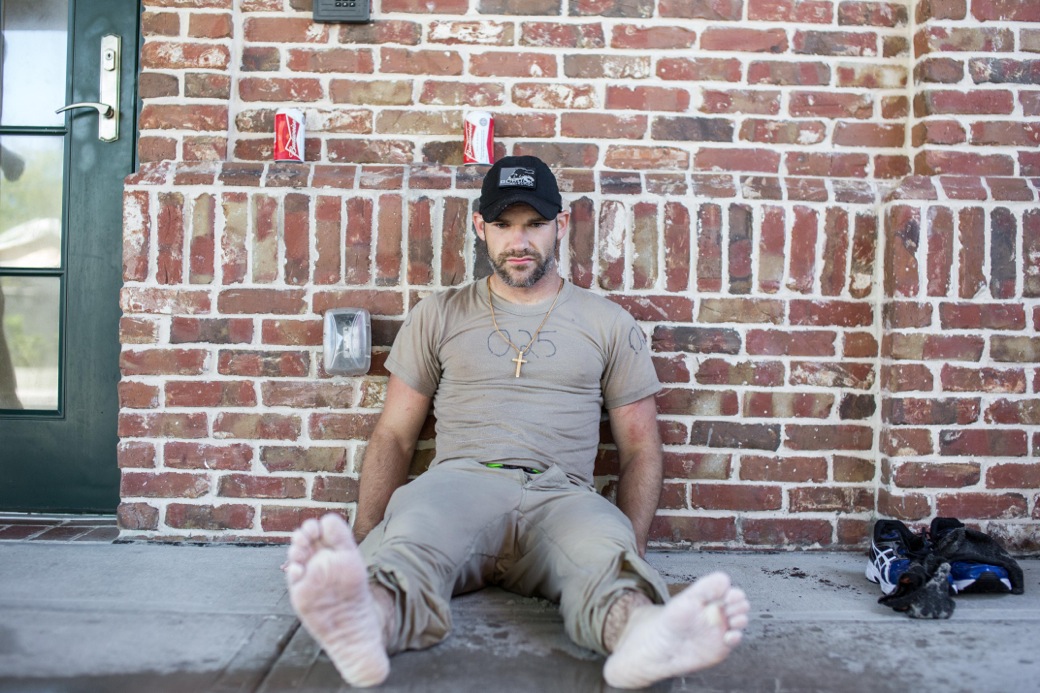 I’ve felt how Jon looks and so have you. A loss of something, a gain of something else. Something more. You can’t quite comprehend what just happened and nobody can deal with it but you. 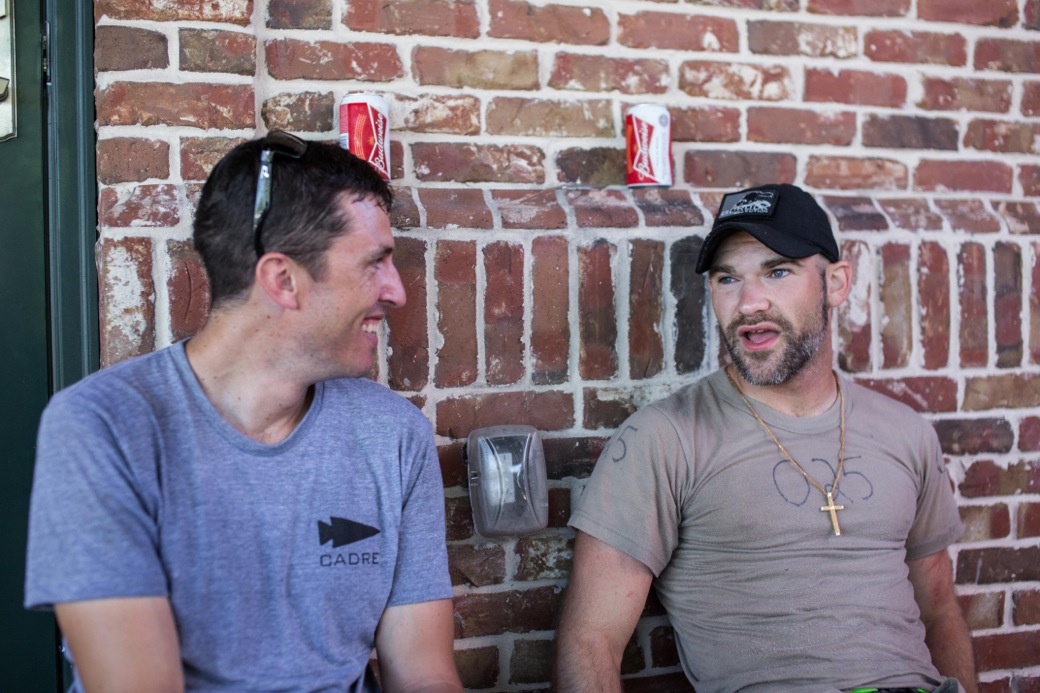 For another time, though. I’ll happily spoil your moment and replace it with our moment where you talk about your feelings and we all share in your triumph.

We Cadre got to spend some let’s call it quality time with Jon these last two days and we were proud of him. And the more of you’s we meet the more we all believe that people are capable of infinitely more than they ever thought possible. 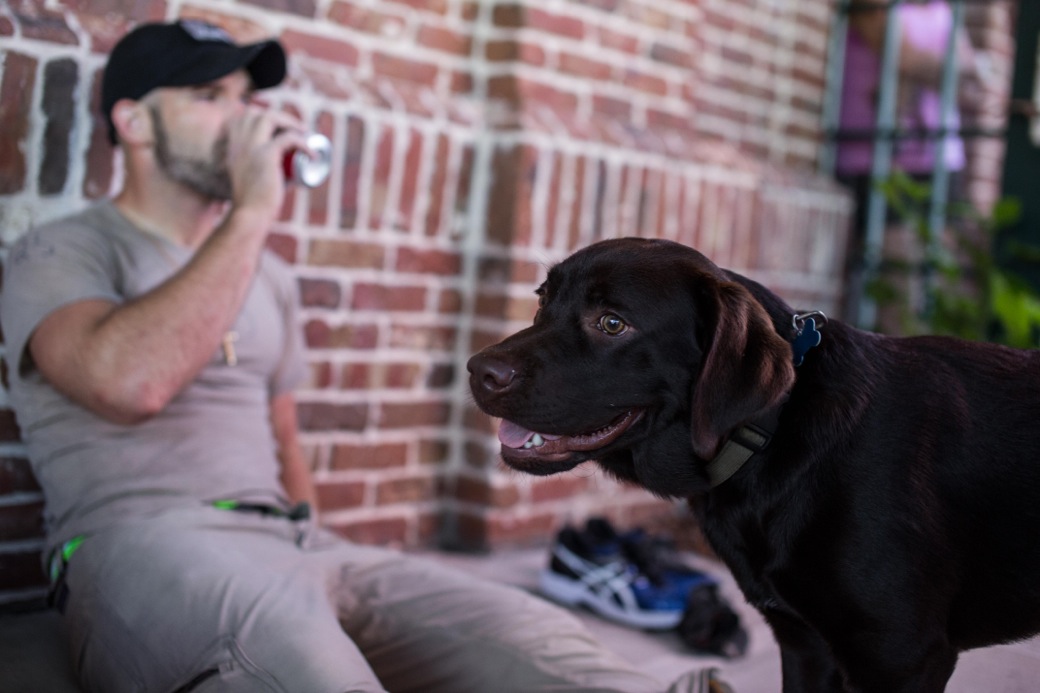 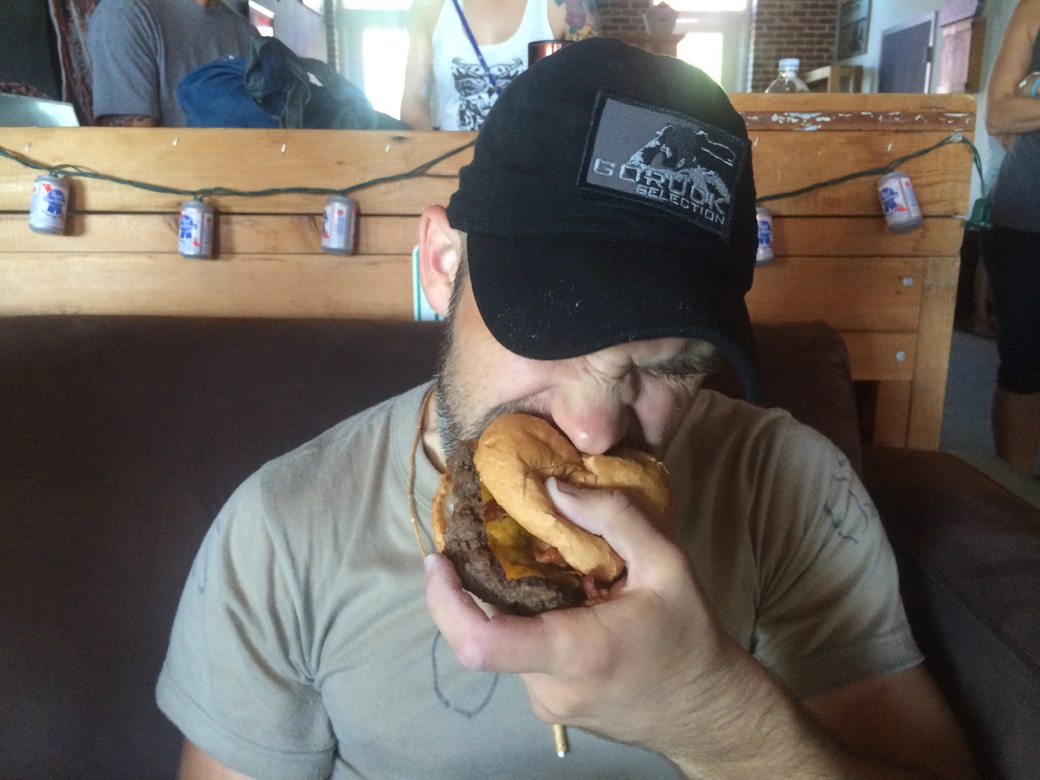 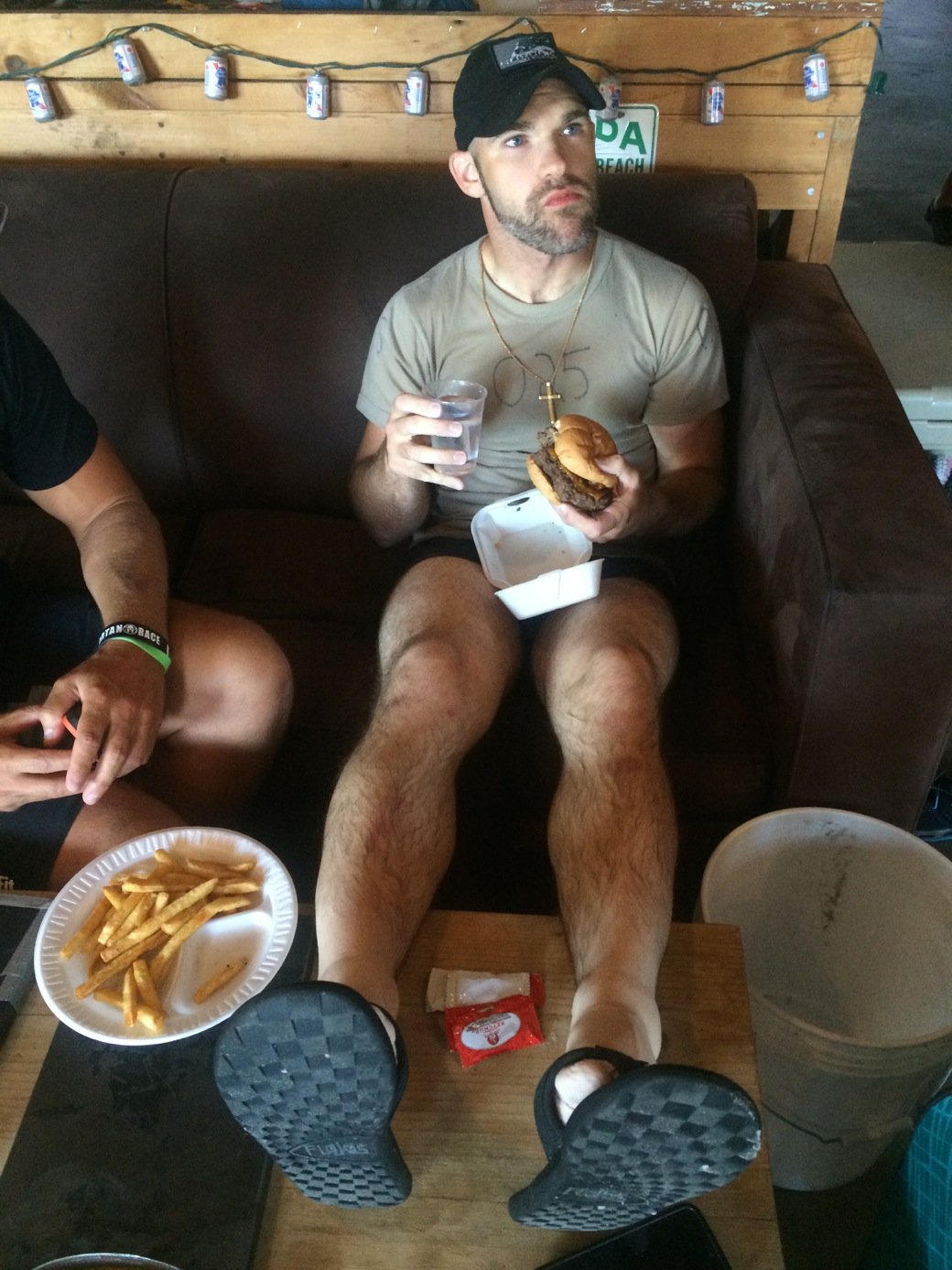 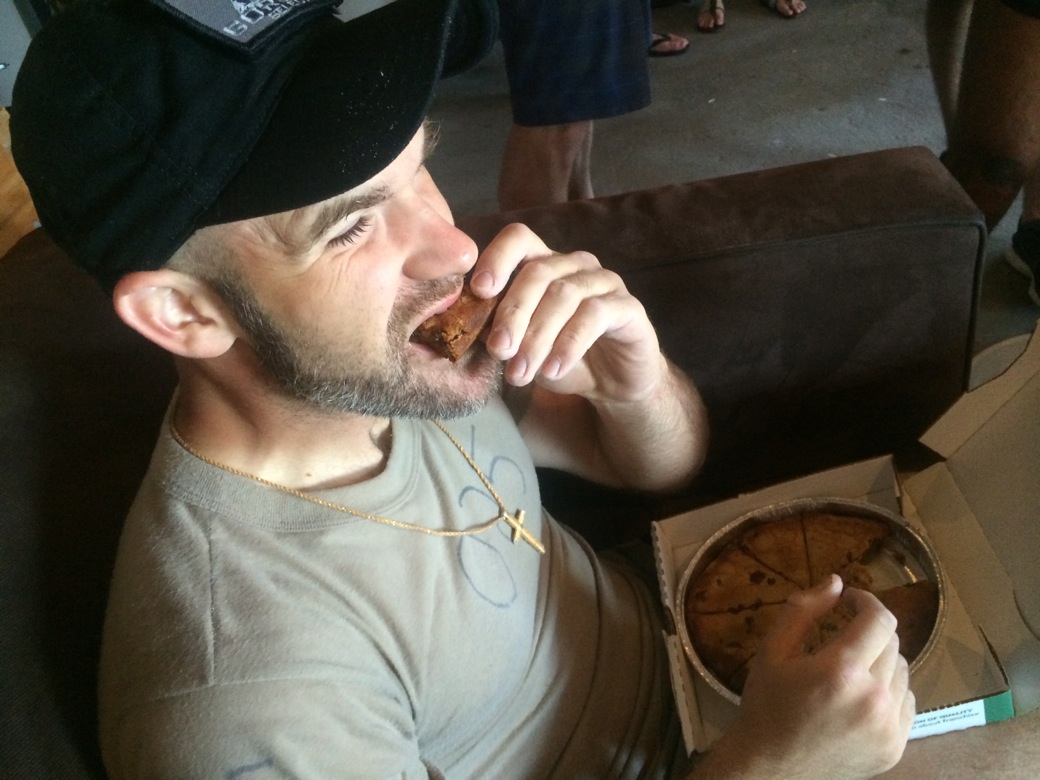 Papa John’s this is the best ad you’ve ever done. 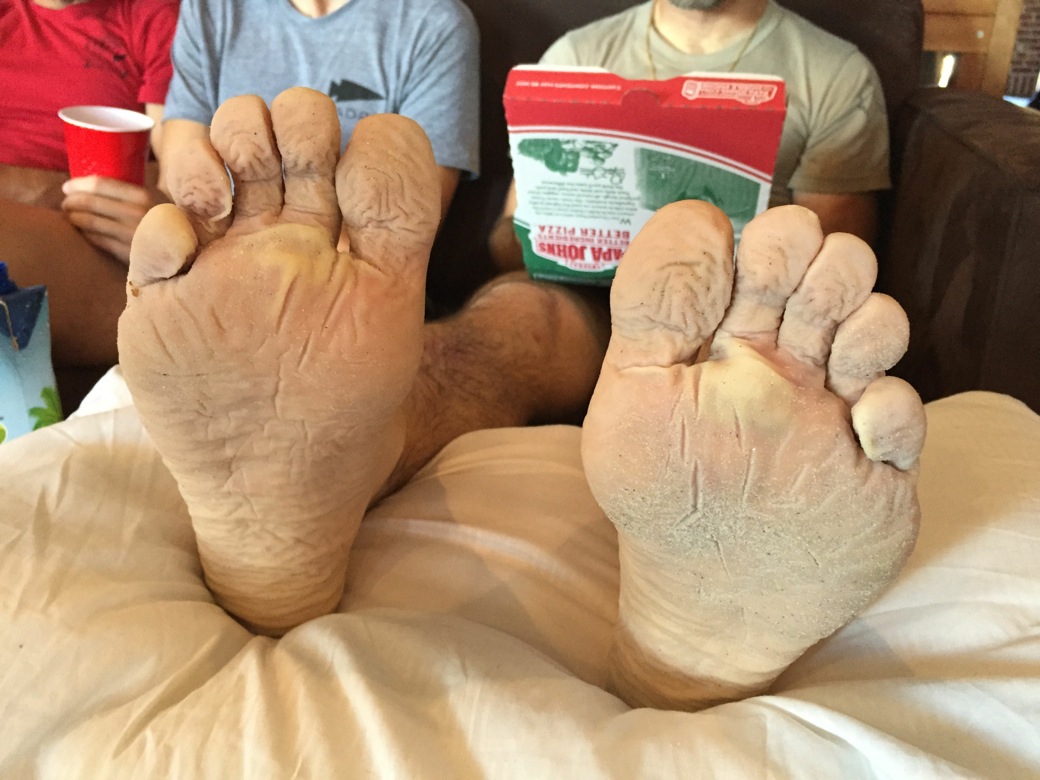 All in all those feet look really good. 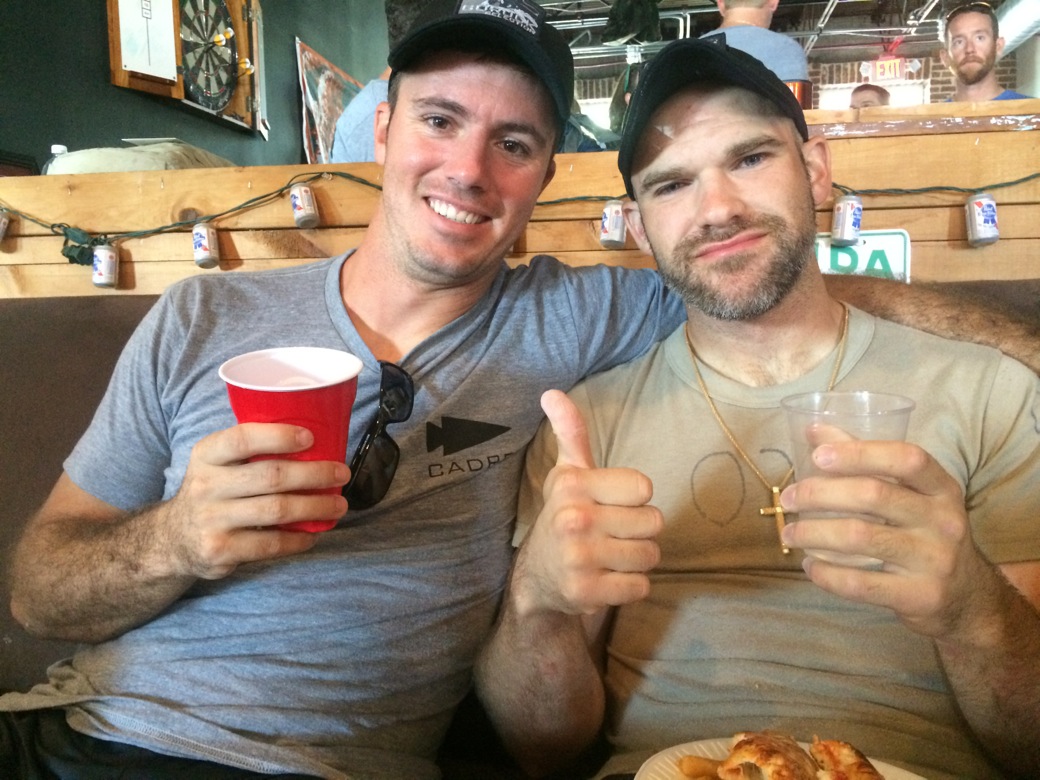 Enter an assembly line of folks next to the guy with the thumbs up and the mouth full of food. And on we raged. 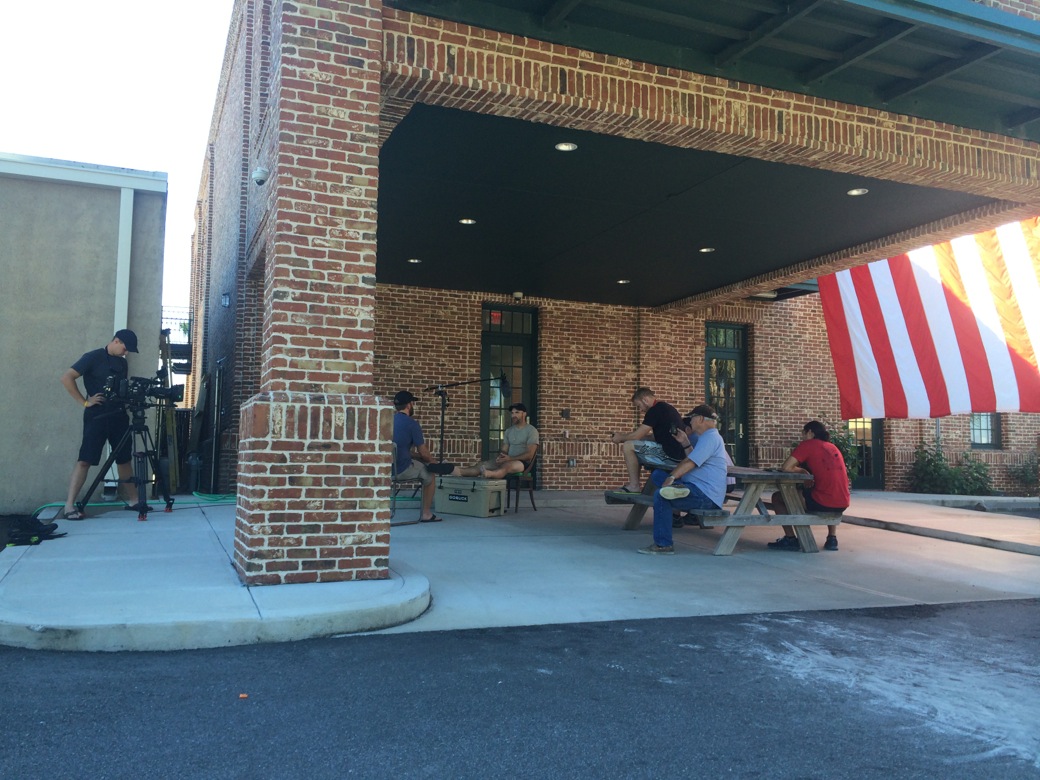 Jon doing his I’m headed to Disneyland for Outside TV after eating ~12,000 calories and drinking one beer and ~2 gallons of water. 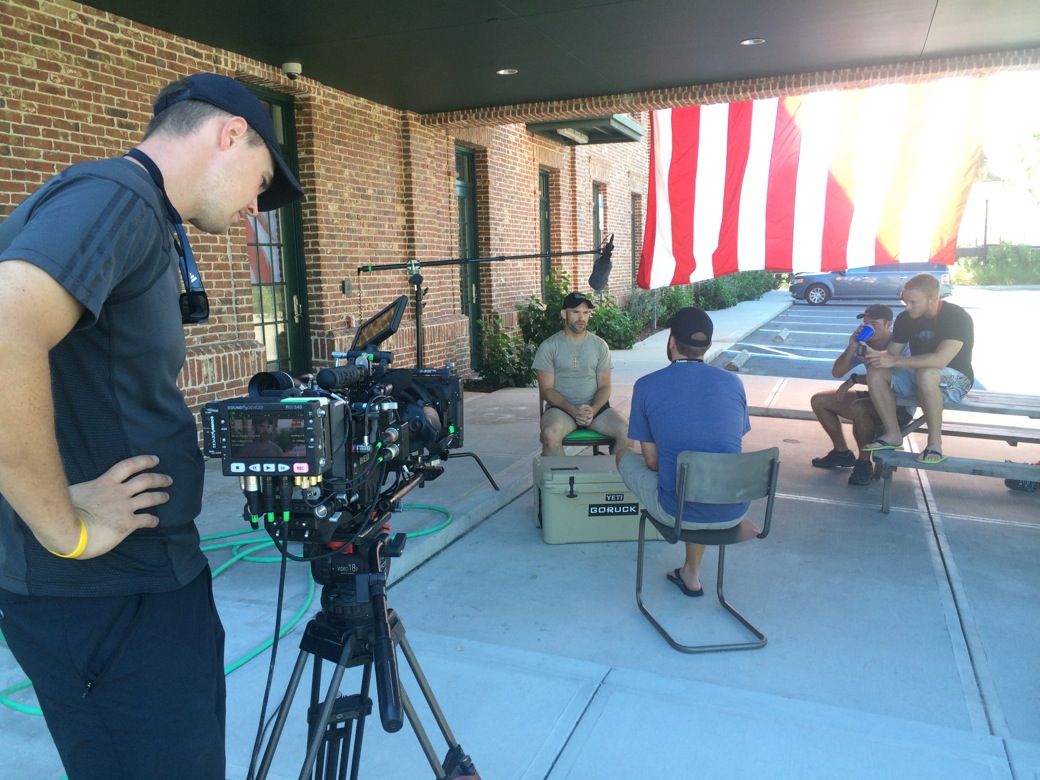 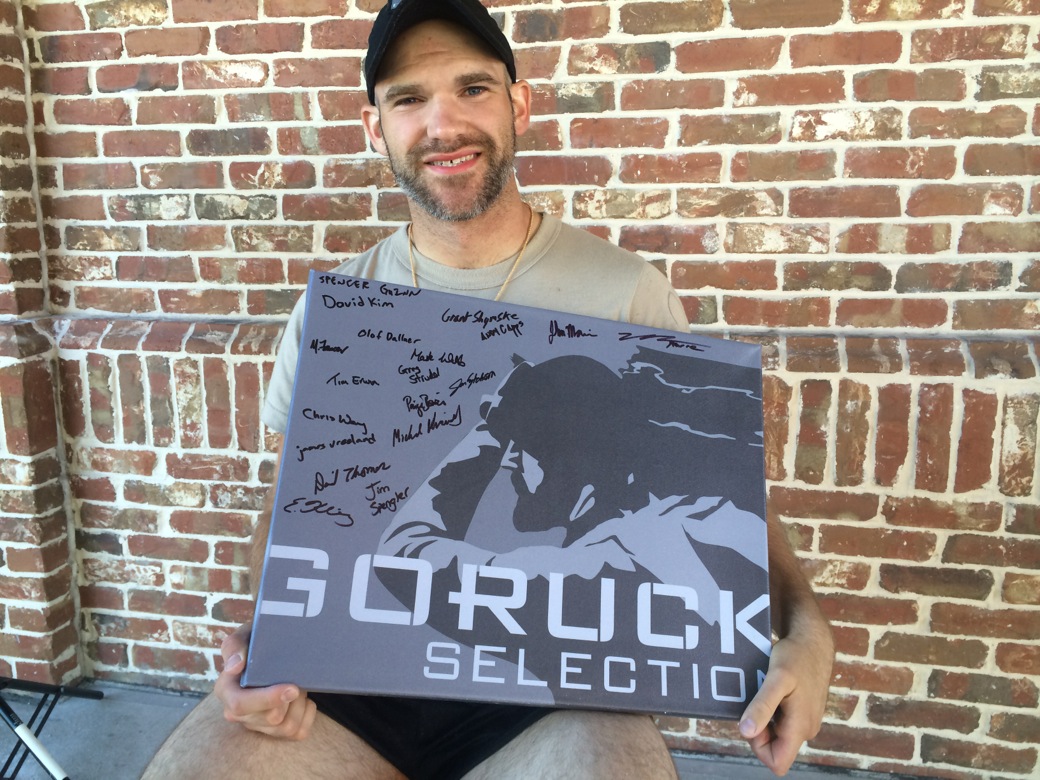 Geoff and Bert and who was that guy with the hose?

Back to the after parties in the after party. If you ever do an event in Jacksonville that pretty much means Jax Beach home to our HQ and we don’t actually own a red carpet but you will feel like royalty, GORUCK style anyway. Cold beers and loud music and great people.

I literally lived in the GORUCK Truck with these two dudes for 2+ days. It smelled not good and ya know what who cares you get over it. If you’re worried about comfort you’ll miss everything in life you can’t have it both ways. Sometimes being in the moment means literally living in the moment. In a truck. With two dudes. 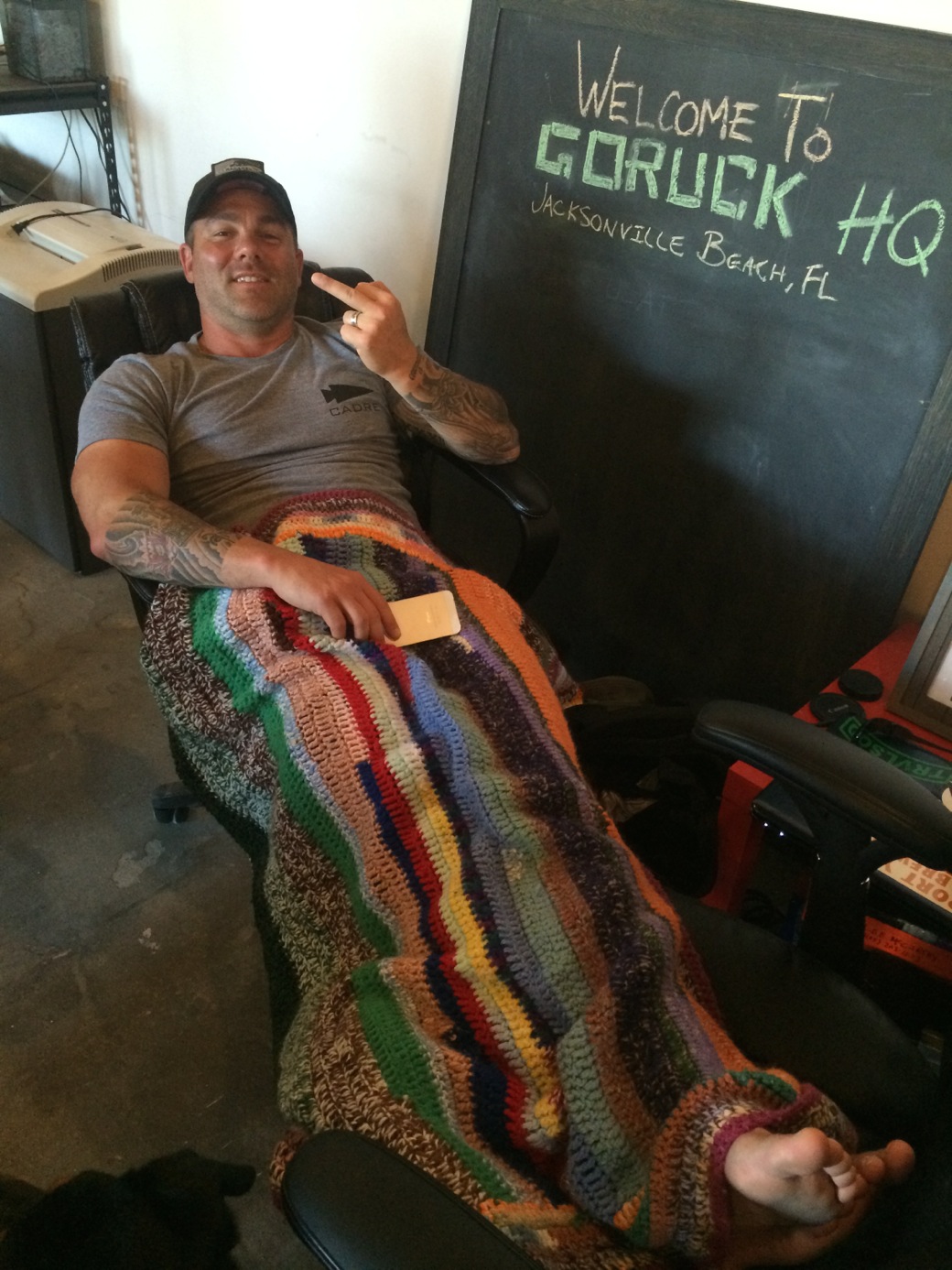 I’ll give you a million dollars if you can get that phone out of Bert’s hand and survive the 30 seconds that follow. He’s an animal and the iPhone his only true master. 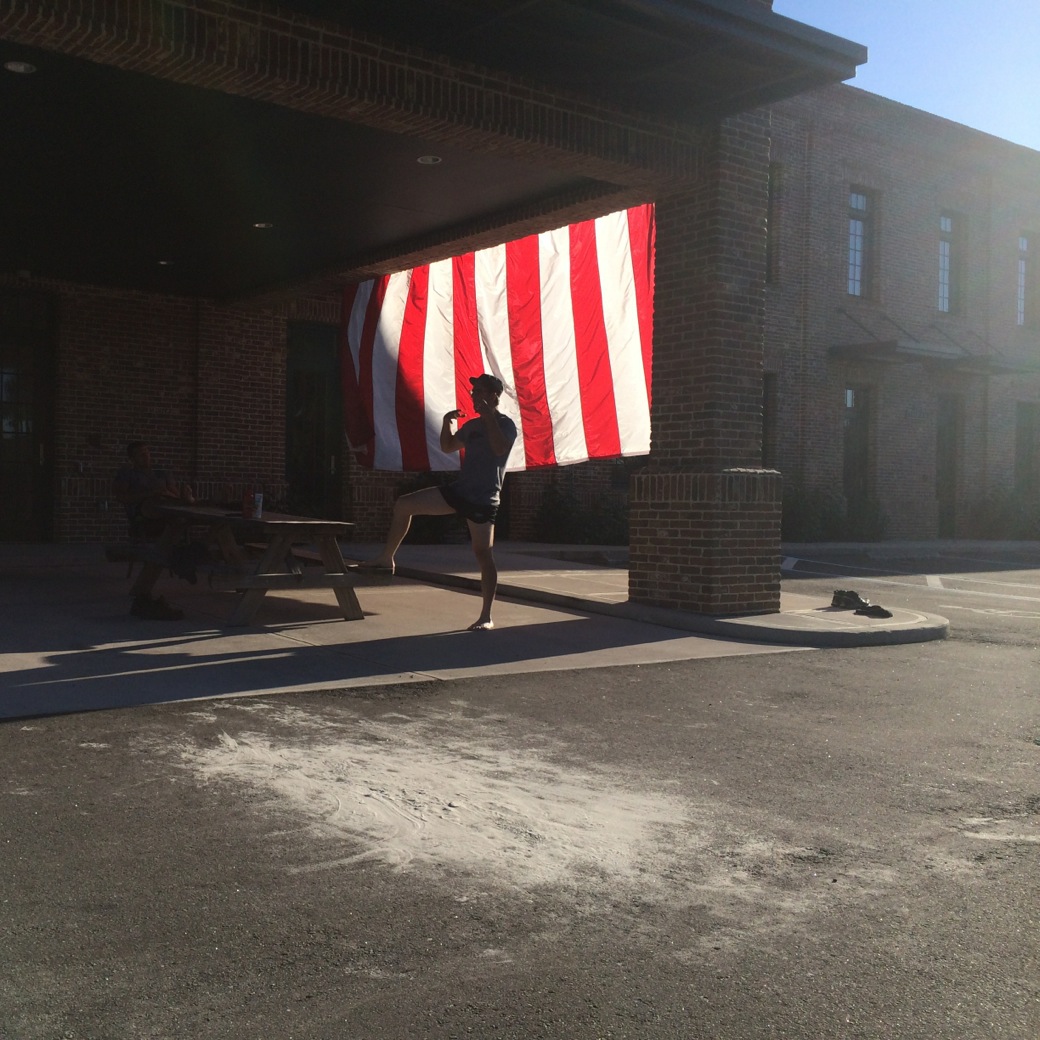 The sand dried fast and it’s gone now and yeah I guess this event is worth talking about so let’s talk about it. I would have no problem if we never ever did this event again. Come what may or come what not.

But. If we killed it we wouldn’t meet the Jon’s of the world and dare I say Jon wouldn’t know Jon quite the same way. Nor would the others who didn’t finish. But is it worth it? It is worth the destruction?

I don’t know. 2015 will be a telling year. I would not be surprised if this was the last year of GORUCK Selection. Or maybe it’ll exist forever. 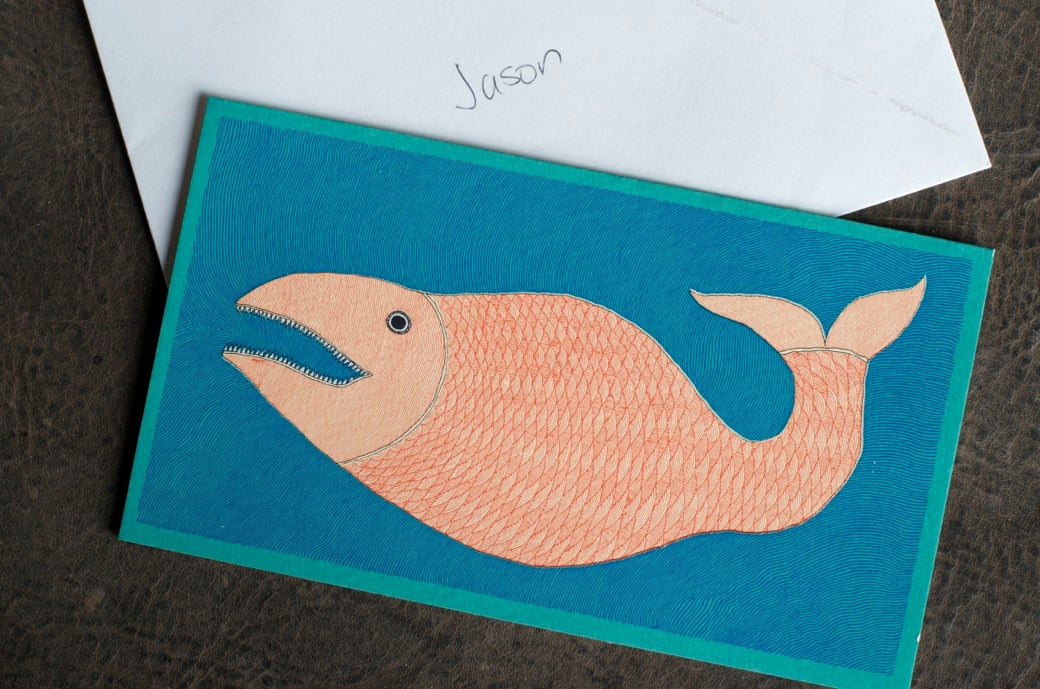 Then someone on their way out – you know who you are – leaves a beautiful letter on my desk. About life and loss and obstacles and challenges and wartorn lands far away. Wartorn lands they’ve been in but not for fighting and they wanted to know what the Green Berets went through to get that job and GORUCK Selection was a slice of that knowledge.

They closed with a simple thanks for the opportunity, and thank you to the Cadre for their service.

I’ll delve a little deeper. Selection makes me feel like I’ve got a tattoo on my face, on GORUCK’s face, and that’s what you and many see first. Judge us or whatever of course you judge a tattoo on anyone’s face. Do people gawk before they run away? Probably. Is that good for us? It’s debatable.

I wonder if this super duper extreme impossible-ish event overshadows everything else we’re doing. I wonder if destruction trumps creation by virtue of sensation. Sure it’s good for awareness but so are lots of things with unintended consequences and there is such thing as bad publicity unless you’re the kind of person who thinks all publicity is good publicity in a race to life’s gutters.

We believe in Building Better Americans. We don’t believe in beating them down and this is not a GORUCK Event. Maybe we need to bolster the others more, maybe we need to grow enough that this becomes a tattoo on our arm we’re proud of.

Or maybe we need to remove it soon, forever. 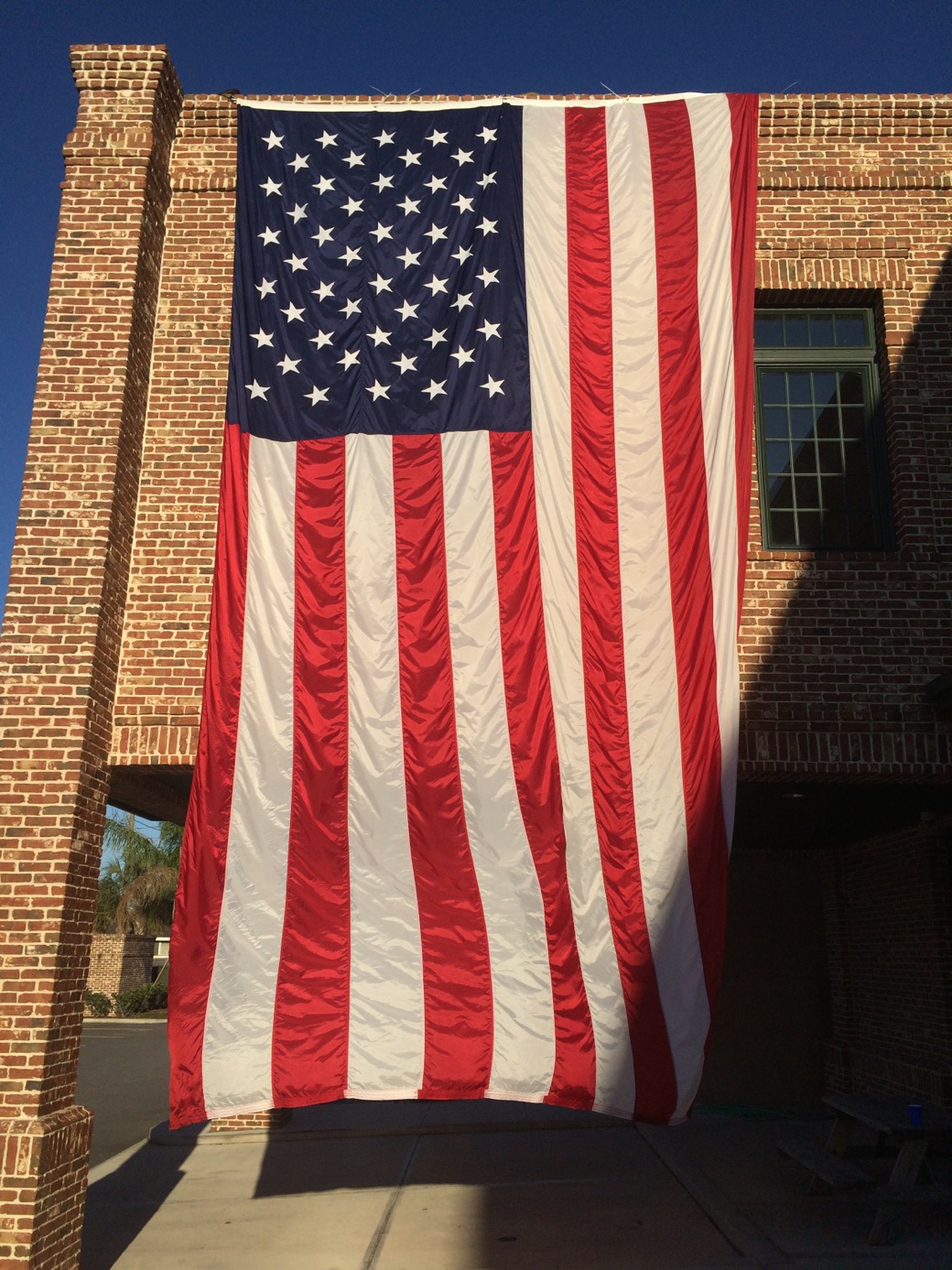 All this hemming and hawing and existentialism about one event doesn’t become us and it stops here. Here are the facts: There are two on the books in 2015, we’ll cover those stories less than we did this one, and if you wanna pass GORUCK Selection, the hardest endurance event in the world, come and get it.