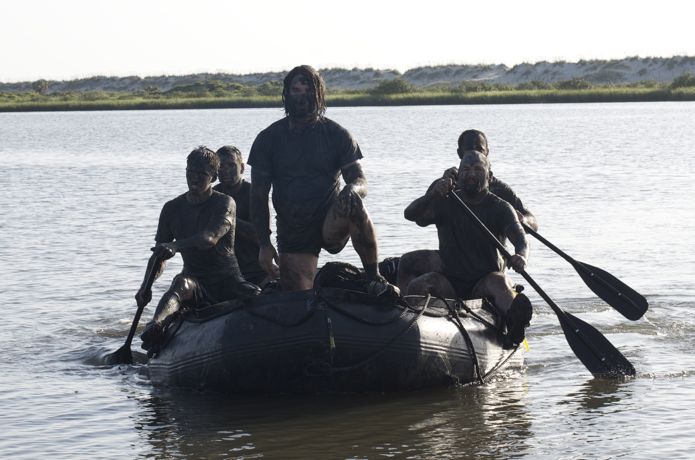 Part team, part you, all the time. Selection is an individual event but never really. The full name of Selection in the Q-Course is Special Forces Assessment and Selection. The Cadre there assess your ability to play well with others. And your classmates make sure you don’t slip through the cracks when the Cadre aren’t looking. Nobody will do the miles for you, but at times other people will carry all the weight — a slippery slope. The balance you have to figure out is how much to put out, and when. Keep a good attitude and hope it’s enough. And if you’re Webb and your pony tail is gone, at least you can look cool posing as Washington Crossing the Delaware. Rule #1 (Always look cool) in effect. And well done, Webb, unless you skipped a turn paddling to pose. 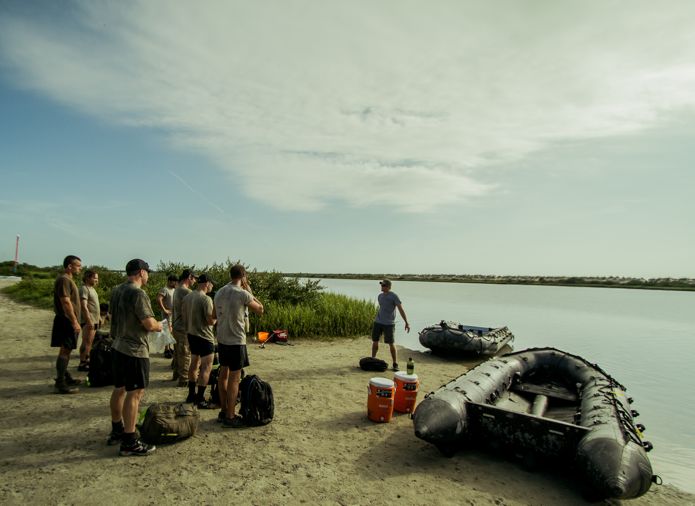 Young rattlesnakes have the tendency to shoot all their venom at the first threat they see, but at this point our first threat was 30 hours ago. Mature rattlesnakes know how to maintain their power for the long haul. Back to playing well with others: in Selection you better save some venom. And save it so you can save someone next to you. Because 5 hours into a long movement that’s 36 hours in, all the sudden you might not feel so hot, and they may take your turn. If they like you. 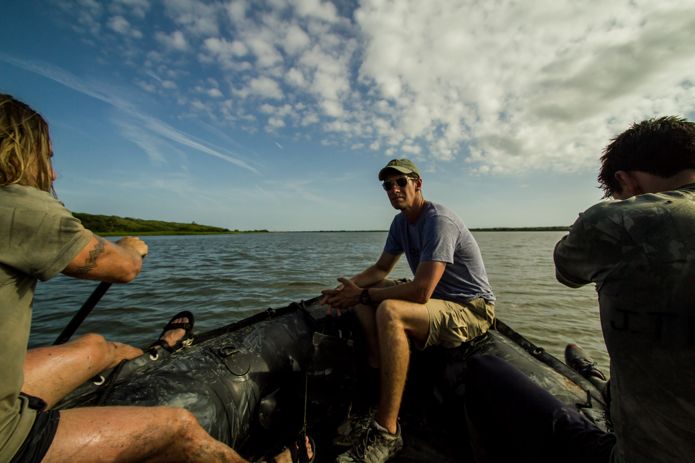 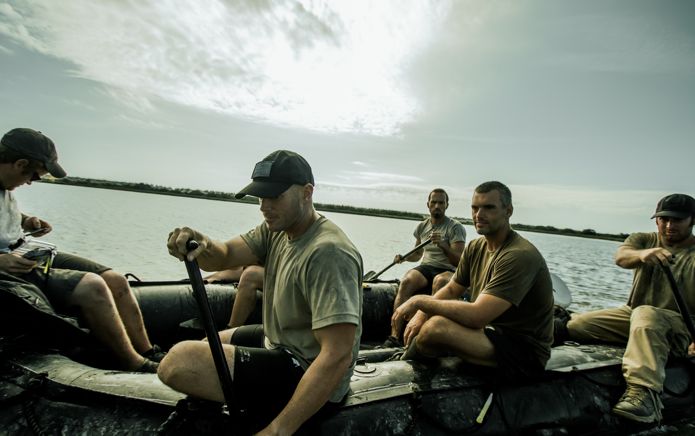 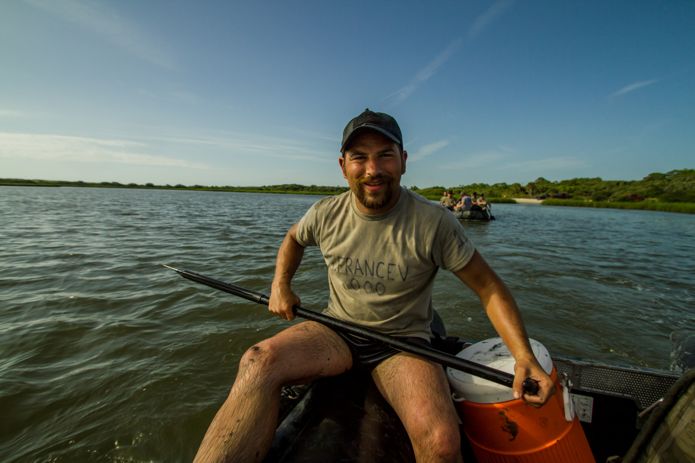 Attitude is still always everything, and mature rattlesnakes have the abiilty to keep smiling longer. Not that a rattlesnake ever smiles, but if it did…A side note is that before I joined the Army, I thought Special Forces was a young man’s game. What I found out quickly was that it’s an experienced man’s game, and experience comes with time. And a good attitude no matter what comes with experience. The best guys I knew had been there and done that, and they taught me everything. And they weren’t always the hardest, just the smartest. 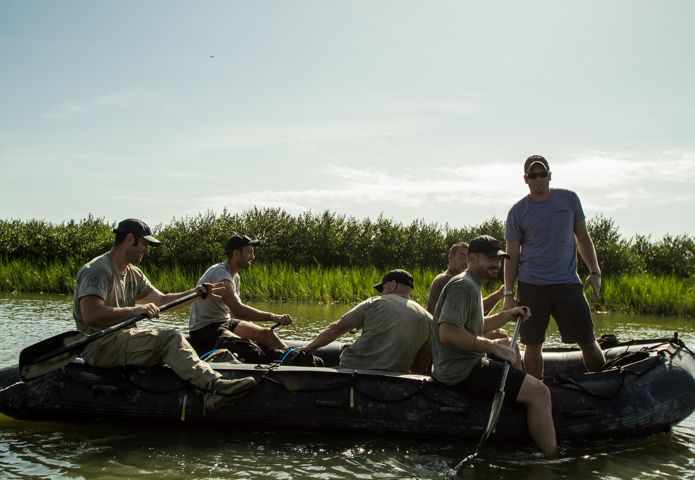 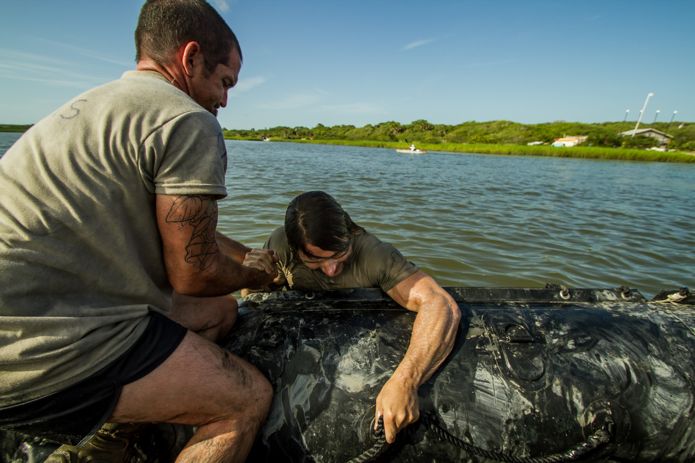 Life in the close quarters of a Zodiac is telling. And if everyone hated Webb, they would have let him pull himself out when he was too clumsy to stay in on his own – probably trying to play Washington again. His value probably lies somewhere besides coordination. 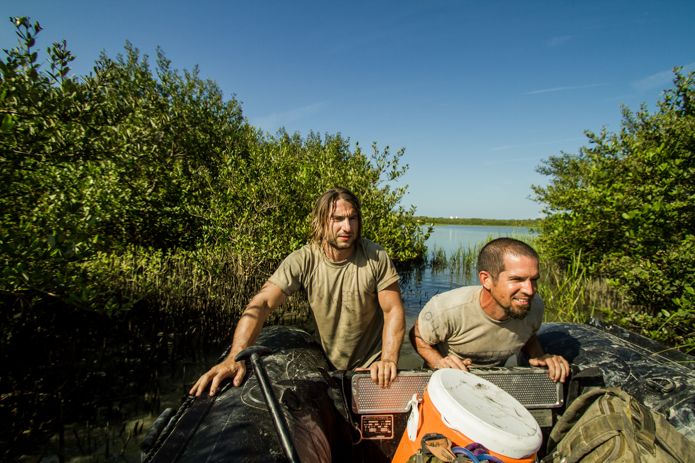 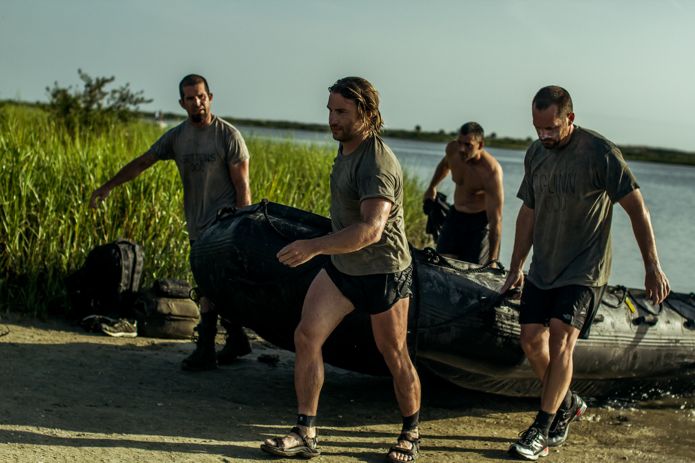 I’m sick of talking about Webb, even more than you’re sick of seeing his ugly mug, but apparently he’s ‘that guy.’ So, above, check out his sandals. I chatted with him after Selection about his feet because they looked like something Upton Sinclair wrote The Jungle about — Webb swore that wearing these was necessary, even though he wore them for hours, even though it was a violation of rule #1 and they left his feet unprotected. As a military guy, I can’t imagine wearing open sandals for any kind of movement. In fact, my ruck back in the day was too full of things like ammo, bombs, radios, and water for anything like a spare set of shoes. (Important note: buy great boots or shoes so you don’t need a spare set). But Selection is not a war-zone, so I can see his logic. Basically, he said his feet were saturated for too long and the sandals helped dry them out. So the choice is yours. My vote would be to pick one pair of shoes or boots and save on weight. Webb says otherwise. In the next post, you’ll see the ‘after’ picture of his feet, so maybe reserve total judgment till then. 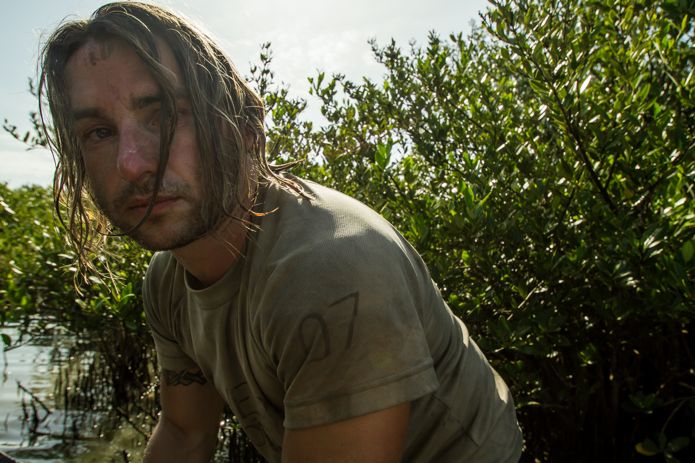 But dryer feet didn’t spare the demons. At times, the lulls are the worst. The go-go-go is easy to handle because you have no time to think. The down time, which feels like a luxury for the body, is torture on the mind. And yes, it’s designed that way. I can’t tell you how many times there were lulls on missions before the real stuff happened. And don’t go crazy waiting. So no matter what, you have to be the kind of person to drive through the lows, and stay ready. In Bob Wert speak (he was one of my old Cadre), ‘stay vigilant.’ And continue to thrive in the ambiguity of your mind’s din while you wring your socks out. And you wait. 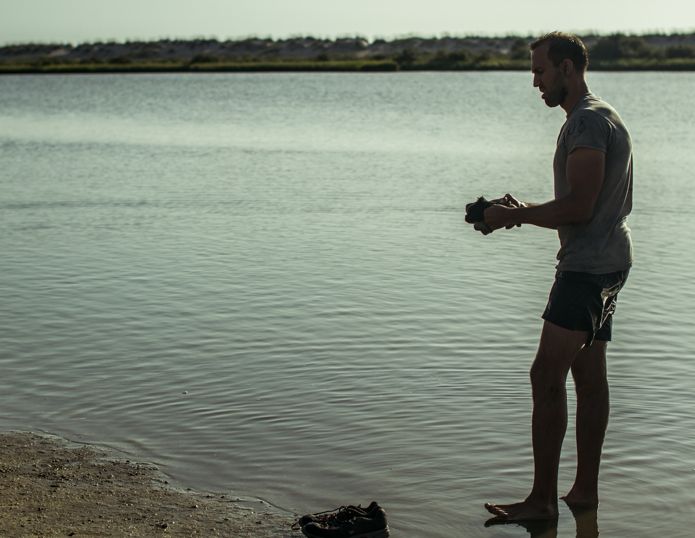 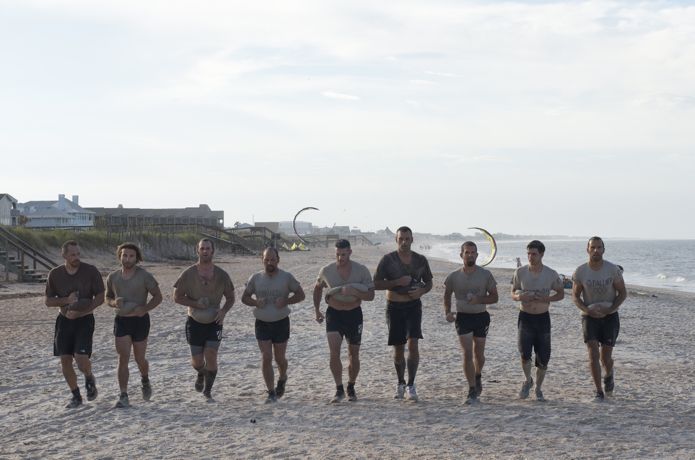 Until the new game, the old classic: ‘it pays to be a winner.’ A common phrase in the Q-Course and the rest of Special Operations training. Basically, this triggers a competition. Do your best, as fast as you can, even though you don’t know how long it lasts or what’s next. May the best man win. Above, they didn’t get it. They thought it was a GORUCK Challenge, a team event. 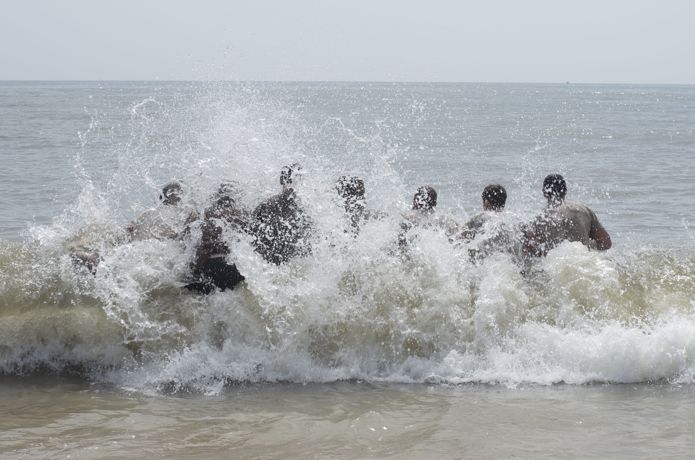 So I thrashed them in the ocean for a while, and let the ocean thrash them some more, and then they got it. The truth is that Selection is about a thrashing, so at times it’s a no-win scenario. And everything you do is wrong. They could have done the team thing a while longer, but they didn’t. I can’t say which would have been worse. Game time decision type stuff. 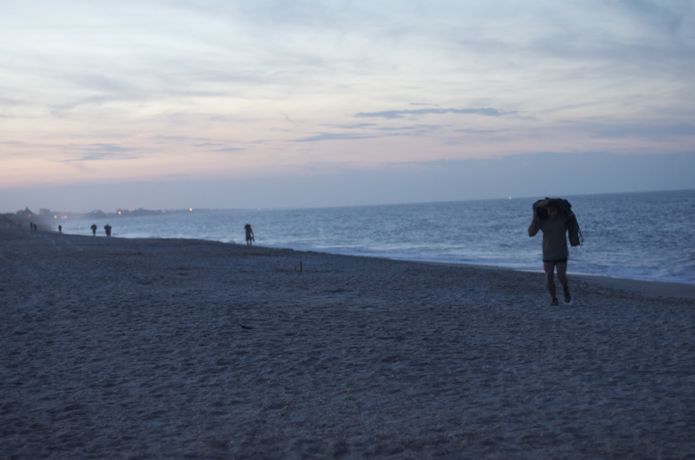 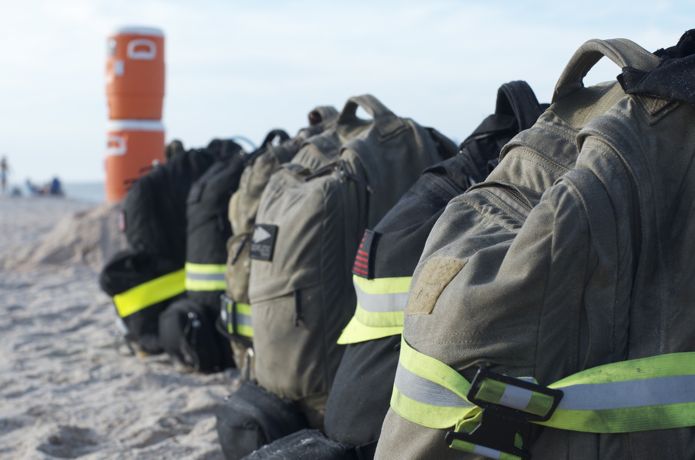 As for the being light thing. So I told them rucks off, flagpole go — then I got curious how much their rucks weighed so I investigated. It turns out War Baby had dumped all his weight. So I helped him out and filled his GR2 full of sand. When they came back it was ruck on front, flagpole go, it pays to be a winner. For some reason, he came in last. By a lot. And his team was sent to ask him why he was such a shammer. 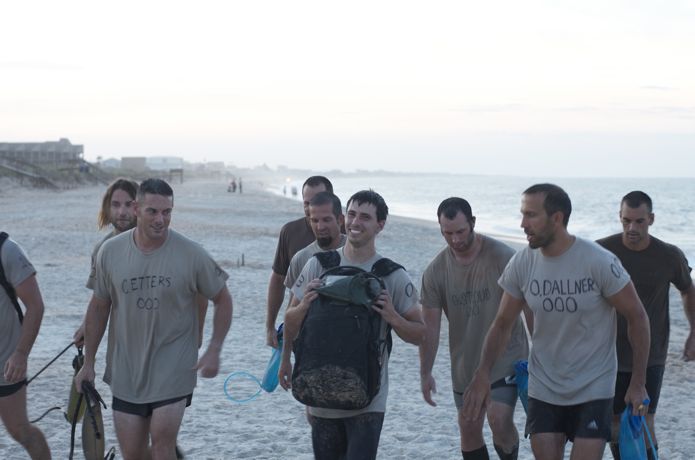 But he didn’t quit, even though we tried to drive a wedge between him and the rest of the class. Even though he was the reason, albeit indirectly, that Fruity Pebbles got hurt a lifetime aka 12 hours ago. Even though we reminded him of that nonstop, even though we saw how much he would have taken her injury from her if he could have. But life doesn’t work that way. And I thought I saw a tear or two. But he still didn’t quit, so good on him. Any weakness will be exploited, and it’s nothing personal. It’s just us trying to use your mind against you. War Baby had a lot to deal with, and I’m pretty sure we almost broke him. But I’m glad it was only almost. 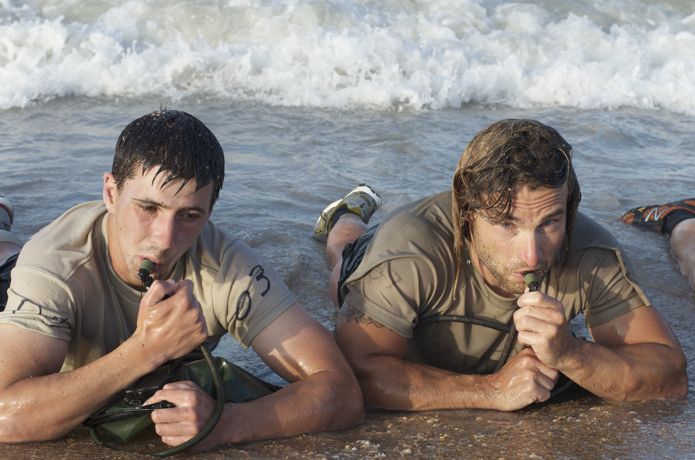 A note on hydration: it’s a process, not a destination. 99% of the time, short a freak accident, the only medical thing that keeps a person from finishing is dehydration. Spoken from someone who thinks Bud Heavy is the preferred technique, I can promise you that when I was in the Q-Course, in training, this was not the case. A few guys doing this Selection went out and drank too much two nights prior. Don’t do that, it didn’t turn out well for them. If you don’t take serious things in life seriously (but don’t forget to smile), it won’t work out well for you. Bottom line: drink water, not beer, for days before Selection. Sorry if this is Debbie Downer.

Linear is easy, and simple. Run there, do that, it pays to be a winner, that kind of stuff. But odd tasks, random tasks, take you out of the suck and into your mind. And then I saw a sand castle. A series of sand castles, and they needed exactly 8 motes around them, in 5 minutes or less. The tide was going out, it was a dangerous situation. So they dug quickly, and well. 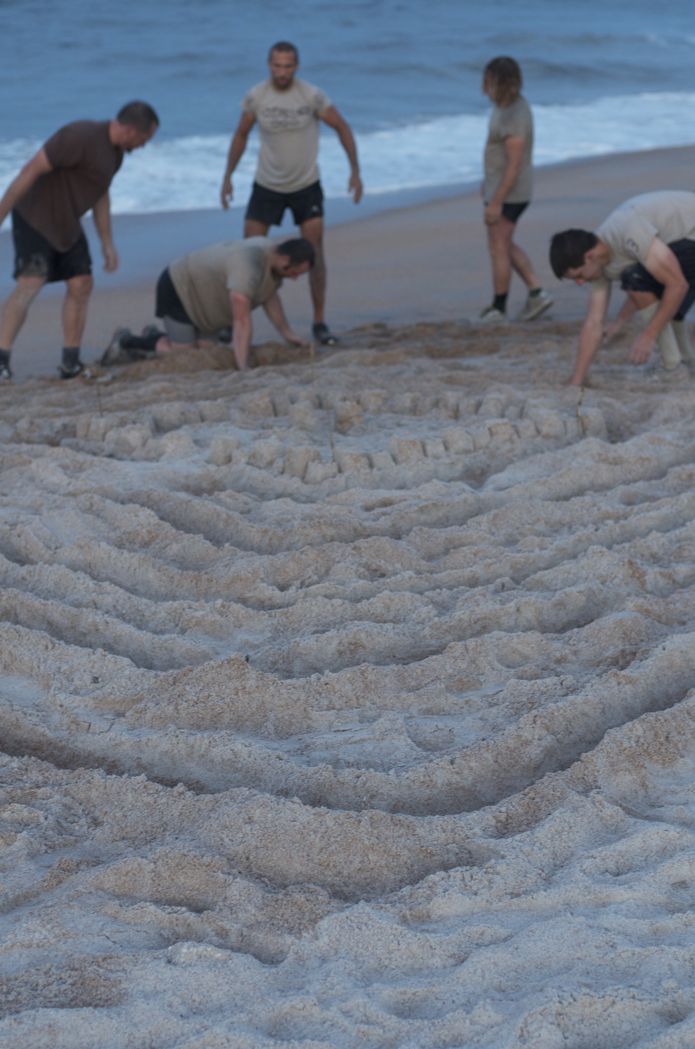 And when they (surprisingly) made the time hack, they all smiled. Except for Etters, below. But Etters is a Highway Trooper on I-95, probably the cop that pulled me over in Connecticut when I was 16 and doing 90mph and had no money. And there was no smile then, either. So this time it was my turn: Smile or Die. And Etters smiled as best he could, and all was right by me, so we went back to it pays to be a winner, this time by night. 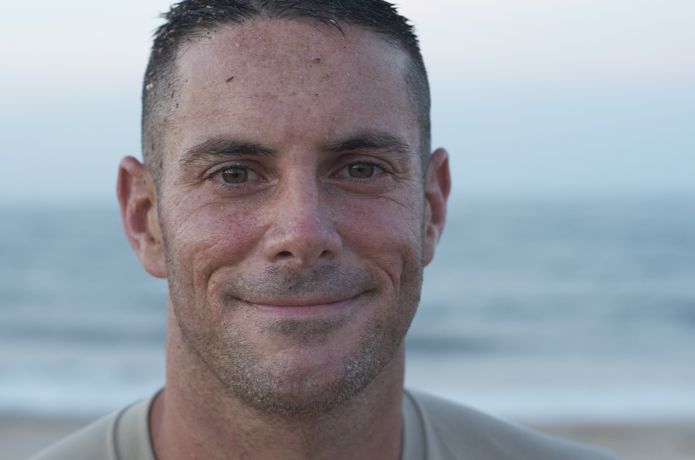 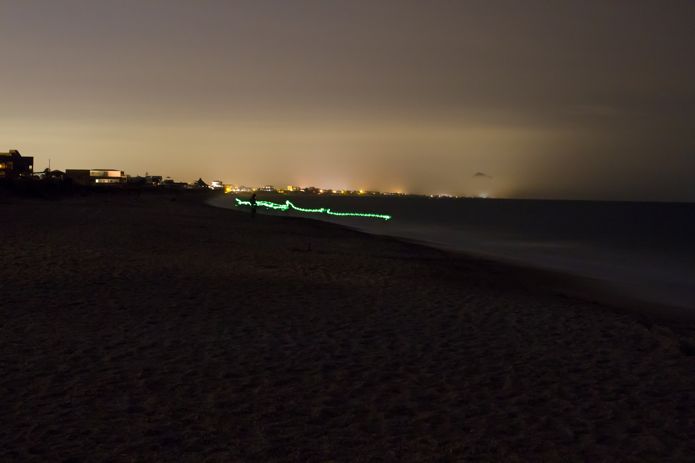 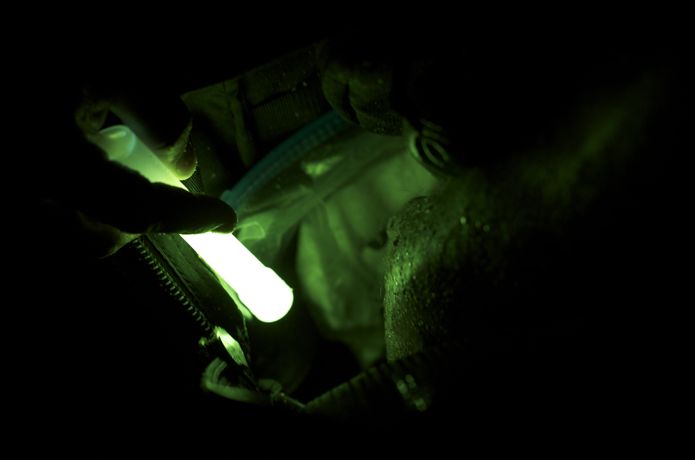 Above – nighttime makes it harder to get at the things you think you need when we give you 10 seconds of down time. All the more reason to have a system. White lights are not allowed. Something about, tactically speaking, it takes 30 minutes to develop functional night vision, and it takes 1 flash of white light to ruin it. If you have to dig in your ruck forever under a green chem light because you own a gypsy camp inside your ruck, you probably won’t have time to find what you need. So know where everything is, in the dark, and know how to find it fast. 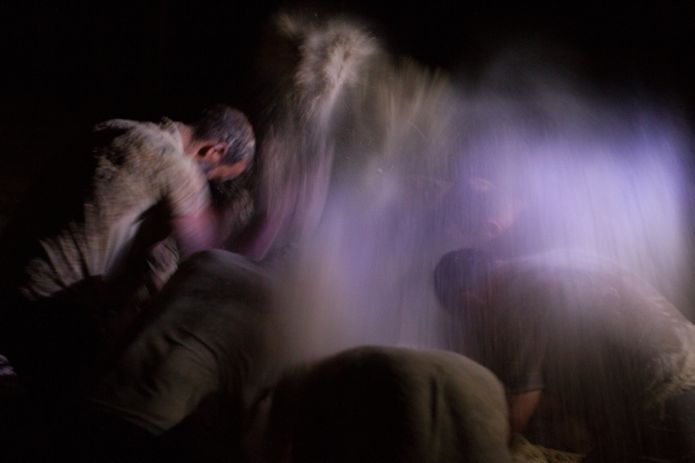 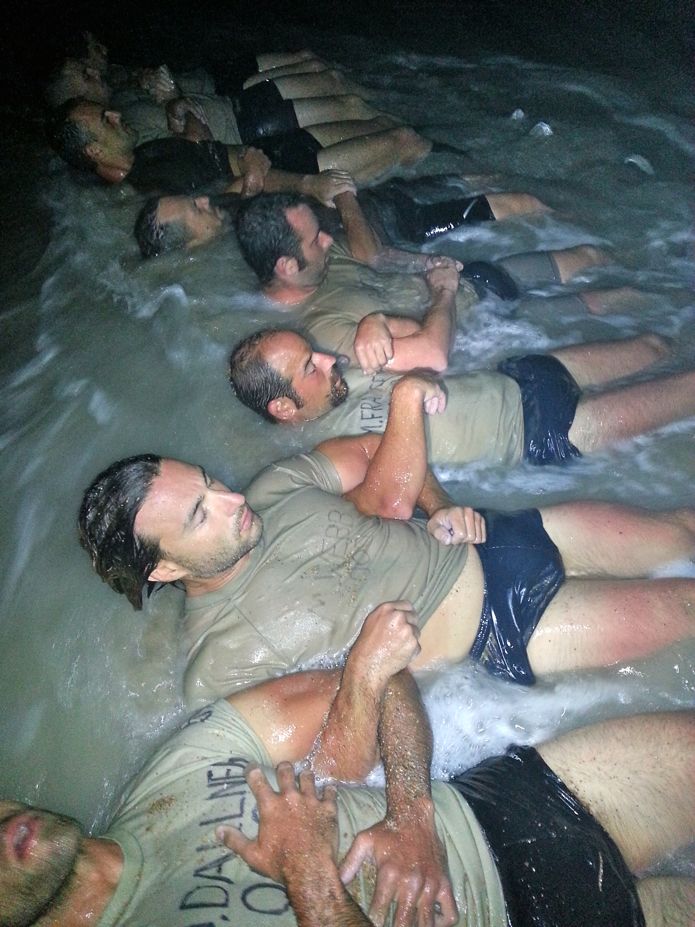 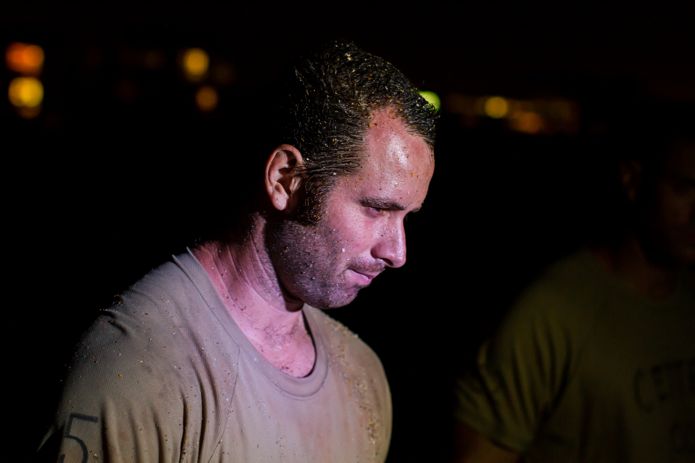 And it gets really old, and demons come. When you live life, demons will find you. It doesn’t matter what you do. Life’s not easy, but there is value in fighting through, and in learning how to get to the next thing. We lost one to the surf. He played the game, bargain with myself, which you always lose. I put them in the water, which was his ‘line in the sand’, and away he went. I was sad to see him go, but that’s life. And then there were 8. 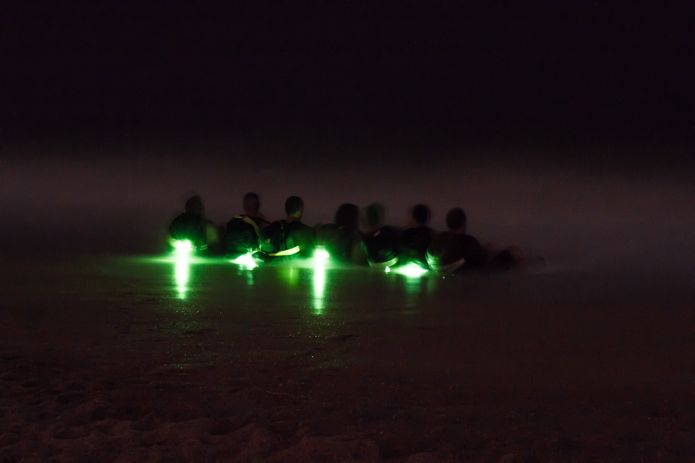 Above, the first 7 back waiting on the 8th to get back from the flagpole. It pays to be a winner stuff. And then we rinsed them off, and the night dragged on before the final push came. Part 5, the final post on Selection Class 000, coming next week. The final 8 and an ending that reminded me of a certain ending in the Q-Course that made me cry. 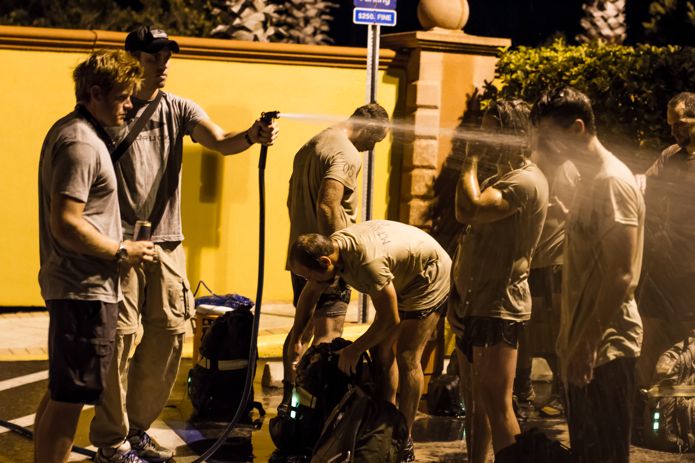