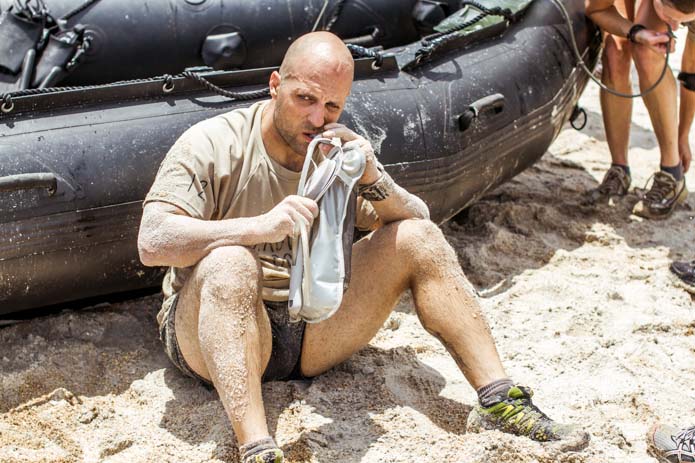 It all started with the Selection Screener 000, when GORUCK posted an open invitation for any people who were willing to subject themselves to a new event to apply. I was all over it and even talked Mike Knaisch into it. I wasn’t really sure what we would be doing because according to HQ, “details were not forthcoming.” I thought it would be like four GRCs in a row. I watched all the Surviving the Cut episodes that I could locate and was like “cool, let’s do this.” I really didn’t train for this except for doing CrossFit and rucking.

Fast-forward to July 19th — Screener is a day away in St. Augustine. The daytime temperature is floating right around 100 degrees. I am so confident that I go out drinking and partying the day before. I neglect hydrating with water or any electrolyte drink. Well, about 10-12 hours in I voluntarily withdraw (VW) because I can’t hold anything down, which happens to be mainly water. I am vomiting everywhere. I don’t remember this, but I’m told I looked like absolute hell. I was pale and bright red all at the same time. I was so dehydrated that I was becoming emaciated. I wasn’t pulled, I quit; and wow did I cry.

First, let me say the Cadre – Donnie don’t call him that he hates it, Patrick, Jason, and Lou – were nothing but supportive. I thought that I would be looked down on, but just the opposite happened.  Cadre Donnie don’t call him that he hates it threw me a beer; said “hang out in my room and relax.” I will always remember that moment. I was going to leave and head home, but I truly felt I had to stay and support the people still going strong. It was an emotional battle I was fighting. I remember Lou telling me to stop and try again, so I signed up for Jacksonville Beach Class 002 ASAP.

Now on to 002. I trained and trained hard. Losing weight was not enough, but damn did I ruck with heavy weight and run, but again it wasn’t enough. I was ready, or so I thought. Mike K. offered to drive me up from Sarasota to JAX Beach, which is just one of the reasons why I love this community. The support and friendships I have made are truly amazing. You can’t choose family but you can choose friends, and with GORUCK I get the best of both worlds.

Class 002 starts with intensity. I won’t go into details on everything that went down, but the Cadre brought the heat. I was holding back a little because I knew what was coming. I’ll skip ahead and not bore you with all the details; besides, what happens at Selection stays there. It was down to Kling, Mike Petrizzo and me. I felt great. I was thinking, “Shit, 24 hours left, this will be easy.” Well, the forced ruck march on the soft sand with Carlos and Silver crushed me. It got in my head and my body and once again I VW’d. Carlos gave me more than ample time to get up, and I will always remember that. I got back to the team house and being that I am a very emotional person, I felt I let the whole world down. My family, my friends, myself… boy, this is hard to even write without tearing up. Moving ahead, I got to the team house and the first people I saw were Greg Stroud and Matt Francev. I think I held and cried with them like someone had just passed away. I really felt like it was me who passed away. I lost a part of who I thought I was on that beach.  Let me say I have great friends in the GRT community – I can’t name them all, but some really have touched my heart. Matt Francev, Mike Knaisch, Greg Stroud, Mark Webb and Olof Dallner (that man is just plain awesome!!)

Why do I want to keep putting my body and emotions through this? Good question, and I wish I could tell you. I just know I will keep trying until I get that patch or HQ DNR’s me. I know I can do it; I have the mindset for it. Being humbled is a hard but awesome feeling and experience. Failing at Selection has made me learn a lot about myself. These experiences have made me a better person. Now don’t get me wrong, I am proud of a lot of things: my time in the Army, going to the Gulf War, my daughter Rebecca (don’t even think about it, boys) and running a successful company. This time around, Selection will all be about me. Cadre Dan told me you have to go with the “kill or be killed” attitude, and I plan on doing that. I need to do this for me. I also feel that I want to do this for everyone who believes in me. I do not want to let anyone down again, but more importantly I want to prove to myself what I already know: that I can finish Selection. I’ll be back for another round at JAX Beach in December. Expect a few training updates before then.