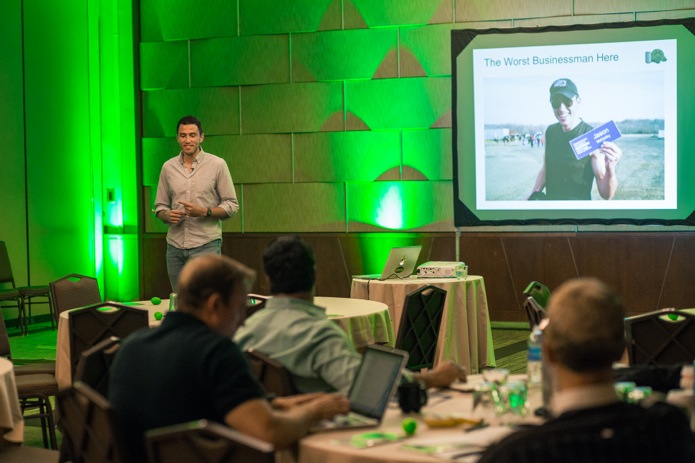 A GRT recommended I speak at a Maverick event his buddy was organizing and I did two seconds of research isn’t Google a great place and found out it’s a bunch of super successful business types and I said that’s the dumbest idea I’ve ever heard, me speaking to them. Plus I’d probably rather do something anything else and I love my full time job. What got me though is that this group of super smart business types would also be helping the Green Beret Foundation execute a new program designed to make it easier for GB’s to find work in the civilian world. As this is a cause near and dear to my heart and one I would happily dedicate my life to, I agreed even though I promised I was the worst businessman in the room. And that was the lead slide in my presentation, which was meant to be about how to create a raving fan base and if you disarm ’em early you can hit ’em hard next. 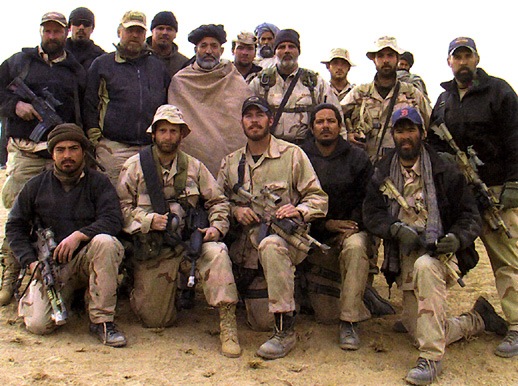 I had ulterior motives and my main one was to talk about the mission of the Green Berets and I smiled in a huge way when I realized, as I was piecing my presentation together, that Green Berets are actually the masters of creating raving fan bases, by with and through. Above is an ODA aka A-Team with the future President of Afghanistan, Hamid Karzai, in 2001 in Afghanistan. This is the culture of warriors that I grew up in (Special Forces), and this is the only culture I really know. And when you’re in the boneyard of the Soviet Union and you have to win, as we (meaning our community of warriors on behalf of all Americans everywhere) did in 2001, you better do things a little differently something about the definition of insanity is doing the same thing over and over and expecting different results. So the Green Berets created a raving fan base called the Northern Alliance to go along with our other raving fan base called the United States Air Force which was an easier sell ha ha and we defeated the Taliban by having our local Afghan warriors defeat the enemy for us (and for them). And as I chatted next about GORUCK and the three rules of Special Forces and my story and love and loss and the price of war, ultimately my main point was that creating a raving fan base is life or death to Special Forces guys and this is all I really know how to do and I owe that to the guys pictured above, and to the other members of this community who trained me and who I was privileged to serve beside. 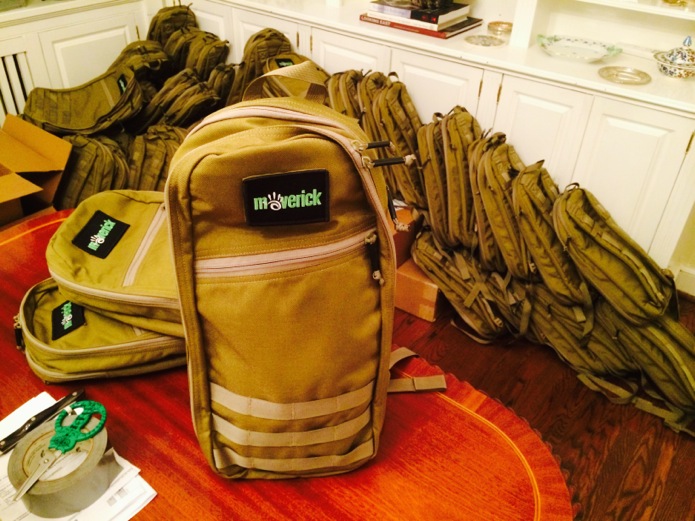 And the Mavericks wanted a taste of our training, a taste of the team building that goes on in Special Forces, so our Lead Cadre Garrett led them for 5-6 more like 7 hours in our nation’s only capital overnight. The National Mall was quiet and perfect as it’s wont to do, a reminder of the sacrifice we and by we I mean Americans have made since the beginning of America. Of all the cities to do an event in, DC is my favorite. NYC is usually too hard, 9/11 and Ground Zero feeling like that place that changed my life and the lives of everyone I know and sometimes I don’t much wanna go back even though I do, go back that is. DC keeps our nation’s sacrifices in the context of all the other sacrifices I’ve read about in history books and reading is easier and I’m still due a trip to the National 9/11 Pentagon Memorial and Arlington gets me every time but till we have a monument to Iraq and Afghanistan on the Mall, DC is where I go to pay homage, not to remember and not to cry. 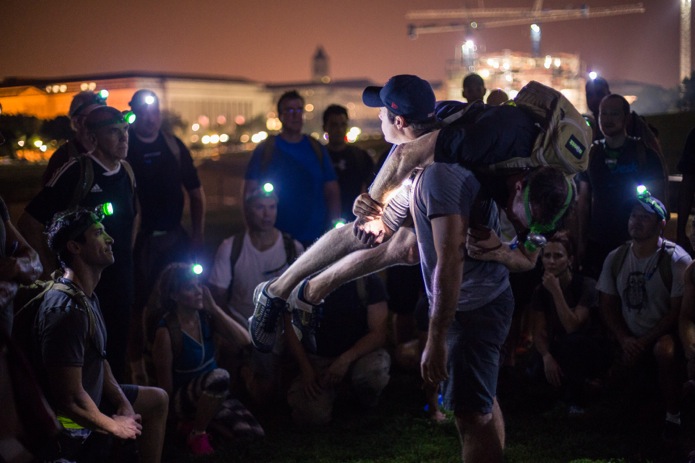 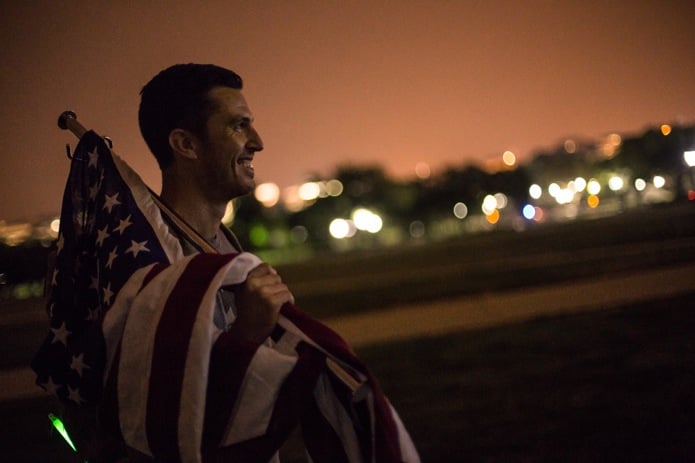 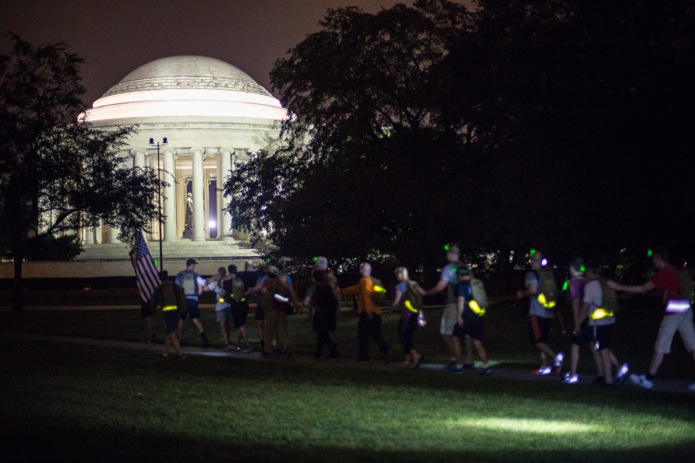 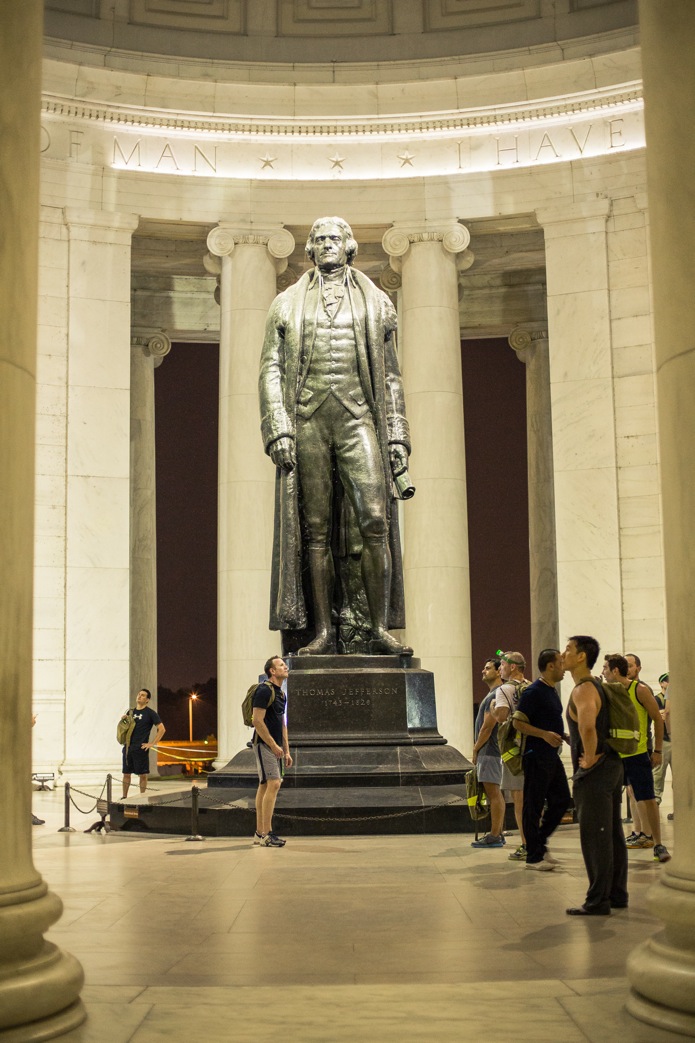 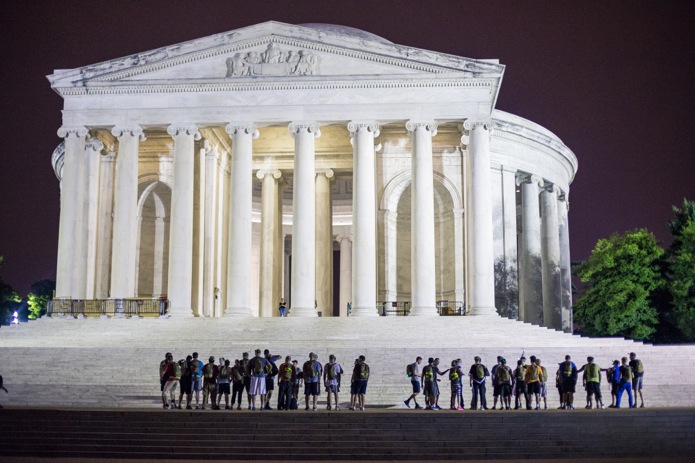 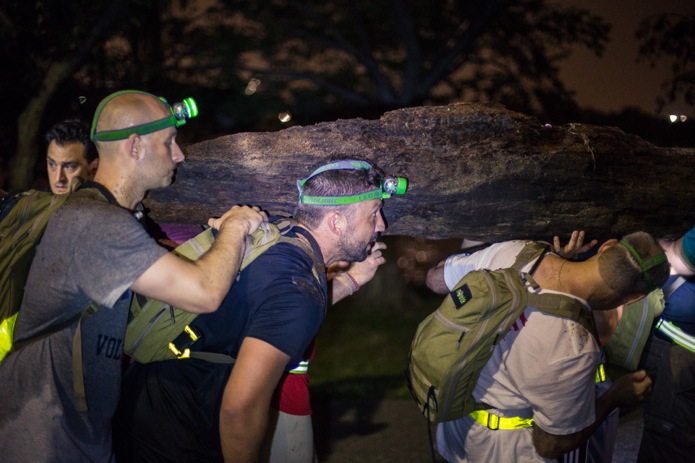 And they wanted a taste and they got a taste, you shoulda heard Garrett say welcome to my world tonight and the log is basically the great team builder and it does all the work for the Cadre. 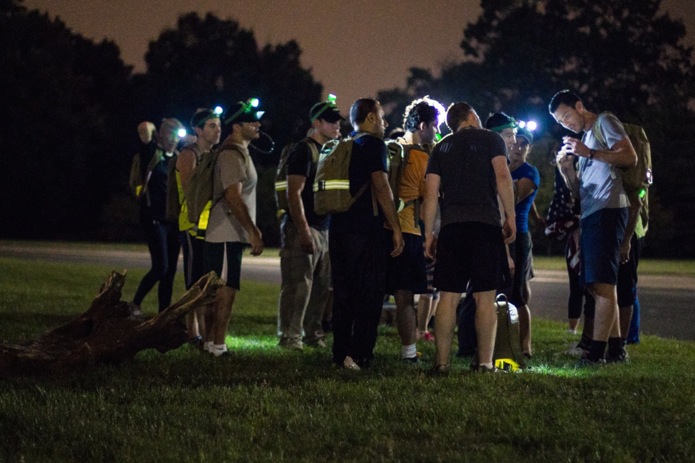 Rule #2 Never Get Lost. At least there’s Rule #3 and at least there are iphones with maps on them can you imagine a world where you had to actually pull out a paper map wouldn’t that be weird. 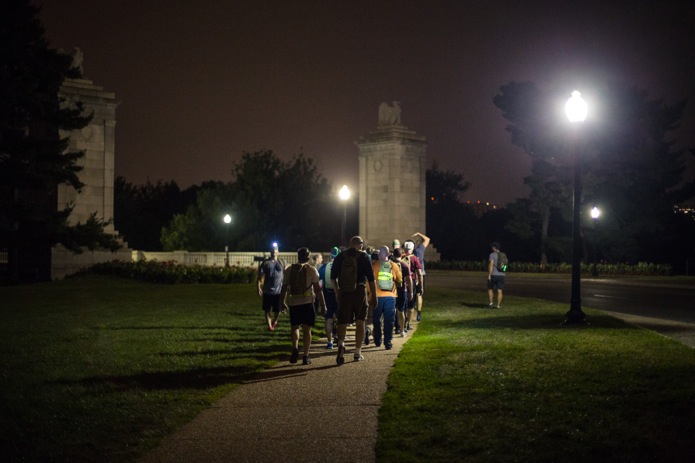 Rucking to Arlington and then I said something about how I have a lot of friends in there and so does Garrett and that’s too many as far as I’m concerned. But that the sacrifice of our military is not destined for all and there are a lot of ways to give back to America, even in a time of war. It’s easy for those of us who have served to blame those who haven’t for not answering the call especially after 9/11. All I’ll say is that without 9/11 I never would have served. Had 9/11 happened at a different time I might not have served. And I know because I’ve met them that there are a ton of great Americans who have never served in the military. But service comes in all shapes and sizes and if you’re a teacher or a doctor or a fireman and you get it those are all service oriented jobs. But if you’re a businessman and you dedicate some time, maybe you dedicate some resources and some cash to a cause you believe in, then that’s another form of service. So I thanked all the Mavericks for hosting a jobs seminar and for their financial contribution aka a check for $15,000 that they made to the Green Beret Foundation and $5,000 to Stay in Step. Money isn’t free and what’s even less free than money among this group is time, so to those who were there, thank you most of all for the time you spent (and have committed to spending) bettering the lives of the Green Berets. 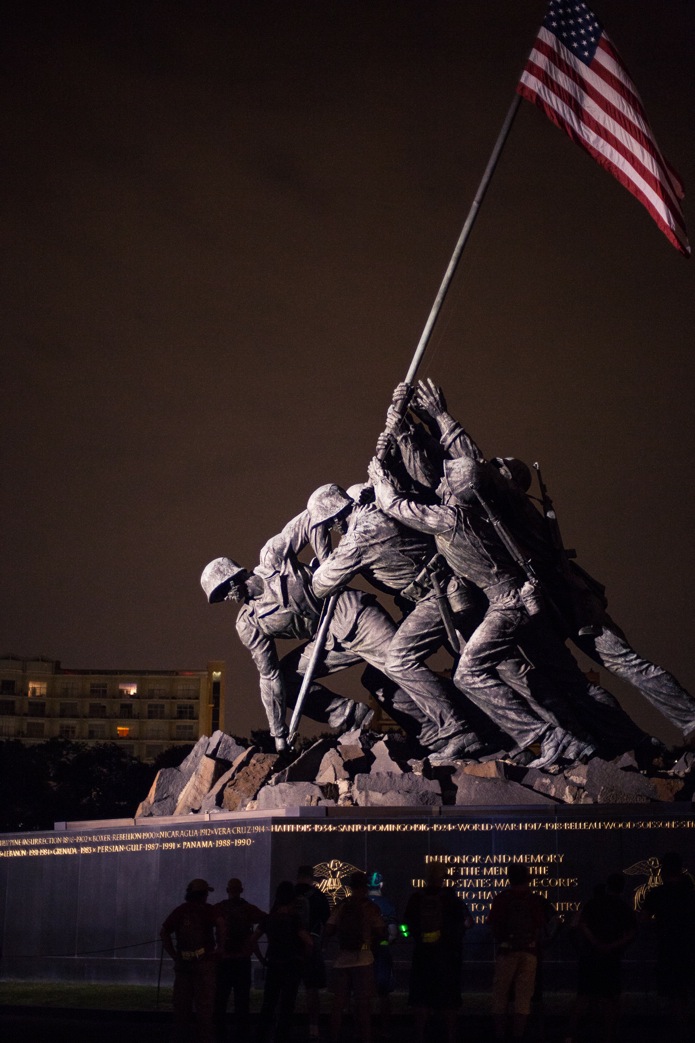 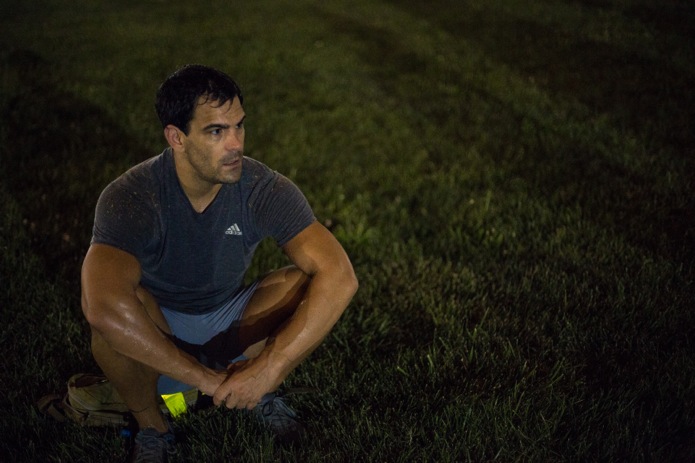 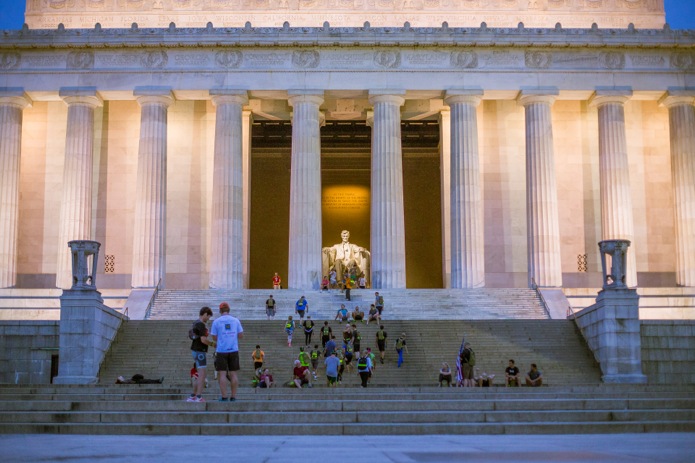 Daylight always brings optimism, as it should. 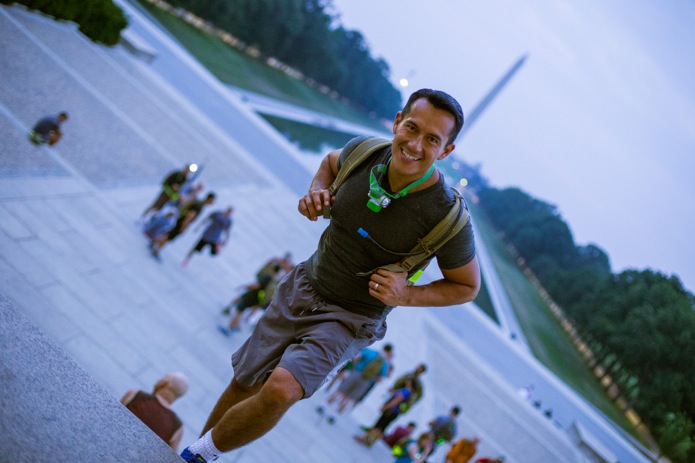 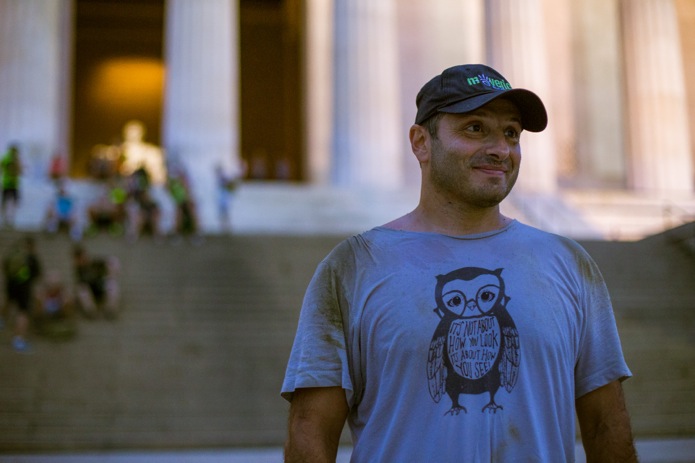 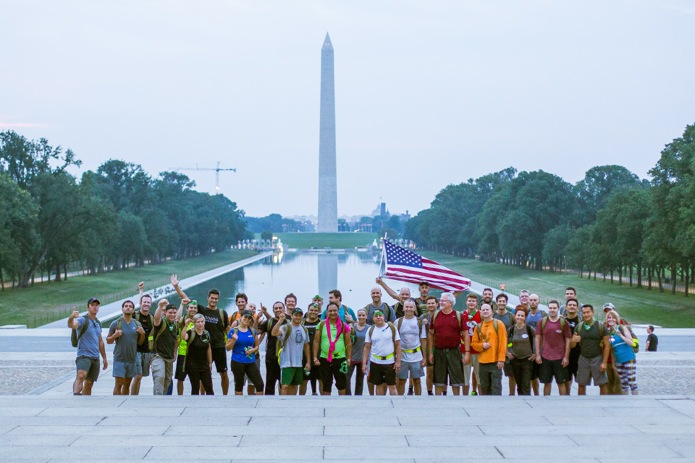 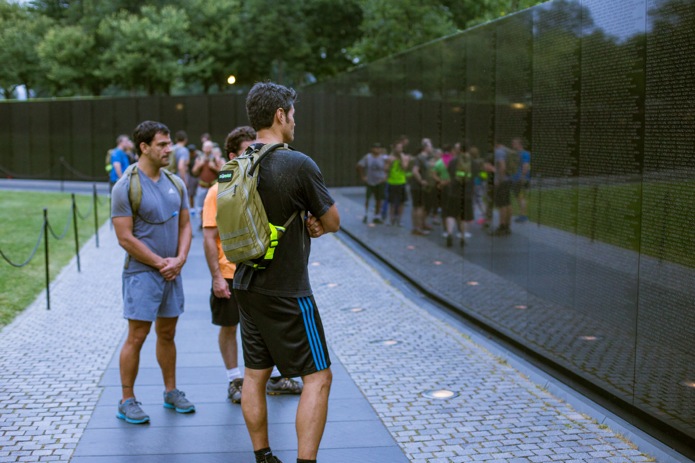 And they asked me what I thought about Vietnam and what’s its legacy and I told them I thought there were too many patriots’ names on the wall and then I walked off with tears in my eyes before they could ask me about Iraq or Afghanistan or any other place that might not feel like a wall I can only almost relate to. 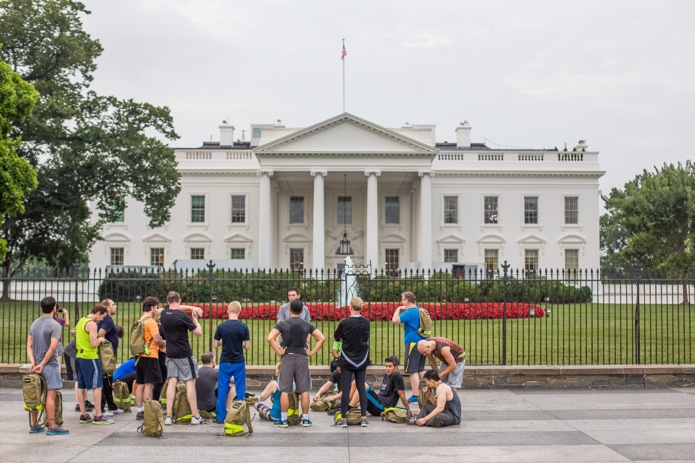 I wanted this group to understand a sacrifice made by my community and by all communities in the military, but you can’t sit around all day and think only about the loss, it’s gotta inspire something in this life for those who remain or we’ve missed an opportunity and my culture is a work hard play hard place and war is a contact sport and shit happens and when it does you raise a beer to the fallen and you move on and it sucks. And don’t forget the move on part and I don’t know one guy in Special Forces who didn’t mandate that his funeral be a party should he meet his fate and it’s an unspoken rule I guess because I’ve never heard anyone speak it but if someone dies you owe his family and you owe his friends and you his life a party and some stories you all laugh at and that’s just how it works. 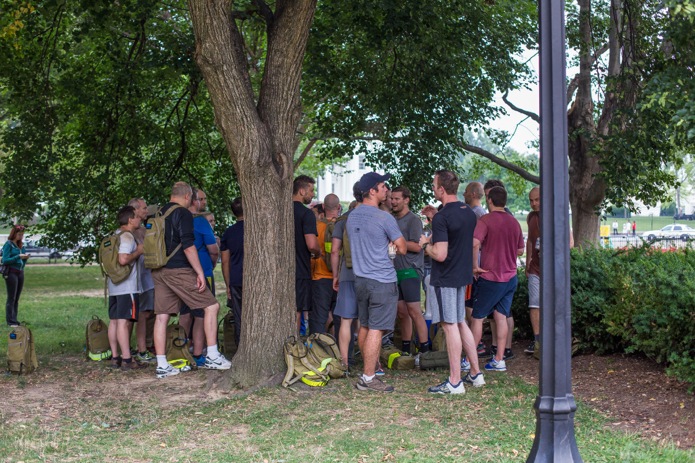 Rucking around a city is not life or death but kind of how a picture can take you back to a time and a place so can GORUCK take me back to rucking at Fort Bragg and other places and to the commitment you have in the military to the man to your left and your right.

And Ruck Hard, Play Hard in a short life and sometimes that means you huddle under a tree by the White House once you’re done rucking and wait what did someone bring cold beer? 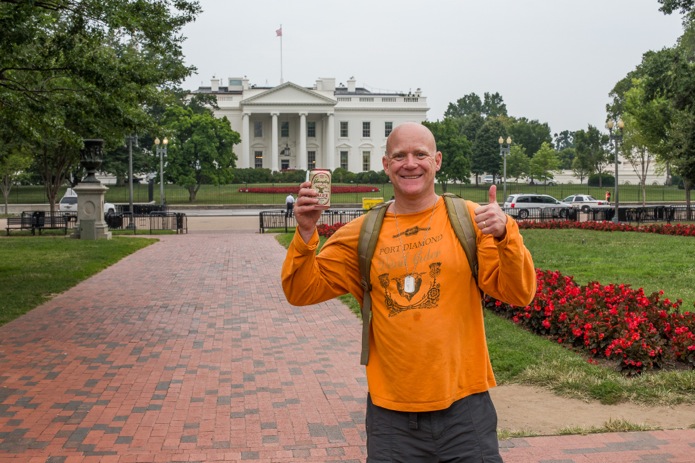 Why yes someone brought cold beer and thanks to everyone who showed up I lost the bet with Garrett because I underestimated you, a mistake I won’t repeat next time, I promise.

This engagement with Maverick 1000 and the Green Beret Foundation was part of GORUCK Solutions, the corporate and customized training arm of GORUCK.