My name is Sara Jones and I am 45 years old. I am a single mother of 2 boys Christian (18 years old) and Harrison (16 years old). In 2018, my family lost our house in Hurricane Florence. We literally had the clothes on our backs and what we packed in our go bags. In 2019, I left my now ex-husband after 24 years of marriage after trying for 7 years to reconcile and repair after he had an affair. By October of 2019, I was full on hot mess, single mother of 2 and found myself weighing in at 270 pounds. I had sacrificed myself for everyone else around me to the point that I didn’t know who I was, where I was headed or what was going to happen. I found solace at the end of the bottle for a few months. I was barely holding it together and I realized that two teens were watching me. 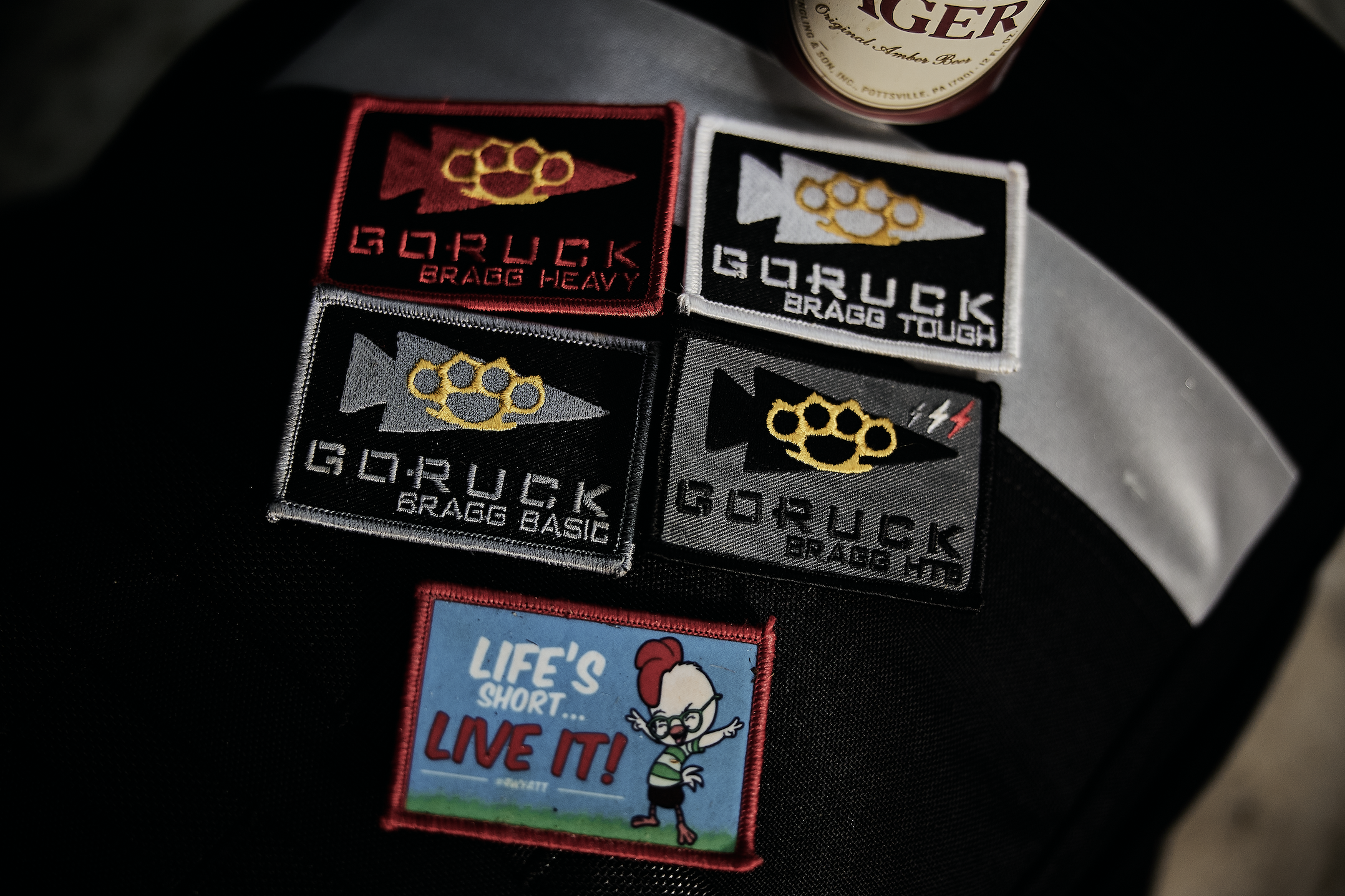 I decided the first step was to stop drinking, start moving and find a counselor. That night, I poured out the remaining Basin Hayden’s, set my alarm for 0400 and called a friend and got a referral for a counselor. After a few days, 0400 was a welcome relief. It was my time during the day that I could laugh, cry and face my demons alone while talking to myself and sorting through my thoughts and feelings. The following week I went to counseling. After a few sessions I was challenged to find something I had never done before in a city I had never been to and stay in a hotel by myself. After a few google searches a GORUCK video ad popped up and I was hooked. I watched it and was like…I could do that. A few hours later, I was signed up for the GORUCK Great Raid Light in Charlotte, NC on January 18, 2020.

My fitness journey “officially” began November 1, 2019. After I signed up for the event, I printed off the GORUCK training program, threw 4 bricks in my Northface backpack and set my alarm for 0400. Thank goodness that discipline was already in place. I rucked 2 miles, did bear crawls, push ups, sit ups and flutter kicks.  This continued for the next two and a half months. Once again, my children questioned my actions, and decisions, but laughed and supported me.

January 17, 2020, I packed my backpack, I packed my overnight bag, watched the GORUCK Light video and prayed that I did not die or quit the next day.  January 18, 2020, I drove to Charlotte, NC.  It was chilly, rainy and I thought “Who does this?” I found the starting point and waited for an hour.  I watched cars slowly pull in and people began to mill about.  I thought, “you can pull away and no one will ever know…”. But I decided I could not do that. I had made a commitment and my kids were watching.

I pulled my Northface out of my car, checked my packing list and walked over to the group that was gathering.  Immediately, a guy walked up, introduced himself and asked if I had ever done an event.  I said “no”, he said “the Northface was a giveaway”, we laughed and have been battle buddies ever since.

Cadre Dan and Fagan were the Cadre that day. I was intrigued by the whole process from Admin, the Welcome Party, the history and the people. History with Cadre Dan has since become my favorite subject! He took our rucks, and recreated the timeline. I was read up on the event because I am a nerd and was not sure if we would be quizzed.  Their excitement and passion to share their story drew me in, not to mention the abundance of “fuck” and “fuck ‘ems”. I was sold.

At the end of the event, when I got my patch and beer, I knew that this was the first of many events. That night I found myself in the hotel, looking at dates, texting new friends and signing up for events. I had 6 on the books by the end of the night. When I got home, my kids were waiting in anticipation to hear about the event, and see this “patch”.  And in true teenager fashion, they gave me a hard time about doing all that work only to get a “patch”. I put the patch on my nightstand and it quickly became an inspiration.  I wasn’t as concerned about earning patches as I was about being with the people.

Since that day, I have trained, met people, traveled, and demanded more of myself. Every event up until July 2020 was about me…and proving everyone else wrong or what I could do. Looking back it was selfish, but the journey I had to travel to get to where I am today. The July 3rd Tough was the day my attitude changed. My battle buddy from January showed up.  David Tasillo wasn’t participating, but came to wish me luck and send me off on my first Tough. I realized at that moment that it was not about me. It was about those around me, beside me, never in front, never behind took on a whole new meaning.

That night Cadre Dan asked us our why. My response “I want to be a badass and carry heavy shit”. It was no longer about a weak, timid girl that showed up in January, but a warrior who knew she was  a good teammate and was there to do my part. During the event, I was walking with Wyatt Hatcher. Cadre Dan came up and started a conversation with us about my spearhead tattoo, and by the end of the conversation, I was considering an HTL, talking to Wyatt about doing the Bragg Heavy and dreaming big about something called Team Assessment. 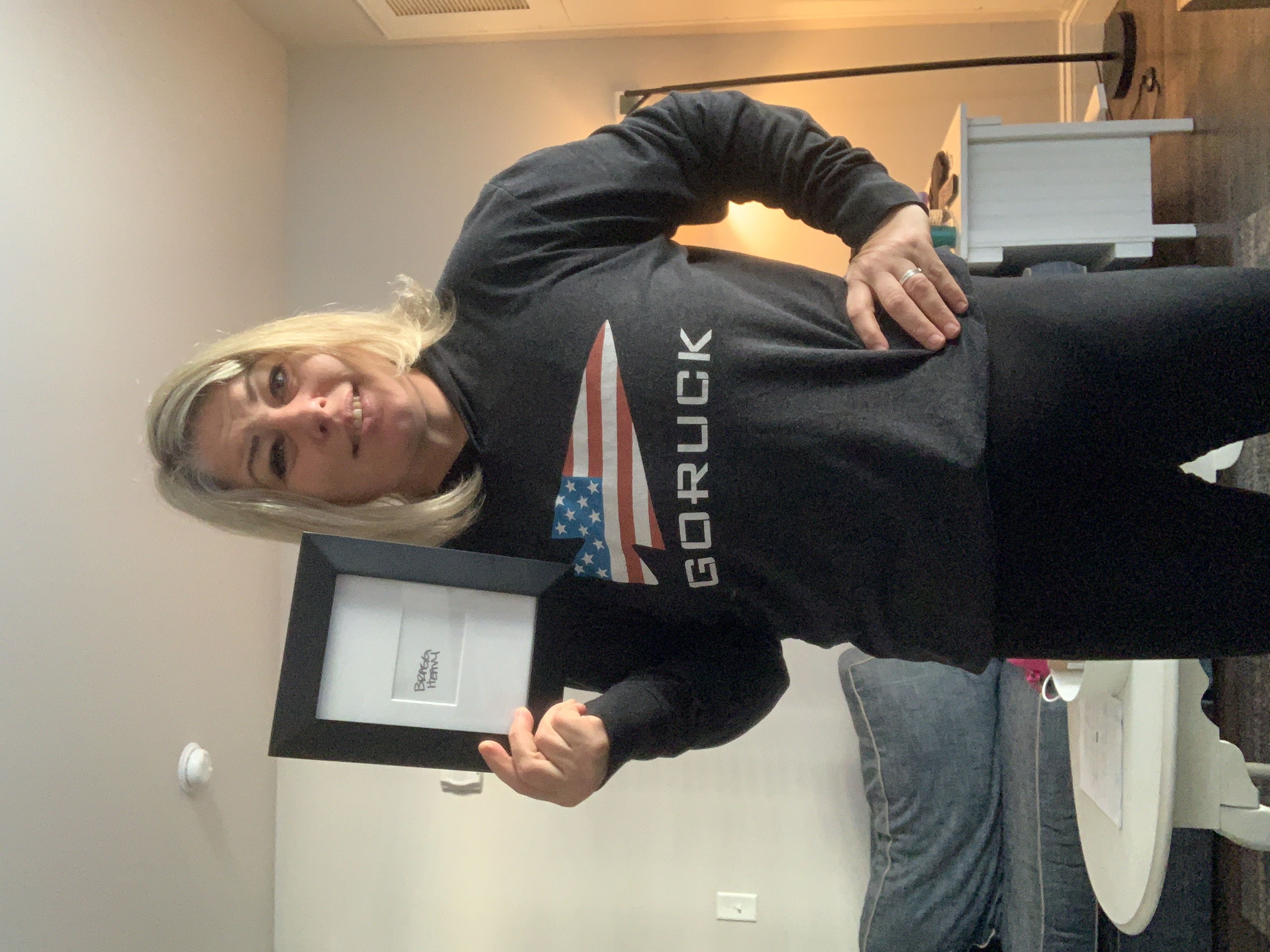 July 5, 2020, I decided to turn big dreams into goals. I went to the store, bought 3 picture frames and wrote HTL, Bragg Heavy and Team Assessment Class 003 in them. I hung them on my wall above my TV. My kids were quickly intrigued again at my crazy ideas. I explained to them that it was time for me to do a few things for myself. Yes, events were fun and I love the people, but now I was training to accomplish things that would require a total transformation. Physically, mentally and spiritually.

I began training 2 hours a day, morning and night, and found a personal trainer to help me increase my strength. I started Pathfinder with Amy and Lyell Peterson. This was to prepare for the Houston HTB in February 2021. In November 2020, I did my second event with Joe Baker. It was during the Chad 1000x that we talked and I realized this guy was the real deal. I had heard his name, met in July at the event, but at 0dark30, when things sucked, he came up behind me and said “this is where winners are made”. I ran faster than I had ever run before and knew that I needed his support in my life. At the end of the event, he told me about Joe Baker Fitness and by Sunday I was signed up.

From July 2020 to February 2021, everything I did, decisions I made and training was based on the HTB.  Once again, a huge goal that seemed impossible (especially considering I had never even done a Heavy) focused my drive and determination.  I got through my second Thanksgiving and Christmas by rucking and doing PT rather than turning up a bottle of bourbon.  However, it was January 2020 when I walked into the gym, my trainer looked at me and said “something’s different”, I said “yup, I’m no longer surviving…I’m thriving…I can actually feel myself healing”.  That was one of the most incredible moments in my life and I’m not sure if I wasn’t training and supported by my GRT tribe I would have gotten there as quickly as I did.

Then February arrived, the HTB, a snowstorm, my flight being rescheduled 8 times in one day, packing for weather from the 20’s to 80’s, and making it all fit in a kit bag and my Rucker 2.0. I successfully made it to Houston and was probably the most nervous I have ever been in my life.  But there is something about Admin and Roll Call, my heart settles down and I go into event mode.  It’s no longer about me but my team. 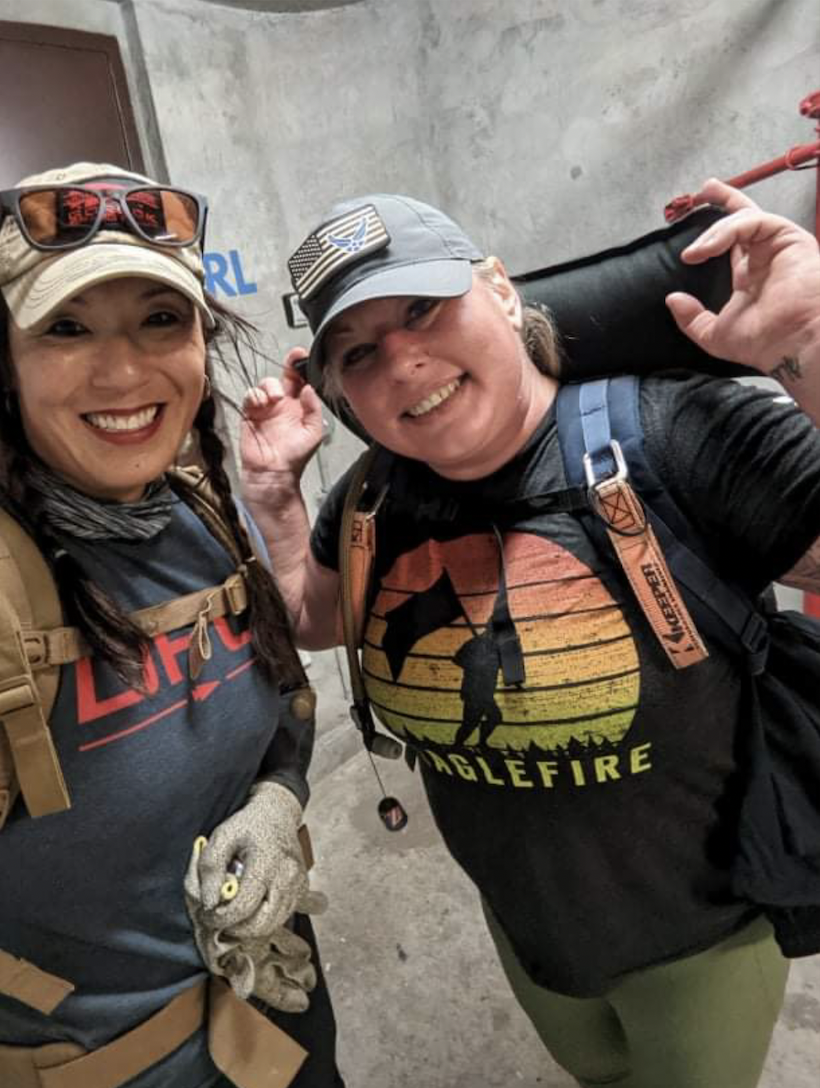 Training continued, I participated in events, lost weight, and was living a healthy lifestyle, but September 13, 2021 once again my path changed. I posted in Tribe about my recovery from the September 11 TL.  That my body was able to do more, work more, and recovery quicker thanks to my training. Once again Joe Baker asked me if I was ready to “step it up” in preparation for the Bragg HTB to which I replied “of course”. For the next four months, I trained 3 hours a day, worked with Joe, spent time in the gym (and my 80# sandbag named Cleve) and received beatdowns from Bridget Lesnick.  I ate like an endurance athlete fueling my body and sleep became as important as training.

January 13, 2022, I weighed in at 143 pounds, packed my 20# plate and sent a picture of my empty frame to Bridget. She told me to bring it to the event, we were taking pictures with the patch in the frame!  I drove to Fayetteville, NC to Fort Bragg that afternoon and I spent the night with 11 other weirdos I didn’t know because you know everything your mother taught you goes out the window at a GORUCK event!

The next 24 hours were some of the best I have ever experienced with Cadre DS, Cadre Chuy and Cadre Dan. This is what I had trained for. I did everything that was asked, I was a good teammate, I carried heavy shit and pushed myself, but most of all, I was able to show my children to setting big goals, working towards them and achieving them is possible at any age! Nothing says success until your 16 year old says to a friend who asked about the patches on the wall, “yeah…my mom’s a badass…let me tell you what she did.”

The take away from my story: dream big, set goals, work hard, be disciplined, it’s never too late to change and enjoy the journey (it’s all about people)! That frame and patch now hang proudly on my wall next to my first set of bolts, one frame left to fill. Time to dream big, set more goals and figure out how to accomplish them!

The greatest part of this journey has been the people. GORUCK is an incredible company doing awesome things, and the relationships it has afforded me are priceless. Every patch I have earned EXCEPT the two on my wall, have been gifted in honor or or memory of the individual I rucked for. Most recently, the Bragg Tough, and Bragg Basic patches have been framed, letters written and sent to the parents of Wyatt Hatcher (aka Chicken Little).  He was a GRT who I met a year and half ago the day I decided to do Bragg he said he’d do it with me, so in his honor I wore his patch and sent them to his family!

Quote to live by? It’s a toss up. “Work Harder” is a compliment and command from Joe Baker and “It Could Always Be Worse” (in Bridget Lesnick’s voice as you are climbing 22 flights of stairs or running or doing whatever sucks). I literally think of all the ways something could be worse and trust me there is always something that could make it worse.