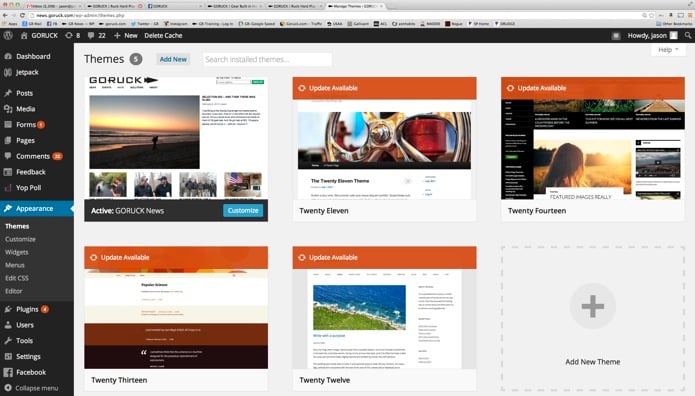 If you’ve followed this don’t call it a blog ha ha that’s the weakest word I hear most days unless Bert is around in his Forever 21 pants and he’s in full defense trying to be offense mode – you noticed that the layout changed. Finally and for good reason. Way back when we thought we were so special in every way. Truth be told, we’re similar to most places most of the time. We build stuff we sell stuff we write about stuff we publish pictures and words. Our culture and our values and what we do make us different in some ways, but those have nothing to do with e-commerce sites and blogging platform layouts. A perfect cover won’t actually write a book even though it’s what you see first and you judge as we all do.

So I made all sorts of we’re special beautiful snowflake mistakes and kept doing them for a long time because nobody likes to be wrong and when you’re wrong sometimes it’s less painful to be in pain than to admit you’re wrong. I digress. One of them was to have our team create a custom blogging platform within wordpress which is what this site has always been run on. It was meant to mirror the layout of the rest of the GORUCK website (e-commerce etc) which is not wordpress. WordPress is primarily a blogging platform much like facebook is a whatever social media platform, it’s essentially plug and play. The thought though was that none of the millions of pre-existing themes was “us” because they didn’t look like the rest of the site when truth be told the content is what makes it us, not the presentation.

And practically speaking, it gets worse. A custom site cannot be updated with new features. In the image above, you’ll see an old screen shot from the back end of this website. The layout at the top left was ours. Notice it’s the only one without the “Update Available” at the top. That felt like pain for us anytime we want to do anything new, like integrate video or image galleries since we couldn’t do them. Imagine a world where you can’t download any new apps on your iPhone and it’s something like that. And I did this to us, stupidly.

So we switched instead to an existing theme. Life is easier and it lets us focus more time on content creation and less time on being special.

One main take-away for life and anything in it. Find what you’re good at and do more of that – this is usually what makes you happy and what you would love to do whether you’re paid or not. The rest of the stuff in a harsh world – figure out how to play by their rules and best practices and not the other way around.

And if you’ve found what you love someone handed you a gift and spend less time judging the wrapping and more time reading what’s in the card and when it’s time for you to share the gift make sure to sign it with love.