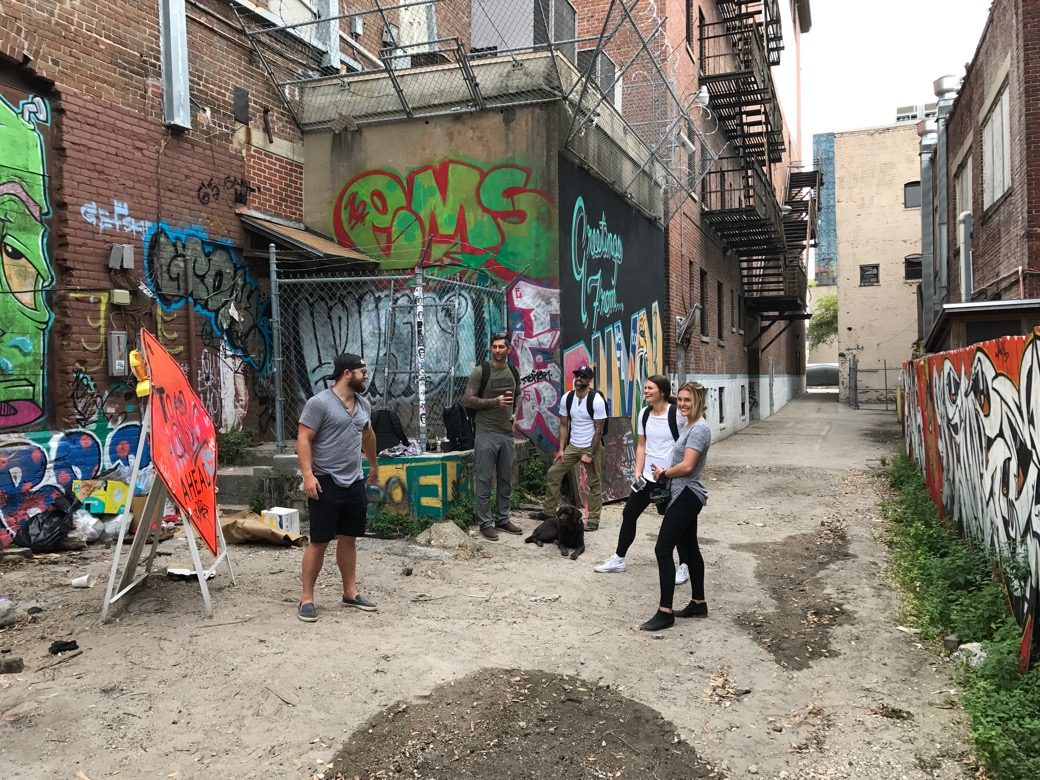 Wake up at 530, get picked up by Big Mike. Head to Christian’s apartment. It’s locked, he’s not answering his phone, we’re beating on a door that might as well be silent concrete. We grab a ladder to go around his apartment, I jump from the top of the ladder to climb onto his balcony only to find out that he actually locks his balcony door. Weird. The light’s on and I see him heading out the front door. Hey Big Mike Christian’s up, tell him to unlock this door so I don’t have to jump onto the ladder to get down.

Christian’s mumbling something incoherent, whatever.

We pick up Alyson and Lee’s coming too because she couldn’t trap him with the “you don’t have to come” line so everyone piles in. We head for HQ to grab the gear and stuff and link up with Lindsey who’s running the show. She tells me she needs gas in her car. I’m like, no. Never take two cars we can all fit.

Everyone piles in, Monster’s shotgun at my feet which he doesn’t love, I know because he’s staring at me with the I don’t love this face. First stop Starbucks. You learn a lot about people based on how many syllables it takes them to order, and there’s no hiding at the drive-thru. Latte this latte that almond milk and -chino this or that. It’s the soundtrack to when you take your fingers to zoom into something on your phone, a modern equivalent to hunting and gathering and, ummm, slightly softer. So it’s funny when Big Mike says Latte and -Chino, as if Andre the Giant were singing in a boys choir. 615 and finally the caffeine is starting to flow through our veins as we listen to house music that Lee hates cause it’s not Garth Brooks or something. Stay on track. We’ve officially crossed the ditch (the intracoastal that separates the Beaches from the not Beaches) to head into town to find some graffiti because we may live at the beach but don’t mistake that for soft, which pics out here can. Palm trees and perfect weather for doing nothing productive also happens to be great weather for life. City graffiti is universally urban jungle, from the cities of harsh winters and creativity and an energy that burns bright in the people who live there.

We’re trapped and we prod so finally Christian tells the parts of the whole story he’s not hiding about last night. He had been in Daytona at Bike Week with Chuck, only they didn’t know it was gonna be Bike Week.

Chuck wore swim trunks with side loading pockets and had his phone in there. At some point 6 hours after they thought they’d be done checking the town out Chuck’s phone had fallen out. Hey I lost my phone contact me on Facebook went the announcement. Made from Christian’s phone, no doubt.

You know that guy and so do we. Love you, Chuck.

Christian got home and the door was locked so he slept on his doormat cause he “forgot” his keys and his housemate wasn’t opening. How long ago was that Christian? I dunno said in pure Jersey, a couple hours.

We’re howling and he takes another sip from his princess tea.

The plan held and we got to the concrete jungle just before sun-up. It’s dark and deflating to escape the car into a parking lot that had towed all the vagrant cars already and there’s a big mural, which is what you call commissioned graffiti, and someone starts passing out Bud Heavy at an unGodly hour who was that. Alyson played something on her iPhone because Big Mike didn’t wanna keep his car running while we rocked out to house music that Lee hated. Some jackhammer was throttling in the background anyway, and I thought of the crew working it. All work is not equal, after all, they’re doing the only real work this morning.

Monster was a thing. We bring him for his looks but he didn’t know what to do when Lindsey started the sizing shots, assembly line style, and he wasn’t in them. So mostly he paced, at the expense of my shoulder and his leash.

The leash did better.

Before you know it it’s 9am which is like 8am because of Daylight Savings and it feels like a continuation of Daytona to Christian no doubt, and Lindsey has documented every ruck we build in black, which is more than I thought btw, on our friends. Oh yeah, she’s one of the 4 so someone else took those and Big Mike had to get talked into another Bud Heavy here-ya-go style.

Welp, that was easy.

Spot B was an alley ask Lindsey she told us a million times. The alley the alley the alley and nobody wasn’t sick of hearing about it and I figured it would suck for everything we were trying to do. My brain is wired to deal with worst case first, then adapt. Construction blocked the first entry, and I felt validated for my skepticism. But alas we flanked and oh the color, the concrete jungle in an area barely bigger than GORUCK HQ. The party rages and the Bud Heavy’s woulda hit me in the face but I grabbed ‘em out of Lee’s ruck before they had the chance.

Magic time so there’s almost nothing I won’t say to get people to smile, sometimes horribly. As in, I’ll say something to Christian or Big Mike I know will create an emotionally triggered smile by any means necessary. Snap snap goes Lindsey. If it’s a smile how bad can it be what you said? Truth: pretty bad. But this is why I love to shoot with my friends and not some stiff actors or whatever. I know them, they know me, it’s all in good fun. Life’s better that way. Team room style. Some of the pics of Christian laughing while wearing GR1 – wait till you see ‘em – the things he was thinking about in that moment, well, they’re not for the faint of heart. I go back with that dude 10 years. He manages a lot at GORUCK, like quality control of our gear and the vendors who build them and we have some crazy stories from California he’ll probably share some time, especially since I’m bringing them up now. Today, here is where we are and it’s good fun.

Nobody ever sat on their deathbed and said man I wish I’d slept in and skipped awesome. Life’s too short not to smile by any means necessary. Especially at 10, or is it 1030 by now in the morning in a graffiti junction in Jacksonville, Florida USA.

Oh there you are. You’re up and we need you because two things on a concrete wall – not so fun, even with graffiti and color. Next to Monster though, awesome.

Lee can’t keep a secret so then everyone knew he had to piss – or is there a nicer word for that, like urinate?, I dunno – anyway he found a fence and Alyson who tolerates him somehow (something they both say about emily, of me, I’ll add) says something about how gross that is. I’m thinking, ain’t the first time in this spot, does your nose even work lol. And when you gotta go you gotta go. Got your back, cuz.

The iPhone speakers are at their max and so is the color and our goal is whatever’s in front of one camera lens and yet the real story is back stage. Like life.

But snap snap goes Lindsey, unphased, as if the coffee hadn’t worn off and good on her. The lighting has some issues so she fixes the shade cover and the ISO or whatever – cameras will be a computer soon, probably made out of that molten stuff from Terminator 2. Till then, the pros got it.

So then once everyone had their fill of our style morning because there was no other option we took the rucks we were wearing and found the car. Lindsey’s car’s mostly empty gas tank wasn’t any emptier because it was still at the Beaches – never take two cars, you can always fit, it’s more fun that way. And we piled back in better for the wear and Big Mike sighed a big sigh of relief and so did one of his tattoos as we crossed over the ditch and the brunch spot with imitation Budweiser with a lime in it no less found us and Monster made some friends and we ate some whatever showed up – mostly chips and salsa – and then came the bill like any other and it’s always worth it on a Sunday in Jacksonville Beach, Florida,

Eventually I made it home and got a text from Lee, to all of us: