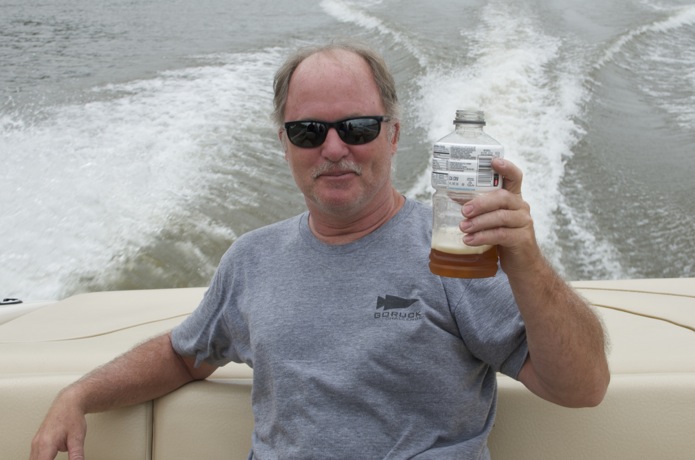 Team Room rules state very clearly for those who know ‘em that admitting to doing something for the first time means you owe a case of beer. And in a world where experience is the ultimate currency and steel sharpens steel it’s a good rule and I’ve adopted it for life and my dad was like yeah this is my first time boatin’ the Ohio do you want the case of beer now or later and don’t forget, son, that this is your first time, too.

And we just smiled in absolute agreement that whenever beer is currency all is right in the world. 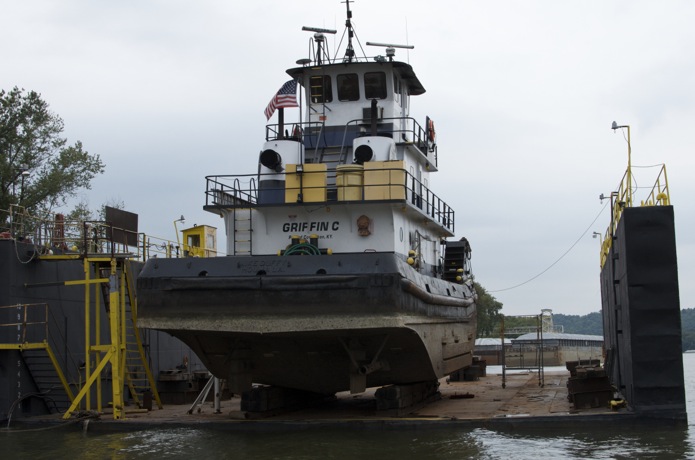 And oh the things you’ll see when you actually show up to look. Cool things and new things and different things and sometimes the baseball stadium I still call Riverfront even though they sold that name to the Insurance company in the background I’m old fashioned like that and as usual grandparents are right about most things. 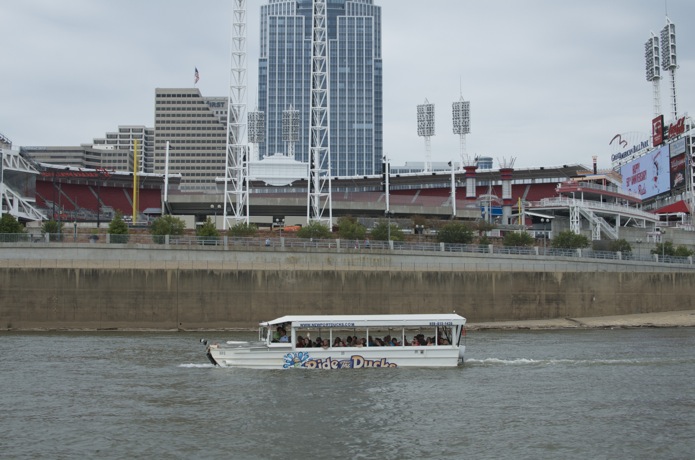 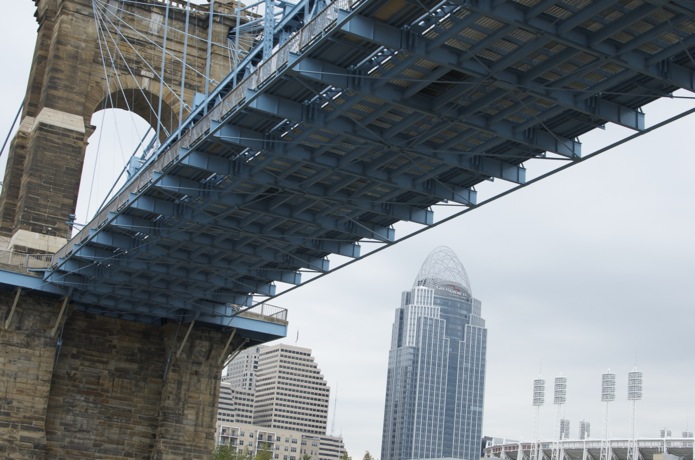 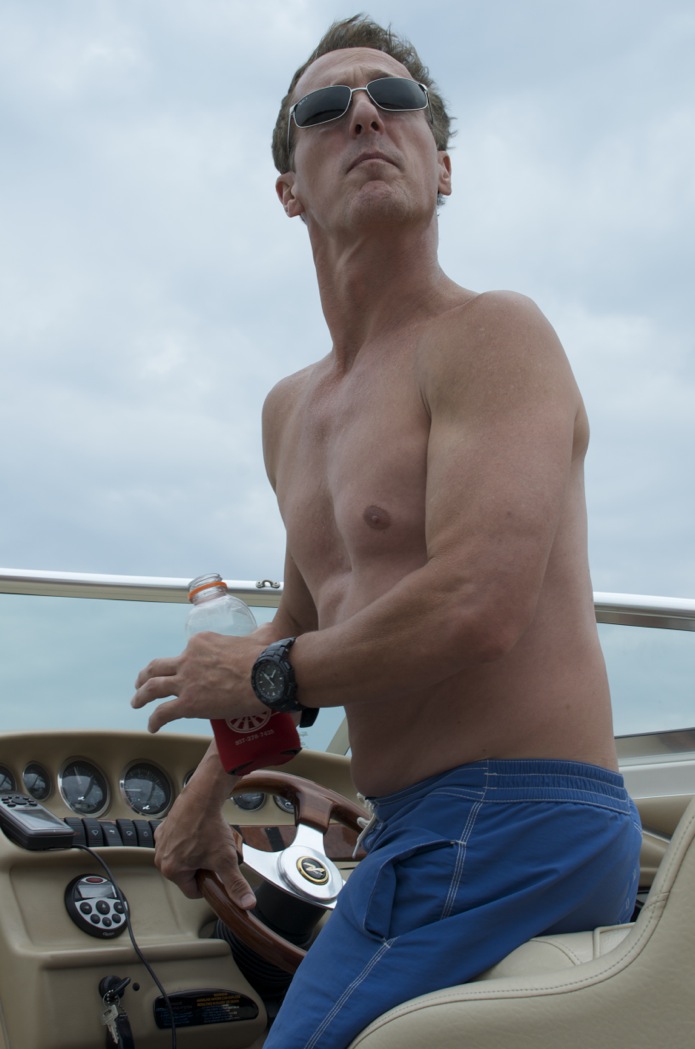 Insert a rare moment where Phil Mr Serious OK not really wasn’t scouring the river for driftwood I mean when Jay started driving a bit it turned into two dudes with hands on the steering wheel and that’s just weird but nobody can avoid the wood like Phil ask him he’ll tell you. 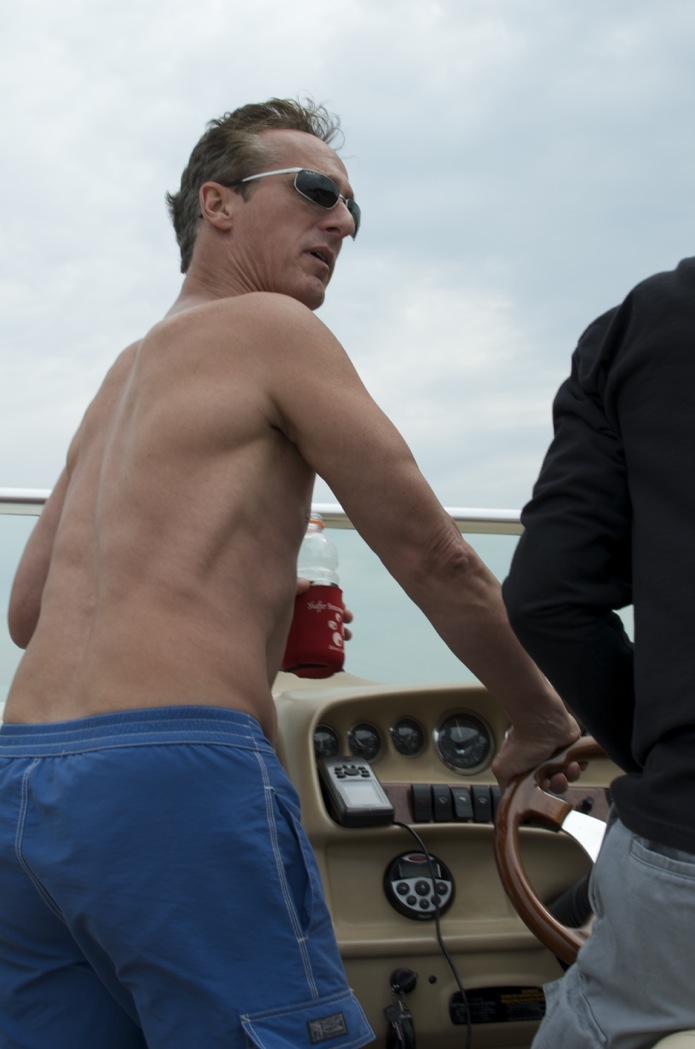 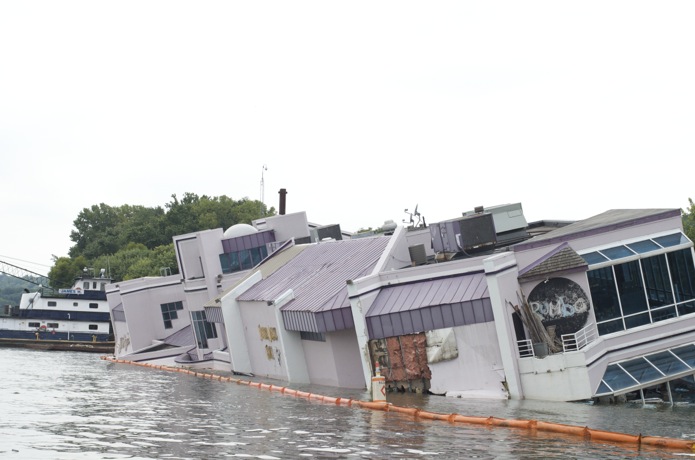 We had a nice Waterfront spot in mind for lunch but the world had a different plan. 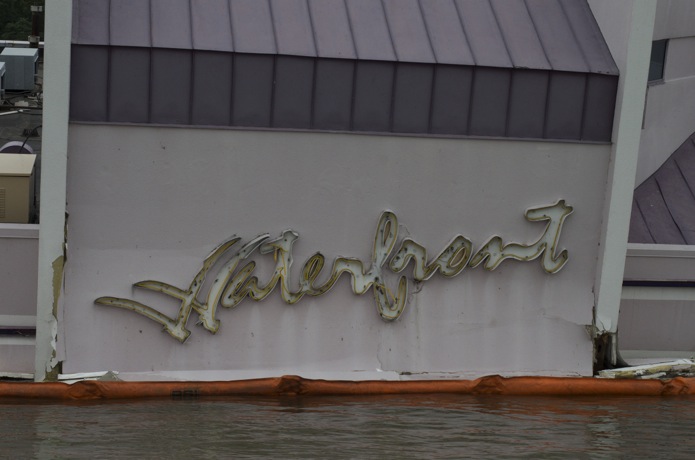 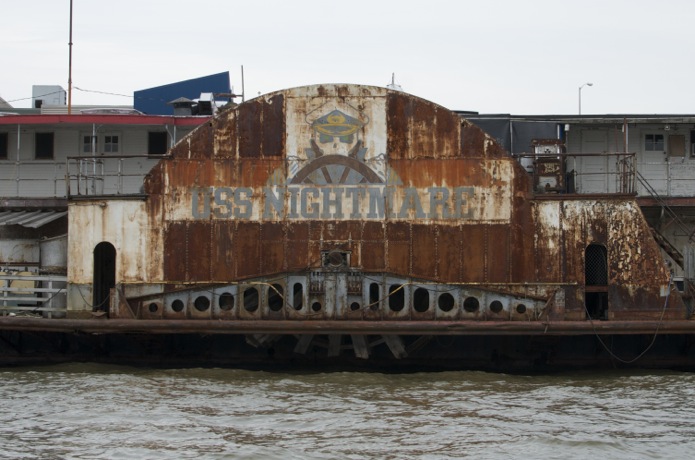 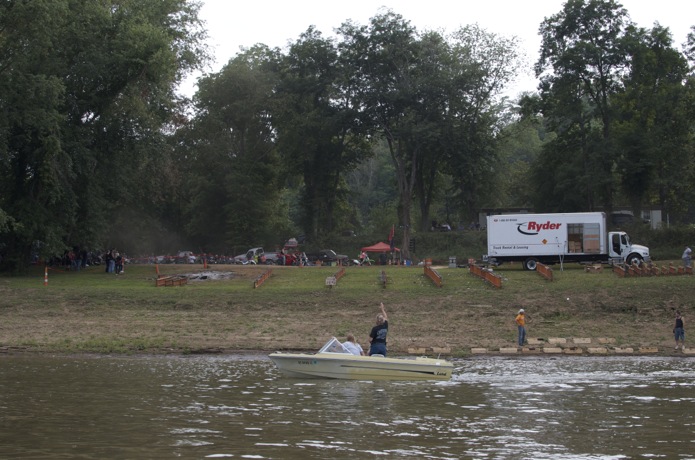 I texted my buddy JB whose whole family is from Kentucky and I’m like the best thing about Kentucky is that you have the best view of Cincinnati ha ha and oh by the way yes that’s a Private Beach says the sign and yes the Ryder is full of fireworks they’re setting up and yes they’re racin’ bikes one after the other with no apparent logic to a tournament more just to do it. I’m convinced that the “i” culture doesn’t have anything on getting together with friends I mean would you rather spend today on your iPhone with your iFacebook or would you rather be in someone’s backyard drinking a few cold ones and seeing what happens next? 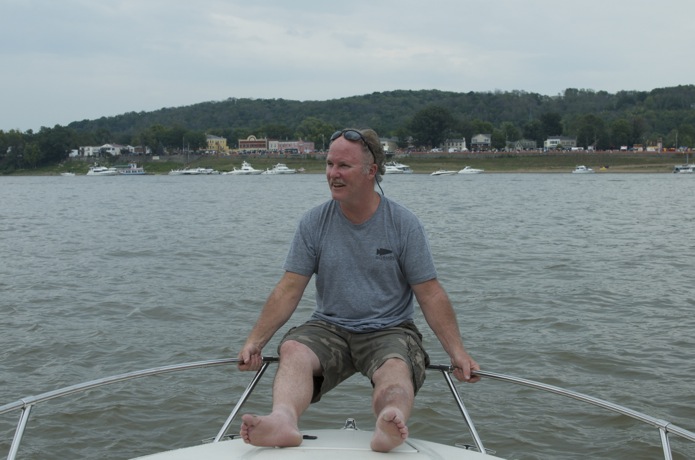 Here for the show, ready and waiting but no fireworks till the sun goes down so the guys had a replacement lunch spot in mind. 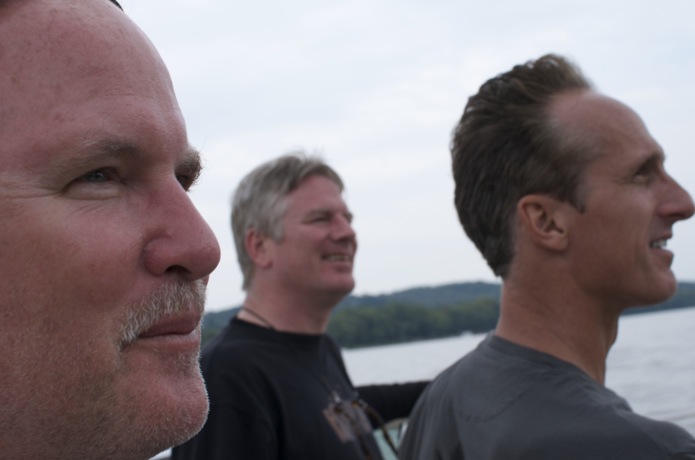 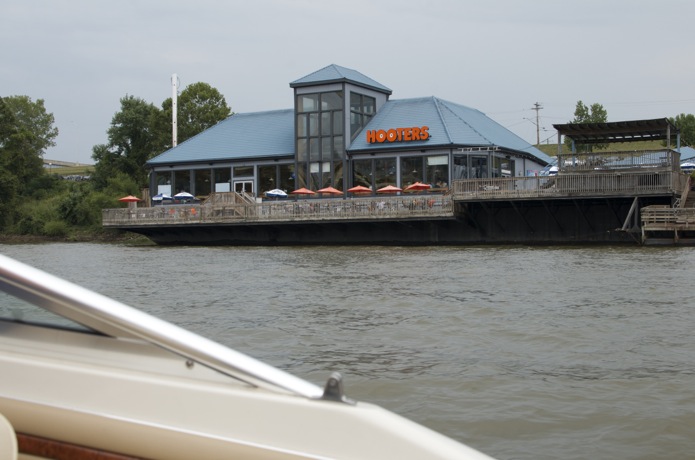 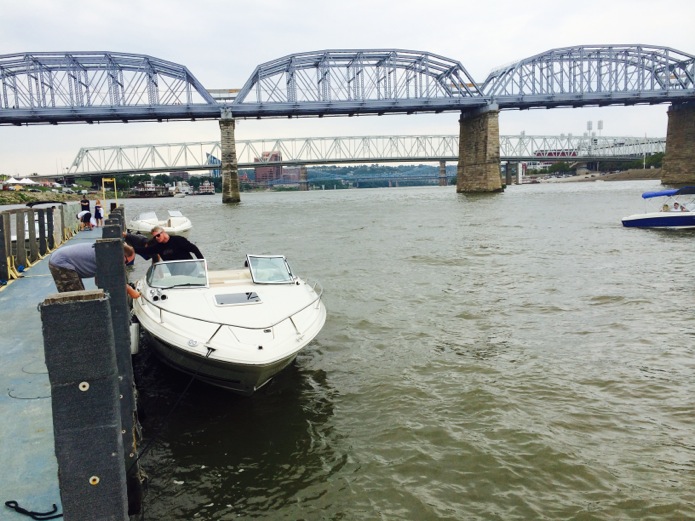 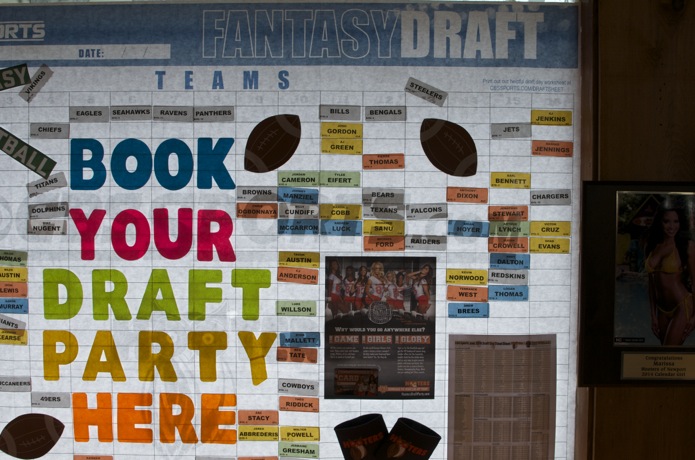 If you’re gonna go into the restaurant business and do the freezer to fryer to served with some hot sauce then the beer better be cold and the atmosphere not boring and at least Hooters has that going for it. 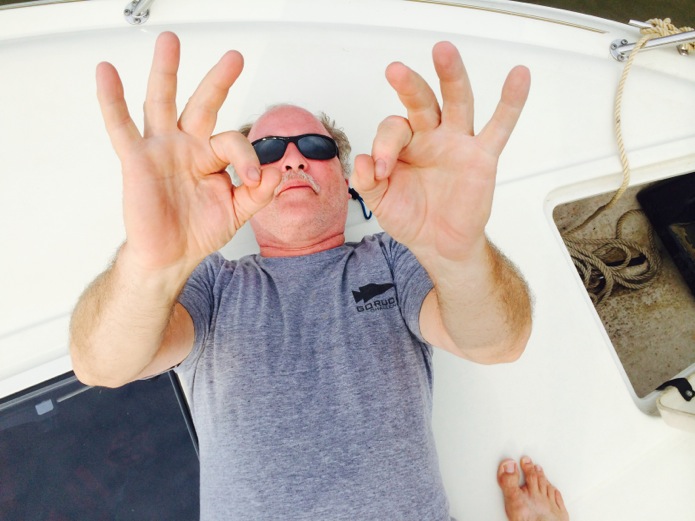 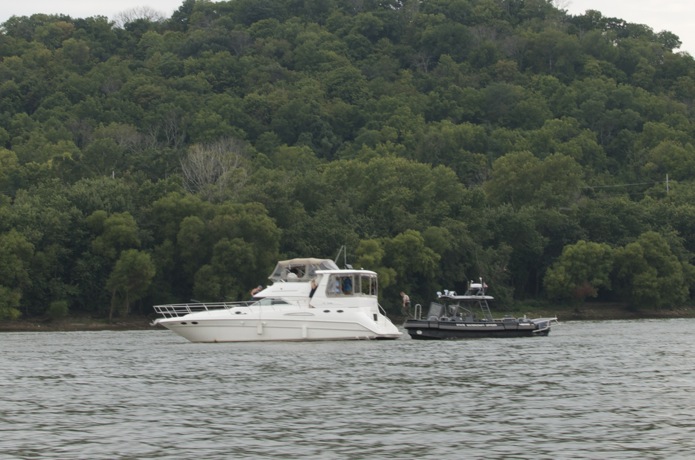 And then things took a turn for the interesting and the cops started boarding boats isn’t that what’s going on so off we were only to find out later that the cops were there to help a broken down boat whose captain probably didn’t know how to avoid the wood like Phil does but no matter it’s still time to speed away and who was it that owed that case of beer who cares as long as it’s someone. 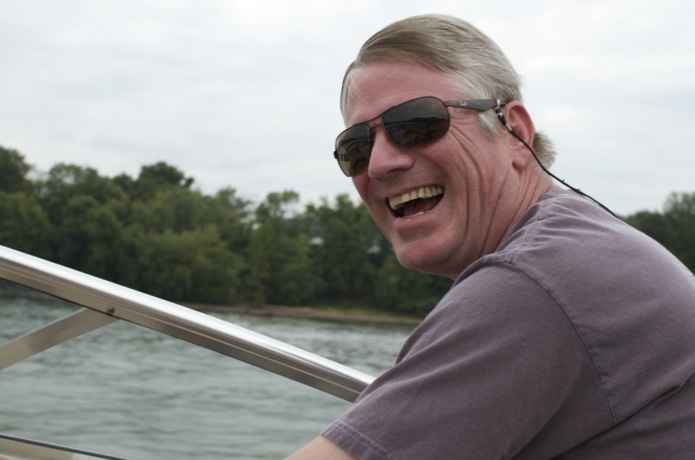