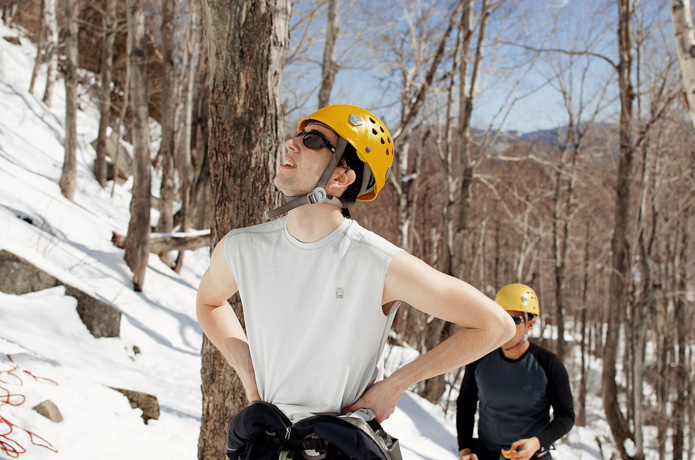 Last Saturday at 0700, I met up with 68 men and women at the Irish Hunger Memorial in downtown Manhattan to get our asses kicked as part of the inaugural class of the GORUCK Light Challenge. I’ve been wanting to do a GORUCK Challenge for a while and when I found out they were doing a Light version and the first would be here in New York City, I was quick to sign up with my buddy. This was the very first Light Challenge so we didn’t really know what to expect. Most of us were aware of what the GORUCK Tough Challenges are all about but didn’t know where Light would sit on the suck scale.

As we loitered that morning, half dizzy as the second guessing swirled through our heads and half groggy because of the coffee we decided to forgo, our Cadre startled us out of a daze as you would expect from a US Special Forces leader. At our cadre’s command, we attempted to organize ourselves into formation for role call, brick inspection, and splitting off into our two groups to start the challenge.

What we were about to get into was a military-inspired physical and mental endurance team challenge. I was confident that morning, as we saw the sun starting to peek above the skyline, that I would have the mental endurance to get through the day. I was nervous about my physical endurance but became even less sure when I could see we had 34 people but no team. We were a mess. We had trouble following basic orders and quickly realized that without pulling together, it would be a long day ahead of us.

GORUCK lives by the phrase Under Promise, Over Deliver and we learned early that Light did not mean easy.

Maybe it was the intense hour of push-ups, bear crawls, and fireman carries, or it could have been the freezing cold pond we found ourselves waist-deep in, but that daze we began with started to lift. We started to see strengths and weaknesses in our teammates and figured out ways to work through them. We learned that it wasn’t a race but that time was still an important thing and we’d have consequences for missing time objectives.

The saying goes, “Embrace the suck.” Embracing it is the only option because the suck isn’t something you can fix. More training doesn’t fix the suck. The suck is baked in; it’s part of the challenge. What you don’t have to embrace is the things that you suck at. We were too quiet. We weren’t telling our teammates when we were tired from carrying the team weights or our “coupon”—a special present from our Cadre that we picked up along the way, in this case, a big sandbag. We thought we were toughing it out by keeping our mouth shut but what it meant was that we were wrecking ourselves.

We marched through Manhattan to our different objectives as the morning sun gave way to a chilling wind. I guess we should have expected it because change can suck, but our objectives could quickly shift and our Cadre would issue a FRAGO—where something happened in our imaginary battle and we would need to adapt. This usually meant “casualties.” We would have to carry our teammates. At the worst, we had five casualties. Carrying five people around the streets of Manhattan, through the busy St. Patrick’s Day parade crowds really sucked and that’s when we learned how to be team.

It was moments like this where we were getting near the edge of our physical capacity when we would have lapses in communication with our team. Walking through midtown Manhattan on a normal day is a challenge; doing it with a team of 34 people in already crowded streets with people on your shoulders makes things like all getting across the street together before the light goes red is a real issue. It only happened once (because we learned from it fast) but only blocks away from one of our objectives of making it to the Empire State Building, our team got split up by a red light. Cutting through traffic carrying a litter with a casualty in it isn’t a great idea no matter how much of a New Yorker you think you are. We paid for our lapse of communication that caused the separation by doing lunge walks—CARRYING PEOPLE—for the last two blocks to our objective. The slowdown from the lunge walks caused us to be overtime by 1 minute and 30 seconds, which we paid for with 90 reps of some of our favorite PT exercises, like high-lifts of our brick-filled rucks and burpees.

We went from clouded to sharp minds when together we realized that the suck of the PT was something we’d have to embrace but the suck of our team communication could be fixed.

We each had to be open about when we were tired and needed help. By having team leaders constantly checking with how we were doing, swapping in fresh legs when needed, and rotating people through positions, we were able to work together to survive through the rest of the Challenge. The snow that started to fall in the last couple hours was a nice touch to see us through the end. In 11 miles and—in Under Promise, Over Deliver fashion—7 hours for what was advertised as only 4, we came to be Light Class 001.

With a Light patch on my ruck, it’s time to take things to the next level and train for Tough.