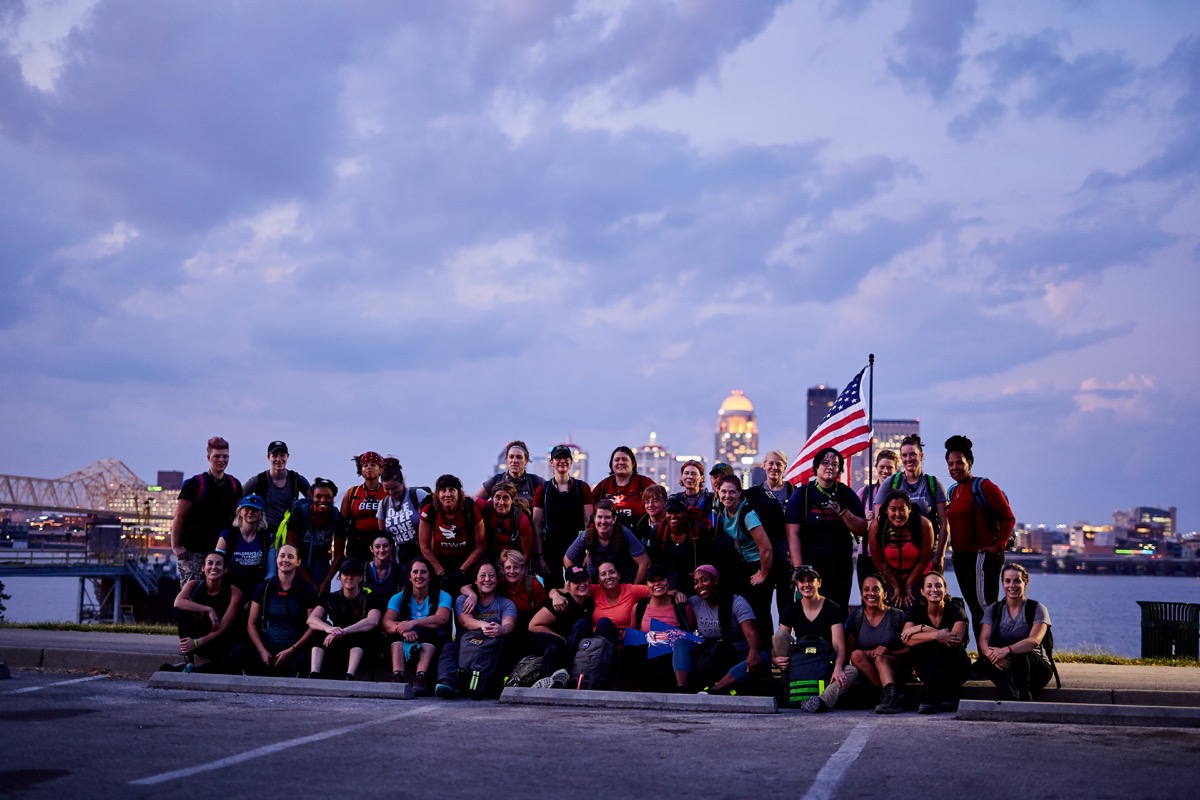 In 2014, GORUCK came up with the idea to have an All-Women’s GORUCK event in Miami, Florida. Spurred on by the message of “Women have been the strong links at GORUCK events since forever” and “Women don’t quit”, over 150 of us showed up to an epic girls’ weekend,  with 7 of the best Cadre, ready to prove that statement to be true. And we did.

That weekend, a lot of weight was moved, women were pushed to their limits, and challenged in ways that many of us hadn’t experienced up until this point. That weekend incredible friendships were formed, a lot of laughs were had and memories were made. Honestly, it was just like any other GORUCK event that any of us have done except this time… women were everywhere.

We were carrying everything – a wine barrel, a telephone pole, 120-200# sandbags, and even each other. We were the TL (Team Leader), the ATL (Assistant Team Leader), the workhorses, and the flag bearers. We did hundreds of burpees, were in and out of the ocean more times than I can count and witnessed the most beautiful sunrise on the beach, albeit while half asleep.

Up until this point, many of us had done events where we were one of a handful or THE ONLY woman at an event. There was always someone that was so much bigger, stronger and much more likely to jump at the chance of carrying those heavy things or taking the lead. Let’s be honest, some of you guys jump much faster and louder at those opportunities than we do. But at this event, there was no “Big Dude” to pass those things off to or fall in line behind. There was only us and we had to figure it out. We may not have gone fast, or even far in some cases, and we may have had to share that weight between multiple teams, but we made it work all the same.

And for many of us, that was a big deal.

Speaking personally, it can be challenging being a woman in a male-dominated endurance community. For every incredible teammate (special shoutouts to my male battle buddies) who are encouraging, supportive, and challenge others in a positive way, there’s always one who is the complete opposite. Most female GRTs can tell you a story about a time where she felt like (or was told that) she couldn’t help the team because she was too short, too quiet, too weak or was flat out ignored due to (perceived) inadequacies of her gender. If she can’t tell you a story that has personally happened to her, she can share one that has happened to someone she knows.

I also bet she can tell you a story about how she purposely didn’t carry the weight, volunteer for TL, or get on a log team because SHE didn’t think that she could. She was worried that SHE couldn’t carry it long enough, that SHE would need help, or that SHE would mess up and let the team down. So instead of trying, she slides to the back and stays on the one or two things that she knows she can do well or just tries to blend in unnoticed.

I’ve been that girl.

This past weekend, over 60 women from around the country gathered in Louisville, Kentucky for what is now known as the Badass Babes Tough, Light, and Scavenger event weekend. It’s the first time I’ve been back since Miami and it was just as motivating, inspiring and uplifting as the first one.

There’s something special about being in the middle of that many badass babes. While the typical GORUCK PT, team-building, and carrying heavy things is all still happening, it’s an entirely different feeling. There’s a camaraderie and level of teamwork that seems to happen almost instantaneously. There’s a lot of talking – at least 3/4 of which was productive and on topic – and no arguing. When there was a disagreement, the leaders listened and reassessed their plans to take suggestions. There were people cheering each other on, assisting each other on sandbag trades and taking their turn on the jerry cans (which will always suck and will be the least favorite of all the things we have to carry). I watched women, who hadn’t done so in previous events, take on leadership roles and shine. Every woman stepped up and pushed themselves. There was laughter, some tears, some dancing and a whole lot of singing. I’m pretty sure Lizzo would have been proud to hear us singing “Truth Hurts” on the banks of the Ohio River.

I can’t tell you what every individual got out of this event, I can only share my story, but I’d like to think that each of the women who were in Louisville are going to go into their next events with a little more confidence and a lot more willingness to put themselves out there.

But don’t just take my word for it. If you know someone who was there, ask her. It’s worth listening to and if you are a woman in the community, and you haven’t done one of these, come out and join us for the next Badass Babes events in Austin, TX on the weekend of November 6-8, 2020!