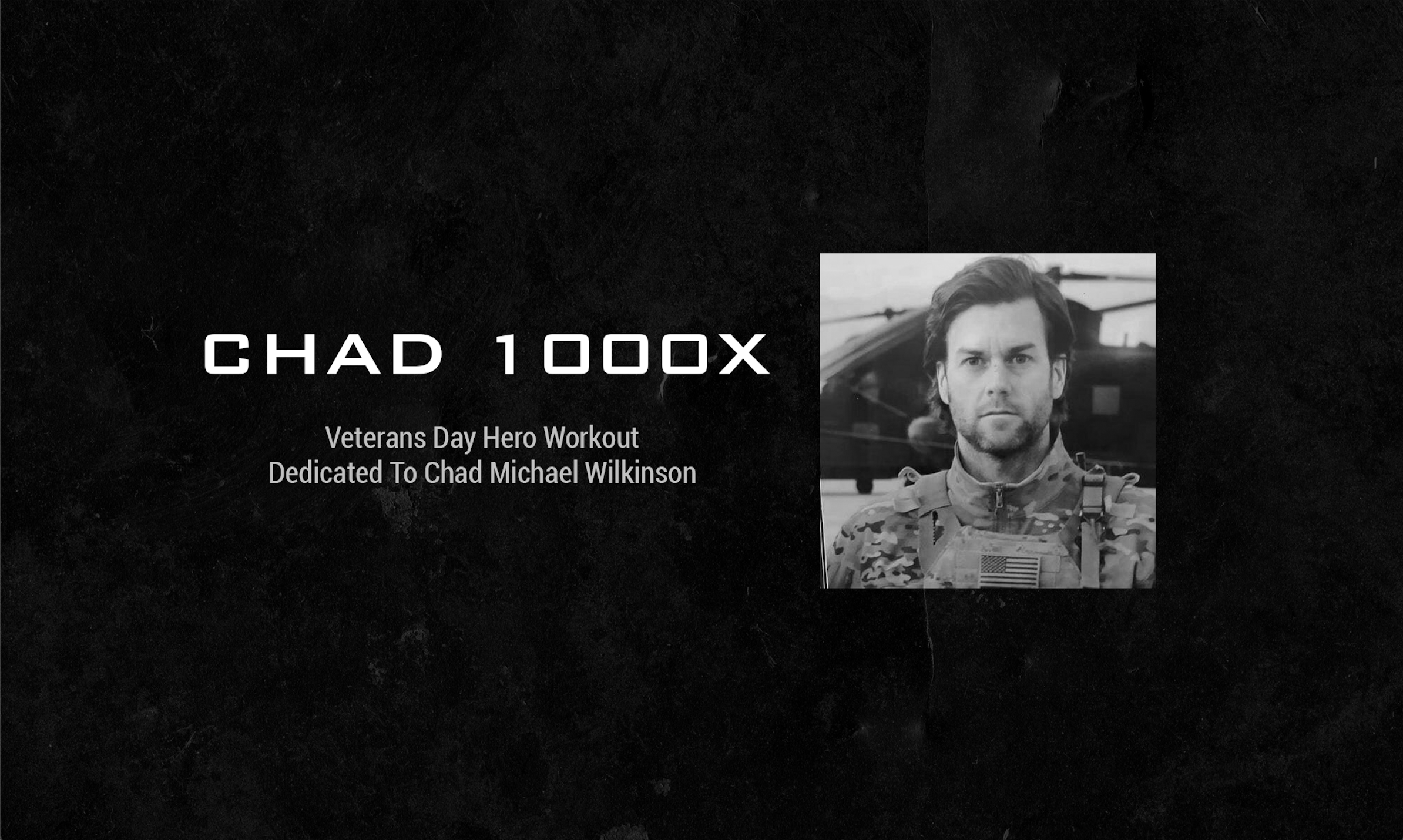 This Veterans Day, GORUCK and the Navy SEAL Foundation (NSF), an official GORUCK partner, joined forces with Gold Star spouse Sara Wilkinson to raise awareness for suicide prevention by honoring the life and legacy of Navy SEAL Chad Wilkinson. On October 29, 2018, Chad took his life due to the effects of numerous deployments, several TBIs, blast wave injuries and PTSD.

The fundraiser was promoted on GORUCK’s website and social media platforms using #CHAD1000X. Over 4500 people from all over the world participated by ordering Chad1000x patches and t-shirts and completing a hero workout in solidarity with Chad and others lost to suicide. By the end, a total of $104,125 was raised and donated to brain and mental health programs funded by the Navy SEAL Foundation.

Working in lockstep with Sara Wilkinson and Chris Irwin, the Director of Partnerships at the Navy SEAL Foundation, one month before Veterans Day GORUCK announced the hero workout “Chad” in honor of Sara’s late husband, Navy SEAL Chad Wilkinson. On October 29, 2018, Chad took his life due to the effects of numerous deployments, several TBIs, blast wave injuries and PTSD. We wanted to honor Chad’s life and legacy by raising awareness for suicide prevention through a virtual fundraiser, but also challenge others to do a workout around Veterans Day that Chad had invented to train to climb a mountain.

“My husband, Navy SEAL Chad Wilkinson, served honorably for 21 years. When Chad took his life he had everything to live for: myself and our children, extended family, his fellow brothers and our community. This is a silent disease where symptoms, triggers and warnings are often recognized too late. Chad is not alone, this is a silent epidemic with the enemy sneaking quietly into our homes and it has to stop. We want to use Chad’s life and legacy to raise awareness for suicide prevention. Our hope is to remove mental health stigmas, and encourage people to reach out, one step at a time, no matter who you are. Our goal is to honor Chad and all Veterans currently struggling this and every Veterans Day moving forward. I hope you’ll join me and our community in doing the Hero WOD that Dave Castro named after my husband Chad, supporting the Navy SEAL Foundation.” — Sara Wilkinson

The hero workout “Chad” consists of 1,000 step-ups with a weighted rucksack. At his funeral, Chad’s wife mentioned that he did 1,000 step-ups with a 45 pound ruck on a 20” box to train for climbing Mt. Aconcagua, the highest peak in South America that Chad successfully summited solo. Shortly thereafter, Dave Castro, a former Navy SEAL and Director of the CrossFit Games, completed this workout with others within the Veteran and CrossFit communities to celebrate Chad’s life and honor his memory.

On December 14, 2018, Dave Castro stated, “A few weeks ago we lost an American hero. A friend of mine and someone I worked with when I was in the Navy. At his funeral his wife mentioned that he did 1,000 step ups for time with a 45 pound pack on a 20” box to train for climbing Mt. Aconcagua. Tonight I did this workout with James Hobart, Adrian Bozman, and Jimi Letchford. We did it as a celebration of his life and to honor his memory. If you are looking for something to do this weekend give this one a go and keep Chad in mind.”

1000X Step Ups Completed as a team, partner, or individual for time.

“Even while serving as a SEAL, Chad took time to scale up to the Expert version. There is zero shame in starting Slick, or with Standard weight, or in sharing the steps with a friend.”
— Sara Wilkinson

Leading up to Veterans Day, we encouraged all of you to commit to doing the “Chad” Hero WOD with friends, just like Dave Castro had originally done. Thousands of people from all over the world and walks of life, stepped up to the challenge by making a donation through the purchase of the #Chad1000x t-shirt and patch, started training up, and recruited friends to train over the next 4 weeks, culminating in the completion of 1,000 step-ups, one way or another, on Veterans Day.

On November 7, Sara Wilkinson prepared a parking lot in Virginia Beach with boxes as far as the eye could see so friends, family, and members of the community could gather to honor her late husband, while raising awareness for a silent disease where symptoms, triggers and warnings are often recognized too late. “Our hope is to remove mental health stigmas, and encourage people to reach out, one step at a time, no matter who you are,” Sara stated with her son by her side.

Across the country in San Diego, Sara’s daughter Kinsley was the photographer for another Chad1000x workout in honor of her father.

On November 29, GORUCK wrote a check via our 501(c)(3) organization, Java Forever, to the Navy Seal Foundation (NSF) in the amount of $104,125 and while we are proud of this amount, the work to honor Chad’s life and legacy and raise awareness about this silent epidemic is just beginning. We remain extremely grateful to the GORUCK community for your support. Service has always been our northern star and because of you, every cent of the dollar amount mentioned above will go towards the brain and mental health programs funded by the NSF.

We plan to honor Chad’s life and legacy every year at Veterans Day until the end of time. A big thanks to everyone who showed up this year, you have made a difference. Be on the lookout for Chad1000x to raise even more awareness for veteran suicide prevention next year.